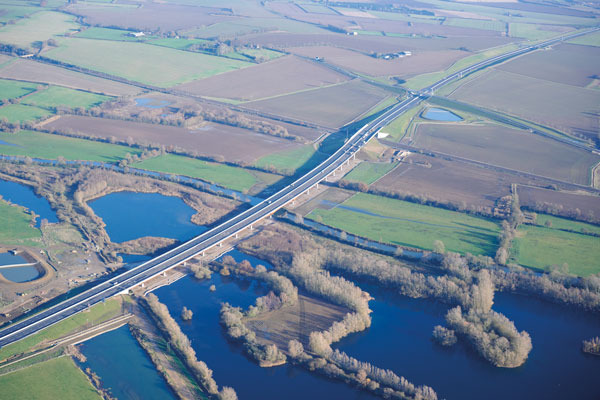 Two projects on a major £1.5bn road improvement scheme highlight why steel is the ideal material to form long bridges quickly and efficiently.

The old A14 was notoriously congested and suffered from numerous delays as it is used by almost 85,000 vehicles every day, far more than it was originally designed to accommodate.

The improvements include a new bypass to the south of Huntingdon, widened sections of both the existing A14 and A1 trunk roads, the creation of new local access roads, and improved junctions.

There are numerous bridge structures along the route of the scheme including the scheme’s showpiece bridge; a 750m-long viaduct over the River Great Ouse, and two identical 1,050-tonne bridges to carry a major roundabout at Bar Hill Junction over the new A14. Weathering steel was used for all three structures to provide the required durability with minimal future maintenance. 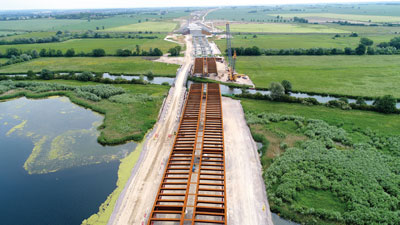 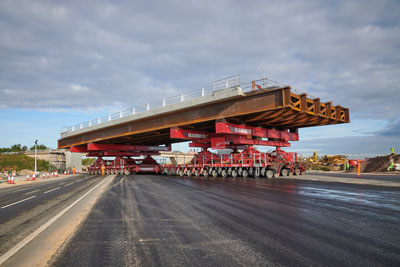 Commenting on the use of steel, A14 Integrated Delivery Team Construction Director Jim McNicholas says: “Prior to coming to site we carried out a value engineering exercise and from this we decided that any structure that was 40m or longer would be built with steel.”

The River Great Ouse Viaduct required 6,000t of steel, comprising 76 separate main girders and 800 cross girders. The ladder deck bridge spans the river itself and a large area of floodplain on either side. Supported on 16 pairs of piers, most of the main girders are 40m-long, 2m-deep and weighed 50t. The section of bridge that crosses the river has a longer span requiring more complex girders, with larger, deeper haunches to carry the greater load.

Due to the height of the haunch girders, they had to be transported lying on their side. This meant Cleveland Bridge had to devise a method of righting them and then lifting them into position once on site. A claw assembly was designed that clamped around the top flange and rotated the girder into an upright position as it was lifted. Once the girder was upright, a slight move in the position of the lifting shackles in the claw enabled the girder to be lifted into place.

In order to produce the cross girders more efficiently, a new welding procedure was devised that involved modifying the T & I machine with two welding heads on each arm, instead of the usual one, allowing twice the amount of weld metal to be placed per metre per minute.

A time-saving construction method adopted on this viaduct was the use of precast concrete slabs for the deck rather than the more traditional insitu concrete deck slab. This meant that the concrete deck units could be installed simultaneously, while steelwork erection was still in progress further along the bridge. This construction sequence demanded close coordination and also meant that every piece of steelwork had to be fabricated to extremely tight tolerances to ensure a precise interface with the precast concrete slabs.

A temporary platform on the floodplain under the length of the bridge provided a solid base for cranes and lorries, but a different crane was offered to the one originally specified. By using a 600t-capacity crawler crane in place of a 300t-capacity crawler crane, the installation team could install all girders from one position at each ‘bay’, as well as being able to install all the heavy girders at the river span section. By minimising the crane movements, an installation rate of one bay per week could be maintained and even accelerated during periods of good weather.

The viaduct was completed on budget and ahead of schedule.

The installation of the twin bridges at Bar Hill Junction over the new A14 maximised the advantages of offsite steel fabrication and rapid assembly to improve programme times, reduce environmental impacts and minimise disruption to road users.

The original plan was to erect the bridges piece-by-piece using a crane. This would have involved closing the A14 for a number of weekends, causing significant disruption. However, a more cost-effective scheme was developed that allowed both bridges to be constructed offline prior to installation, and then installed using self-propelled modular transporters (SPMTs).

Following unforeseen programme delays, the site erection scheme was modified to reduce the time required on site even further. Instead of delivering the bridges as part-length paired-girders, they were delivered as 12 full-length single girders. This removed the need for main girder joints to be welded on site, which reduced the overall programme by three weeks. This also significantly reduced the number of deliveries to site from 18 to 12, minimising environmental impacts from transportation.

All steel components were fully trial assembled at the factory prior to delivery to ensure accurate fit-up. The girders were then delivered to a large temporary set-down area that was created close to the bridge site. Upon delivery, the single girders were placed onto specially constructed trestles and braced together. GRP permanent formwork and cantilever edge formwork were then added and the insitu concrete deck slab cast. The offline deck slab construction significantly reduced the overall construction programme.

Civil engineering works on site, including the construction of the concrete abutments, were undertaken in parallel with girder fabrication, so close collaboration was essential to ensure that both elements interfaced perfectly.

The A14 was closed to traffic at 9pm on a Friday to allow the sections of the existing A14 carriageway to be infilled and surfaced. The fully concreted bridge decks were then lifted from the trestles onto the SPMTs, and manoeuvred at less than 1mph onto and along the carriageway. The decks were positioned by the SPMTs and lowered precisely onto the concrete abutments.

Both bridges were installed during a single 11-hour period and the road was clear for reopening at noon on Sunday, an incredible 18 hours ahead of schedule

The judges were impressed with the innovative solutions the project team employed to minimise disruption, optimise the programme and ensure flawless execution on site.