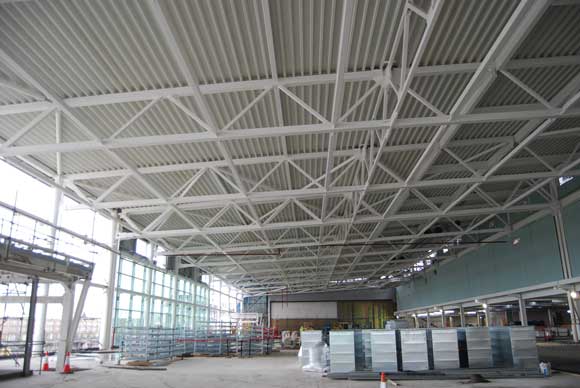 A steel-framed terminal extension building, featuring internal spans of up to 36m, is the centrepiece of Manchester Airport’s Transformation programme. Martin Cooper reports.

Known as the Manchester Airport Transformation Programme, the scheme, which began in July 2017, consists of an extension to the existing Terminal 2, the construction of a 3,800-bay multi-storey car park, a new baggage sortation hall and three new piers, one of which has a link bridge.

Structural steelwork is playing a crucial role in the programme as all of the new structures are steel-framed, aside from the concrete-framed car park. Working on behalf of main contractor Laing O’Rourke, William Hare is fabricating, supplying and erecting 11,300t of steel for the project.

Rob Stewart, Programme Delivery Director for the Manchester Airport Transformation Programme, says: “This is the largest infrastructure project in our history and one of the biggest seen in the North of England for the last decade.

“The airport is committed to the region benefitting through the scheme, so it’s been great to have William Hare on-board, especially with the affinity it has to Terminal 2, having worked on the original in the late 1980s.”

The Terminal 2 extension is the centrepiece of the project and is scheduled for completion in April 2020. The six-storey extension measures 160m-long, has a gross internal floor area of 86,500m² and will increase the terminal’s overall size by 150%. The new structure has required just over 9,000t of steel, which equates to 9,000 individual pieces needing more than 130,000 bolts. 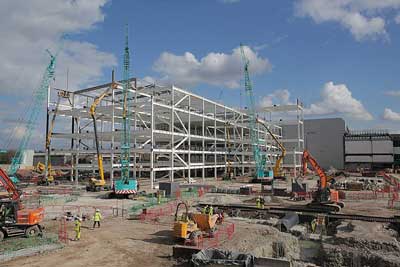 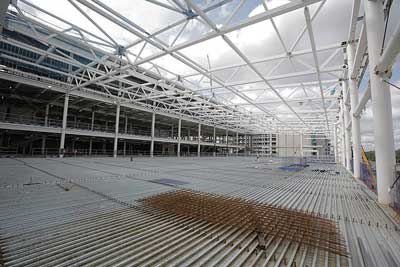 All of the terminal’s floors are compositely designed 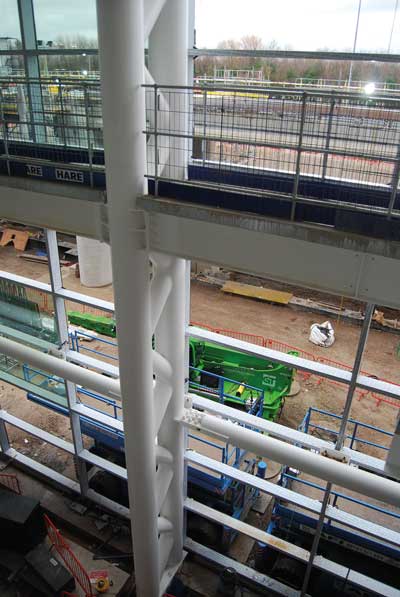 One feature lattice column is located on the main façade

Founded on 1,345 CFA piles, the terminal’s compositely designed steel frame is predominantly based around a regular 12m × 9m grid pattern. Three sway frames, which run the length of the extension provide the overall structural stability, while a movement joint cuts the building in half, alleviating any challenges associated with its length.

“It’s a very complex steel frame and so the best design was to go with sway frames as opposed to stability-giving concrete cores,” explains Laing O’Rourke Project Leader Tim Brown. “This method was also quicker as the steelwork was able to start being erected without us having to wait for any cores to be completed.”

BuroHappold Director Julian Sheppard adds: “The client was keen for us to minimise the number of movement joints, because they create operational issues, but this created a massive structural analysis challenge for us – how to analyse the steelwork with significant gravity and lateral forces including blast as well as controlling the enormous build-up of thermal thrusts and stresses, caused by the lack of movement joints.”

The solution was to adopt several analysis models for each primary load case, as these were more manageable. Then the team wrote computer programmes to pull the separate analysis models together to create a combined model.

“This meant we were able to alter variables as the design developed and have the software easily process large amounts of data very quickly. This data processing technique proved essential in delivering the steel design to the tight programme,” says Mr Sheppard.

The design also allowed William Hare to erect the extension in three sway frame strips. Beginning with the central frame, which was erected to its full height, the two adjoining areas on either side were then completed using a similar method.

William Hare had up to 10 steel erection teams on site, each with their own dedicated crane. Having so many cranes on one site was logistically challenging, especially as they could not overslew the adjacent airfield or the operating Terminal 2 building.

The middle sway frame section of the extension accommodates three modular mega-risers, each measuring 8m × 11m and containing much of the building’s services.

Each riser consists of eight fully-assembled modules, each weighing 8t. Once the central area’s steelwork was completed, and before the side sway frames were erected, the modules were lifted into place through gaps left in the frame.

“A lot of detailing had to be done on the steel modules and the bracketry they fit to inside the voids as there was only millimetres of clearance during the lifting process.”

The overall layout of the structurally-independent extension mirrors the adjacent steel-framed terminal building. Once construction is complete, the two will be connected, as various breakout zones will be formed in the existing partition to allow a seamless transition between the two structures.

The ground and first floor of the extension accommodate arrivals, second floor is departures, third is the international departure lounge with retail units, the fourth mezzanine level has restaurants and VIP lounges, and the uppermost level is a plant zone.

While the lowest three floors occupy the extension’s entire footprint, the upper floors are set-back and overlook the departures level.

Consequently, much of the departures zone is a triple-height 36m-wide column-free area. This is created by a series of 2.5m-deep trusses positioned at roof level. These large steel elements were brought to site in three pieces, assembled on the ground before being lifted into place as one 36m-long section.

The majority of the terminal extension steelwork was completed towards the end of 2018, but further steel construction is taking place at the front of the new building. The existing forecourt, which has an entrance on level 2, is being extended to include the extension and a new canopy, supported on CHS columns, is being erected.

The Terminal 2 extension is scheduled to open in April 2020. 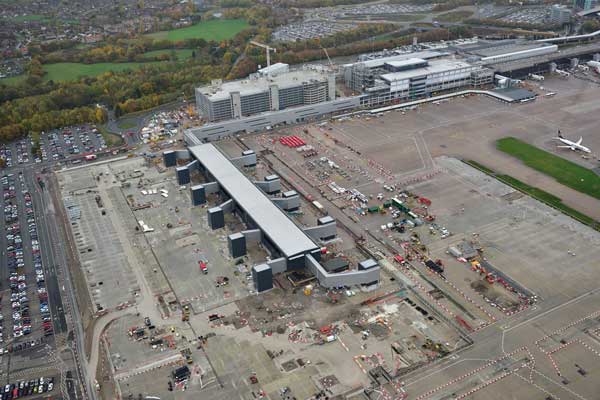 As well as the Terminal 2 extension, structural steelwork has also played a leading role in a number of other parts of the Manchester Airport Transformation Programme.

Of the project’s three planned piers, the first one (pictured above) and its connecting 250m-long link was handed over in January.

William Hare erected 1,650t of steel for the pier and link, completing the work just as the main terminal steel programme was kicking off.

The pier has 11 gates and measures 216m in length. It was erected around a standard 9m grid pattern and its roof is a portal frame creating a 20m clear span.

Connecting the terminal extension to the new multi-storey car park, is a recently installed 45m-long steel bridge. Weighing close to 100t, the structure was fully assembled offsite in order to minimise disruption. It was then transported to its final position using self-propelled modular transporters (SPMTs) and then lifted into place by one 750t-capacity mobile crane.