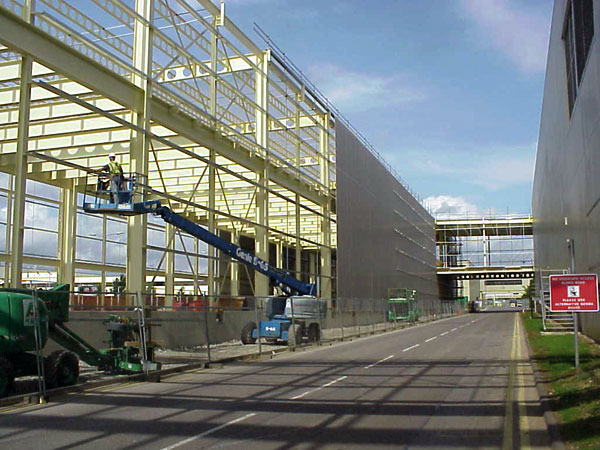 A major expansion project at Honda’s car manufacturing plant in Swindon has recently been completed by Caunton Engineering.

During a 10-week programme, Caunton supplied and erected approximately 1,000t of structural steelwork for an extension to the existing production facility, a new plastic operations building and two mezzanine links over the main thoroughfare.

Tony Goodman, Caunton Engineering Contracts Manager, said the company is no stranger to the location, having worked there regularly during the past four years.

“We have been able to give Honda the service and steel construction they require,” Mr Goodman added.

Caunton has extended the existing production facility by a single 18m-wide bay at the north end in one direction and four 15m wide bays at the south end in another direction.

“We also had to erect steelwork over an existing roof and this required some 27m-long 3m deep trusses,” Mr Goodman said. “All of this work was completed without disrupting their production operations,” he added

The new plastics operations building will produce items such as bumpers and measures 120m x 20m. It contains a mezzanine level at an 8.2m height. Mr Goodman said the structure is basically a stick and beam building with large 10m and 12m grids.

Because the links traverse a major delivery thoroughfare within the Plant, Caunton had to erect both structures over a number of weekends.