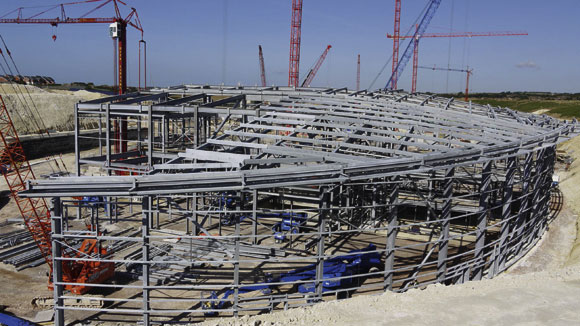 To help Sussex beaches meet European environmental standards a new wastewater treatment works is under construction in the midst of the South Downs. NSC reports on the role steelwork is playing on this major project.

A wastewater treatment works (WTW) is under construction at Peacehaven, West Sussex, to treat effluent generated each day by the residents of nearby Brighton and its environs and bring the region into line with European standards.At present, wastewater from the area receives basic treatment before being pumped out to sea through a 1.8km pipe. As a result, this is now the only area in Sussex, and among the last in Europe, that does not meet European environmental standards on wastewater treatment.

Part of Southern Water’s £300M environmental improvement scheme, the overall project includes 11km of tunnels to transfer wastewater to the WTW and then cleaned wastewater from the new works to a new 2.5km long sea outfall pipe off Friars Bay.

Situated at Lower Hoddern Farm in Peacehaven, the WTW is a necessary and integral element of the project. Gravity and two underground pumping stations will aid the delivery of the wastewater to the facility.

Above ground level the most visible aspect of the project is the large steel framed structure that houses the WTW. Approximately the size of three football pitches, the complete structure is covered by a parabolic roof that rises to a maximum height of 18m and dips down to a height of 14m. The shape of the roof is not just an architectural feature, as it will be covered with sedum and on completion to be one of the largest green roofs in Europe.

“The shape of the roof also fits into the surrounding South Downs,” explains Alan Faherty, Costain Project Engineer. “In this way the project will not stand out and will blend into the downland landscape.” 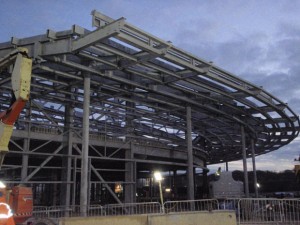 The PTB features a step-back elevation forming a covered roadway

The large steel structure is divided into two parts by a movement joint located along a steel covered canopy that connects the Sludge Recycling Centre (SRC) to the larger Pre-Treatment Building (PTB) part of the structure, an area which sits over the facility’s deep shafts.

The covered canopy spans part of the width of the structure and consequently it is 70m long × 10m wide and formed with 12m high columns and 914 beams. There are also two rows of internal columns supporting this substantial part of the structure, which shelters parts of the process areas as well as linking the two buildings.

The larger PTB section of the overall structure is approximately 150m long x 55m wide and consists primarily of an open-plan space for the treatment works. The exception being one elevation which houses a small single-storey office and welfare area.

To create the necessary open plan area Bourne Steel has erected a series of roof trusses which span up to 30m between two rows of internal columns. The trusses vary in depth to create the curving roof, along with large box section purlins which span between the trusses. Because of the roof’s unique shape, each purlin had to be individually set-out.

The trusses were brought to site in completed half sections. The two sections were then assembled into one truss on site, before each entire truss was erected by two crawler cranes.

The columns for the PTB are 12m-high CHS members and have been galvanized prior to erection. “The columns, and in fact all of the steelwork has had to be galvanized because of the marine environment, moisture content and the highly corrosive atmosphere which will be created within the facility,” says Rod Potts, Bourne Steel Project Manager.

On the other side of the canopy, the smaller SRC is approximately 75m × 120m and 20m high. This structure contains three mezzanine floors, mostly for plant equipment. Large columns support these levels as significant loads from the equipment will be exerted.

Again a large open area within the centre of this part of the structure has been formed with a series of 13 trusses. To take into account the SRC’s D-shape and the curvature in the roof, each truss has been individually fabricated. They are all approximately 30t in weight, but vary in depth and length, with the longest truss being 30m-long.

“Each part of the structure is different because of the various functions which will take place and the various plant equipment to be installed. Because of this, there has been little or no repetition in the steelwork,” says Chris Barnfather, Bourne Steel Project Designer.

An exception to this is the structure’s bracing system for stability which is the same in both parts of the building and is derived from cross bracing located in all  grid lines and elevations.

“The curvature of the roof makes the structure pull in one direction, so the bracing has to be very robust to resist the thrust from the roof,” explains Mr Barnfather.

Works started at Peacehaven during July 2009 with completion scheduled for autumn 2012. 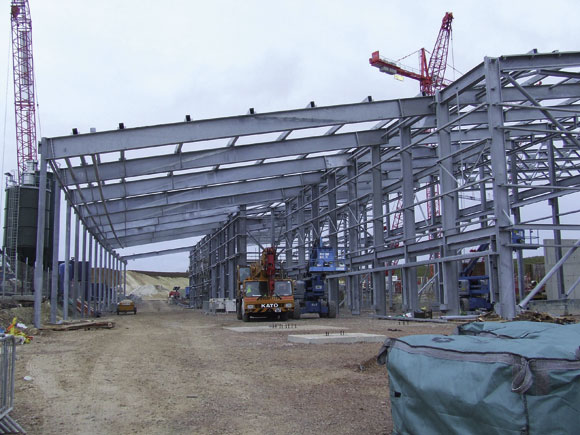