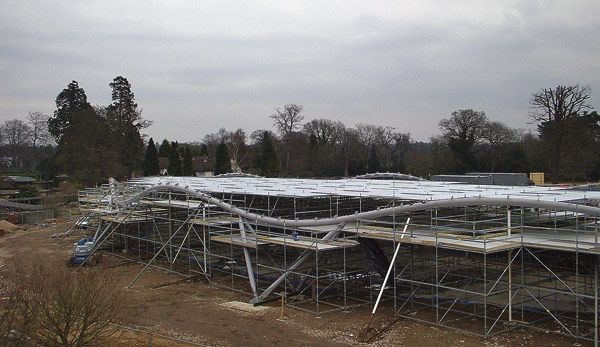 The complexity of a steel roof for the Savill Gardens visitor centre in Windsor Great Park belies its cost and the tonnage of material used. SH Structures’ £220,000 contract used only 50 tonnes of steel, but the completed structure will be far more dramatic than these figures might suggest.

The roof structure consists of a circular hollow section ring beam supported on trestle columns in pairs, pinned at both ends. The ring beam is curved both in plan and elevation. “Angle Ring supplied the sections bent in a single plane, which we built up in our works to create the 3D effect,” says SH Structures Estimating Manager Peter Redfern.

In addition a series of plates at close centres around the inside of the perimeter act as brackets for the timber roof. There is virtually no repetition in the plates, said Mr Redfern, because of the changing angle of the ring beam and the fact that the timber rafters come in at different angles too.

Construction of the ring beam is virtually complete, and the centre is due to be completed in March 2006.

The main contractor is William Verry, Buro Happold is the structural engineer and the architect is Glenn Howells Architects. Contract value is £5.5M.