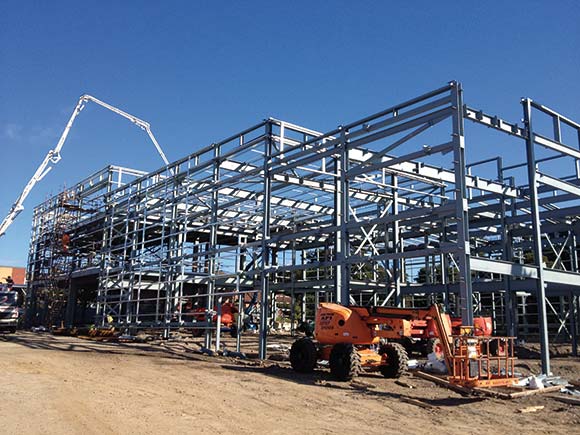 The Northumbrian town of Cramlington is getting a makeover with a revamped shopping centre and a new nine screen cinema.

A multi million pound scheme to transform the centre of Cramlington is relying on steel construction to deliver a new frontage to the existing Manor Walks Shopping Centre and a new nine screen Vue cinema complex.

The works are being carried out around a redeveloped and enlarged public car park. The new shopping centre frontage will accommodate an array of family orientated restaurants, outlets chosen to complement the adjacent cinema.

The centrepiece of the scheme is a new 1,800 seat nine screen Vue cinema and this is where the majority (400t) of the project’s structural steelwork has been used.

“Steel was the best option for the cinema’s frame because of the required spans, the height of the building and the site’s logistics,” says Paul Hards, Cundall Senior Associate. 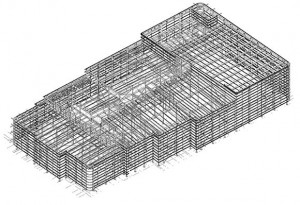 The shopping centre, its car park and local roads surround the site. As the majority of the mall is open during the works the car park is in constant use and the nearby roads are busy, so deliveries of materials have needed to be kept to an absolute minimum to avoid disruption.

Steelwork was delivered on a just in time basis, which usually meant one or two deliveries a day, and this also helped to avoid congestion on site. Using an alternative framing method would have resulted in more frequent deliveries and more traffic on the local roads.

The cinema is on the site of a former garage which was demolished by the main contractor Tolent early in 2012. Reminders of Cramlington’s once thriving coal mining industry were then discovered during site investigations. A number of old mine workings deep beneath the site had to be grouted prior to the installation of reinforced concrete pad and strip foundations.

Steelwork was erected onto these foundations using a combination of mobile cranes and mobile elevating work platforms (MEWPs).

“It’s a very complex steel design as there is no regular pattern,” says Andy Dagnall, EvadX Project Manager. “Each of the nine auditoriums is slightly different in shape and size, while the overall building has a number of steps along one elevation, meaning it gets narrower from north to south.”

The cinema has an overall footprint of 2,900m² and the auditoriums vary in size from Screen 1 which has a seating capacity of 404 down to the smallest, Screen 7 that has a capacity of 71. 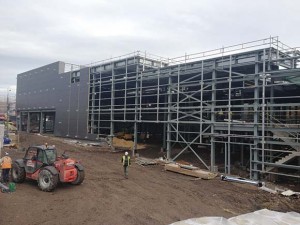 Consequently, there are a variety of spans that the steelwork design had to cope with. The longest span is in the cinema’s entrance area where a 21m-long × 1.8m deep fabricated beam supports a terraced seating area and a mezzanine level circulation space.

Brought to site in one piece, the beam weighs 22t and was the heaviest single element of the entire steel erection programme.

“A fabricated section was needed as it has the required capacity to limit the deflection which were set at 5mm along the 21m length,” explains Mr Hards. “This beam also supports a projection room which is why deflection was so important on this occasion.”

The internal layout of the cinema basically consists of the nine auditoriums which slope down to ground floor level and a mezzanine floor that accommodates the circulation areas.

The positioning as well as the size of the auditoriums contributes to the irregular grid pattern. Another factor are the four steps, where the building reduces in width by one structural bay, along the eastern elevation. 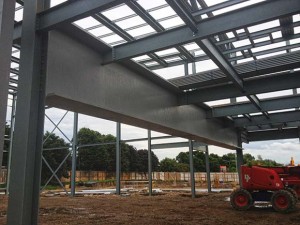 These four steps are mirrored at roof level, as the height of the structure also reduced in each location, with the lowest end furthest away from the shopping mall.

The exterior of the cinema complex is a composite aluminium cladding, with an additional architectural stainless steel mesh wrapped around the structure.

The mesh is supported on rows of tubular steel connected via brackets to the structural main frame. EvadX installed these brackets at the same time as the main steelwork.

The mesh and its supporting steel form a bullnose feature at the lowest part of the structure, creating an architectural signpost to the development. 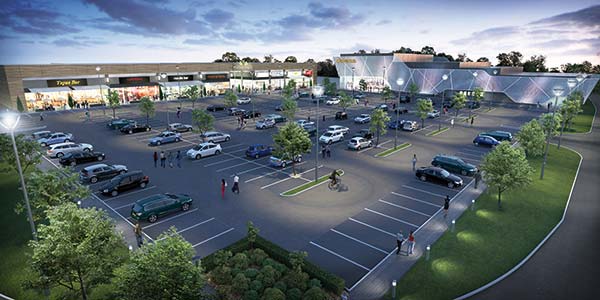 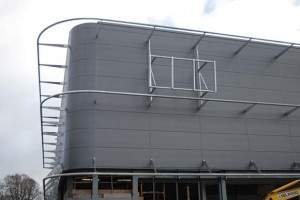 The bullnose feature creates a signpost to the development

“The new steelwork is bolted onto an existing steel frame,” says Andy Dagnall, EvadX Project Manager. “Most of the steel consists of light architectural sections and some will be left exposed in the completed job.”

Some areas of the existing steelwork have had to be strengthened with additional tubular cross bracing. This has enabled plant areas to be installed on the roof of the mall.