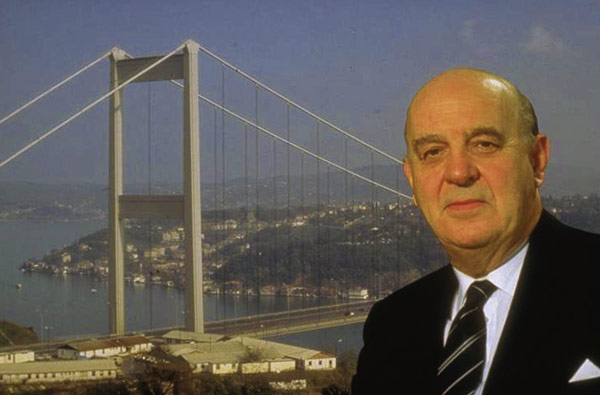 William Brown, one of the leading figures in long span bridge design, has died. Mr Brown, 76, was best known for his contribution in the pioneering team at Freeman Fox & Partners which developed aerodynamically advanced decks for suspension bridges first seen on the first Severn crossing and later on the Humber and Bosporus bridges.

Mr Brown played a significant role in many long span bridge designs, including the Forth Road Bridge, the Severn and Wye crossings, Auckland Harbour Bridge, The Erskine Bridge over the Clyde, and the two Bosporus bridges. For many years he had been promoting the concept of bridging the Messina Straits and was engaged on design work for it up until his death in London on 16 March.

Mr Brown graduated in engineering from University College, Southampton, and also studied at London University’s Imperial College which made him a fellow in 1987. He was a partner at the world famous long bridge design specialists Freeman Fox & Partners for 15 years from 1970.

As an independent consultant — Brown Beech & Associates — he worked for a large number of clients worldwide, including directly for the Turkish client for the second Bosporus bridge whose construction he oversaw. This role brought him  to the attention of the world press in a way few bridge designers ever achieve.

His early career was marred by the collapse of the Milford Haven box girder bridge during construction, which killed several workers. This was followed by another Freeman Fox box girder collapse at the River Yarra in Australia. Brown overcame these setbacks and became one of the world’s leading designers of bridges in steel.

He also developed the system for spinning cables used on the Storebaelt crossing in Denmark. His controlled tension spinning method was used to spin 20,000 tonnes of steel wire in only three months.  Brown’s awards included an OBE,and the first McRobert Award. He was Master of the Royal Society of Arts’ Royal Designers for Industry between 1983 and 1985, and was awarded the John A Roebling Medal for lifetime achievement in bridge engineering in  2004.