The construction and launching of steel composite bridges are an essential element of a citywide tram extension project. Martin Cooper reports.

The City of Nottingham is extending its NET tram network with the addition of two new lines to the southern and southwestern suburbs of Clifton and Chilwell.

With a combined length of 17.5km, the lines which are due to be operational in late 2014, will link directly into the existing network near Nottingham’s main railway station. The new tramlines will actually pass right over the Edwardian Grade II listed station on a new bridge, while the project as a whole will require a number of other bridges to span railways, roads and the River Trent.

Steel construction is playing an important role on the project, as five major bridges are all reliant on the material. The biggest and most iconic of these is known as the Karlsruhe Friendship Bridge, a 104m-long structure that will span the main station and Station Street.

The bridge is being assembled in two separate segments at a dedicated yard. Both of these segments require highly precise launching procedures, the first of which was completed in February (see box) to get the bridge into its first stage erected position. 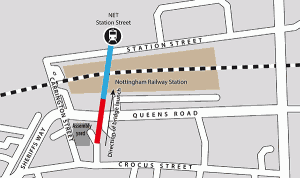 To ensure they can be transported by road, Cleveland Bridge is fabricating the trusses in half sections measuring 25m-long × 3.5m wide and weighing 30t. On site they are welded up (four for each half segment of the bridge) to form a section ready to be launched.

Connecting the two sides of the truss together is a series of large cross girders spaced at 2.6m intervals. These are a mixture of fabricated plate girders and rolled sections all of which have bolted connections.

Completing the steelwork is a 1m-high × 20mm thick steel shutter plate to support the edge of the deck, which is added to both sides of the bridge prior to the launch.

“Steel was the best option for the bridges, and construction in any other material would have made the structure much heavier to launch and would have needed more supports,” says Martin Carroll, Taylor Woodrow Alstom Project Director.

“A steel warren truss bridge also lends itself to the overall design of the station which is currently being renovated.”

Once the launches have been completed work will then begin on the 70m-long Queens Road Bridge. This structure will be connected to the southern end of the Karlsruhe Bridge to form a continuation of the city centre overpass.

“In the same yard we will be assembling the box girders into two 35m-long sections,” says Stephen Osbourne, Cleveland Bridge Operations Manager. “We will then lift them onto their supporting piers with a large mobile crane during a weekend night road closure.”

“We have a vast amount of experience of fabricating and erecting box girder bridges of this form having recently completed the M74 Glasgow project.”

Away from the city centre three other bridges are relying on steel construction. Work has recently been completed on Wilford Toll Bridge, an existing steel composite bridge that spans the River Trent. It was originally built as a railway bridge, but recently it has solely been used by pedestrians. In order to accommodate twin tramlines for the Clifton branch extension, the structure is being widened with the aid of additional plate girders braced to the side of the original steel deck.

After three weeks of preparatory strengthening works, Cleveland Bridge erected the steelwork over four midweek nights. A 500t capacity mobile crane positioned on the riverbank erected six pre-assembled 33m-long steel plate girders (three for each side of the bridge) which weighed up to 28t each.

“We undertook the lifts during nights to avoid disruption to local school routes across the bridge and not to obstruct river traffic,” says Mr Osbourne. 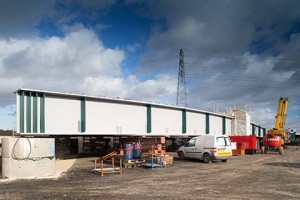 Carrying the new Chilwell extension over the mainline railway southwest of the city centre, the Lenton South Junction Bridge is also currently on site.

The 45m-long skewed bridge was assembled offline with its concrete deck. Last month it was jacked up and moved by self propelled mobile transporters (SPMTs) to its final position on abutments during a weekend rail possession.

The bridge is formed from two 30m-long and two 25m-long plate girders, welded together on site. A series of 12m long cross beams with bolted connections join the two halves together.

Site work for the fifth steel bridge on the project is due to start soon. The 61m-long Clifton Boulevard Bridge is a bowstring arch structure spanning the busy A52.

Once assembled the bridge will be positioned by SPMTs during an extended night time road closure. This is due to take place later this summer. 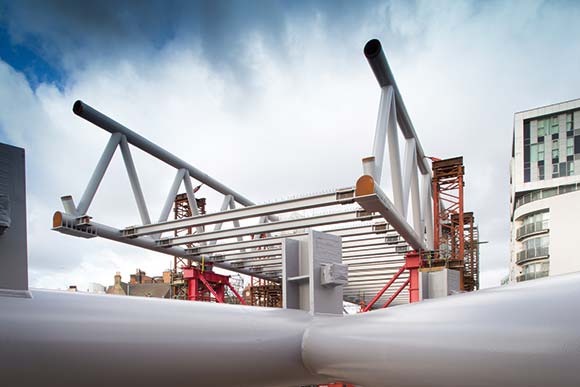 Work to start launching the first part of the iconic bridge that will carry trams over Nottingham Station began on Monday 11 February. A team of up to 30 people ensured the 410t steel structure was pushed from its compound 50m over Queens Road towards the railway station.

The precise engineering process involved slowly sliding the structure in 2.6m cycles, between 8pm and 6am on five consecutive nights, using a series of hydraulic ram jacks positioned on supporting temporary towers. The bridge was moved up to 13m every night.

During the launch the bridge was continually monitored from the end of the existing tramline using targets fixed to a specially designed temporary steel nose.

Now that the first half has been installed, there is room in the compound to assemble the second half of the bridge. Once complete the second half will be joined to the first and the entire 1,100t structure will then be positioned over the station, in a similar week long night time procedure, onto final permanent supports.

Explaining why this method of bridge positioning is being used, Martin Carroll, Taylor Woodrow Alsthom Project Director says: “Launching is very safe and causes minimal disruption, Queens Road was open to traffic during the first process and the station will also remain open during the second launch.”