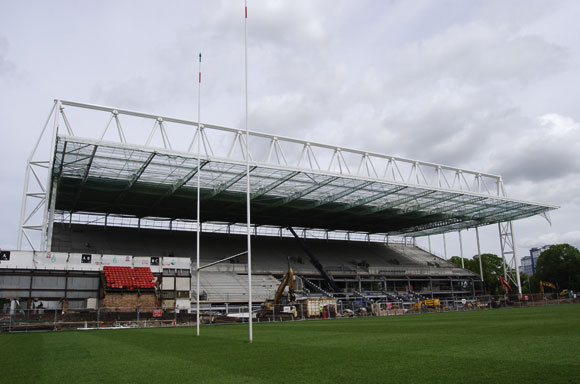 A new grandstand at Leicester Tigers’ ground is nearing completion after the majority of construction work was carried out during a busy rugby season. Martin Cooper reports on how the steel structure was erected without impacting on the use of the ground.

Rugby Union’s popularity has been steadily increasing over the last ten years or so, with England winning the 2003 World Cup and the creation of the fully professional Guinness Premiership both helping the sport win over more spectators and secure sponsorship and extra revenue.

No longer the domain of the amateur player, the top Rugby Union clubs are now attracting bigger and bigger crowds. So much so that London-based teams such as Wasps, London Irish and Saracens have all discarded their traditional grounds in favour of sharing a larger and more modern stadium with a local football team.

For Leicester Tigers, arguably the sport’s best supported team, moving home or sharing a ground was not an option. Instead the club has embarked on an ambitious 10-year programme to redevelop its Welford Road ground into a modern 30,000 seat stadium complete with a raft of facilities.

The first phase of the programme began last year and comprises of a new 10,500 seat north stand, which will increase the ground’s capacity from its current 17,498 to 24,000. Due to open for the forthcoming 2009/10 season, which kicks off in the autumn, the stand has been constructed while the ground has been in full use during the last season, and – this is the logistically challenging part – over and around the old existing north stand. 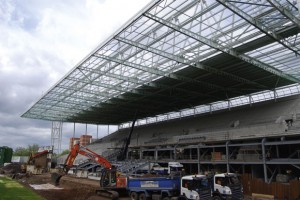 “The Club has been very successful in recent years,” says Charles Rayner, Head of Stadium Operations. “We needed to improve our facilities to mirror the team’s performance. But we also needed to retain operation of all four sides of the ground during the last season.”

To achieve this the steelwork for the new stand has been erected above the old wooden north stand. From August to last April construction work was carried out during the week and most weekends, prior to a Leicester Tigers home fixture, all aspects of the construction site were health and safety checked and made ready to allow fans access to the old stand.

During the season the new stand’s roof, including a mighty 108m long king truss, as well as the upper portion of the stand were erected around the existing stand. Then, during April the old stand was finally demolished clearing the ground for the lower level of the new stand to be infilled.

“Our final two matches were played at the nearby Walkers Stadium,” comments Mr Rayner. “But having played the majority of the season at home this was a minor disruption as it allowed the construction programme to continue on time, and means the stand will be ready for next season.”

“We erected most of the steelwork behind the existing stand, but we had to leave four bays at either end uncompleted so we could have space for our large mobile cranes,” explains Allan Younger, Divisional Director for Caunton. 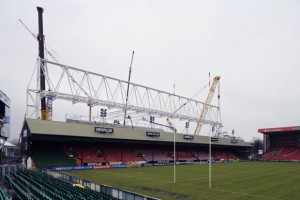 The roof’s truss was lifted into place in a dual lift by two 1,000t capacity cranes

Caunton began this mammoth lifting operation at 7.30am when the lifting shackle was bolted to the truss. The entire erection process of the truss was then completed by 10.45pm that evening. The truss weighed 230t and consisted of all associated purlins and a series of 6m-long Westok beams which were connected to the bottom of the truss.

The new stand features a number of amentities and below the seating area it has four internal levels. Ground floor comprises the main concourse and entrance area as well as a 700 people capacity matchday bar. Above this on the first floor there is a 1,000-seat function suite, a second floor concourse area and a third floor plant area.

As Mr Rayner points out, having facilities like the function suite will allow the stadium to increase the club’s revenue by attracting events on non-matchdays. “It’s fine having a big stand or stadium, but as many club’s have found out to their cost, many are under used between games. We’re confident we can fill the stadium for matches and host corporate events in between.”

The new North Stand is 24m-high compared to the 8.5m-high stand which was originally built in the early 1920s. Even though the project is not yet complete, the stand is one of the first structures one sees when entering Leicester by train from the south.

“It’s a landmark structure for the area,” says Dave Robinson of Frank Whittle Partnership. “We wanted the largest stand possible for the footprint and by constructing it the way we have we’ve also maximised the ground’s capacity during the season.”