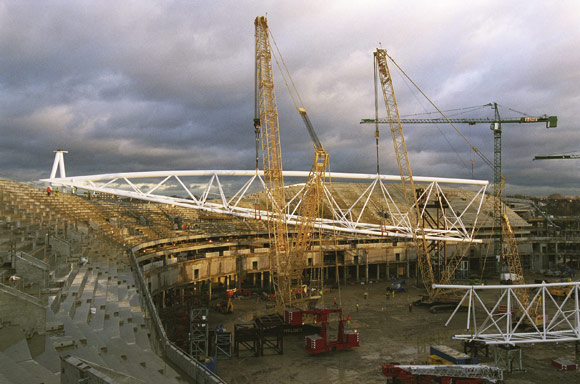 Each section of a primary truss weighs 350 tonnes

Arsenal FC’s new home ground is ahead of schedule and looks like being a jewel among stadiums. David Fowler reports on the game plan from pitchside.

Self-effacement is not a quality normally associated with a stadium – nor with professional football in general. But for Arsenal’s new home ground it was essential. The Emirates stadium is only 0.5km from Highbury, the club’s revered home of 92 years, in an area of dense Victorian housing, and gaining planning approval was not a straightforward task.

“It’s quite unlike Wembley: it’s all about being discreet – for a 60,000-seat stadium,” says architect Christopher Lee of HOK Sports Architecture. The Emirates stadium’s 46m height would fit three times under the new Wembley arch.

Even a 46m high structure is going to be noticeable. It’s likely, though, that Emirates will come to be thought of as a jewel among stadiums, very much in the tradition of Highbury, whose Art Deco east and west stands are listed structures.

Finding a site in the inner city so close to the club’s existing home is a minor miracle in itself but it presented a number of construction challenges. The triangular plot is bounded on one side by the East Coast Main Line railway and on the other by the Network Rail line from Moorgate. The PIccadilly and Victoria tube lines run under the railways and a main Thames Water sewer crosses the site from east to west. 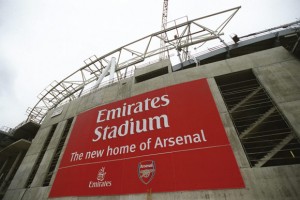 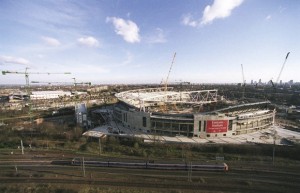 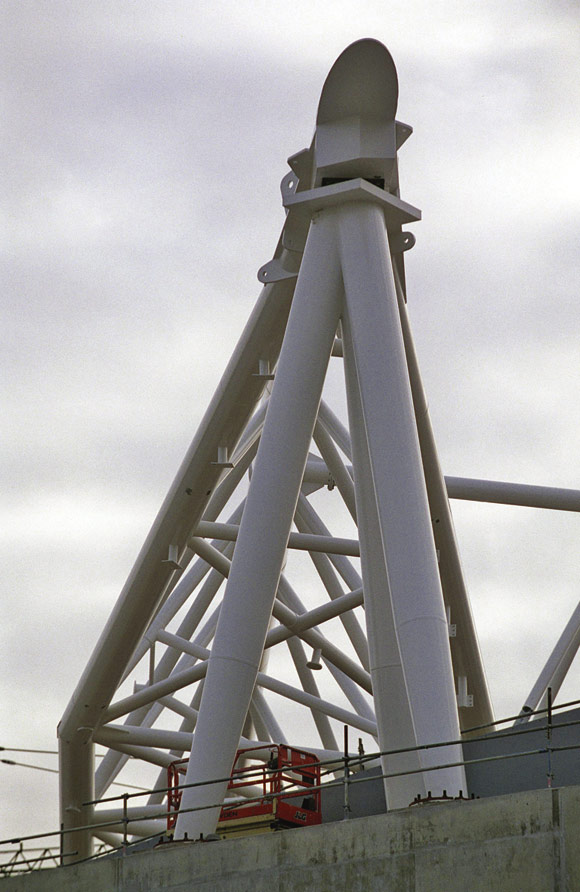 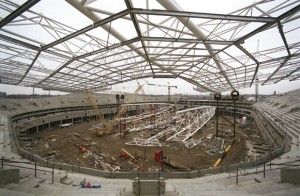 The roof slopes down towards the pitch to maximise light

The site was most recently used for light industry. Watson Steel Structures is currently welding together the second halves of two primary roof trusses on what will next year be the pitch but last year was a working waste recycling station attracting 200 lorries daily. This waste transfer station continued, fully operational, from the start of construction last February until a new centre, built as part of the project, was ready in August.

Nonetheless, just over a year into the contract and with around 15 months to go, progress is impressive. The north stand superstructure (which is steel for the top tier and reinforced concrete at lower levels) and the north half of the steel roof are well on the way to completion, though at the other end things are less advanced, because of the lack of access. And two steel bridges to carry pedestrians from the nearby stations across the rail lines to the stadium, the bigger one weighing 380t and measuring 22m wide, were lifted into place last autumn.

Construction of the roof is ahead of schedule. Sir Robert McAlpine Project Director Rolv Kristiansen, a veteran of high-profile projects such as the Millennium Dome, says: “We set ourselves a tough programme for 2004 deliberately, and lifted the roof trusses in December, rather than January as planned.”

The roof slopes down towards the pitch so that the 15.5m deep truss at the front will be more or less hidden from the outside. The view will be uninterrupted by columns, and a great deal of  work has gone into optimising sightlines from all seats. Because of the slope of the roof, rainwater has to be pumped back up the slope from the front.

The primary trusses are being erected in two halves, each 102m long and weighing 350t, with the first halves already in place, spanning between a tripod and a temporary trestle at mid-span. Each 100m secondary truss weighs 100t, while the longest tertiaries are 52m and 37t. The top boom of each primary is formed from 1.2m diameter cold formed circular hollow section.

Buro Happold Project Leader Geoff Werran says: “We worked closely with Watson Steel to make sure temporary stability was OK at every stage.” Use of circular hollow sections makes individual members inherently resistant to lateral buckling. All the trusses are three-dimensional with a triangular cross-section, which gives them built-in stability against lateral-torsional buckling.

“When built, the roof members stabilise each other,” Werran continues. “The secondaries stabilise the primaries, and even the tertiaries contribute to stability.”

Werran adds that “huge investment” in producing a 3D X-Steel fabrication model of the entire structure has paid off: “Producing the model can be quite a painful process – you can’t do it in a piecemeal way, you have to have everything detailed for it to work, but it paid off in fit-up.”

Watson Steel Structures director Peter Miller says: “We do a 3D X-Steel model for every project now. All the cutting, drilling and burning is done electronically. But on this particular job it would have been very difficult if not impossible to resolve the geometry in any other way.”

This is partly because the roof structure is curved in two directions, but also because of progressive deflection as it is built.

“As we build the roof it changes shape. We have to predict the change of shape as we build it so each element will fit.” This consequently means that the model has to be set up knowing the sequence of construction. “We spent a long time working with the architect and engineer to get information up-front before starting the manufacturing process.”

Mr Miller says this will pay dividends again later because all the necessary brackets for loudspeakers and ancillary components are already detailed and fitted, avoiding possible delays and the additional cost of having to go back and retrofit brackets 40m above ground after the structure has been erected.

Mr Miller adds that collaboration was facilitated by a two-stage tender process by which Sir Robert McAlpine was appointed but did not have to confirm a final price until the design was almost complete. The same applied to subcontractors.

“We were involved in discussions on design, manufacture and programme for two years. By the time we had to submit a final price we’d already solved most of the problems,” he says. The contract was then signed as a fixed lump sum.

To illustrate the benefit Mr Miller cites the main trusses. “Working with McAlpine we identified 16 possible erection methods. We weren’t sure which was the optimum. We developed a programme and cost details and a list of pros and cons for each, then agreed which would be best for the project as a whole.

“The one chosen was one of the most expensive from the steelwork aspect but saved many months on the overall programme. We wouldn’t have offered that on a normal lump sum tender because we may not have won the job.”

Highbury is renowned for having the best pitch in the Premiership and much thought has gone into emulating this in the new stadium, with comparative studies being undertaken between the existing and new pitch microclimates. The low overall roof height, allowing plenty of light through, will be the biggest contributor to the pitch quality. The expert view is that the natural microclimate of the new pitch will not quite match that of the old, because the existing stadium has open corners, but that it will be as close as possible.

Meanwhile work continues towards the target of opening in time for the start of the 2006 season. Even after the structure is finished, commissioning the complex IT and ticketing systems and training Arsenal staff in using them will be considerable tasks.

So the collaborative spirit on the project, and the fact that Mr Miller expects the second half of the main trusses will be ready to lift by Easter, with a probable mid-April lift date, can only be good news. He says: “We set out to try and beat the target on the north end and put ourselves in the position that if the civils work was ahead we could take advantage of it. We’re hoping to do the same with the south end.”