Theatre offers an outside view 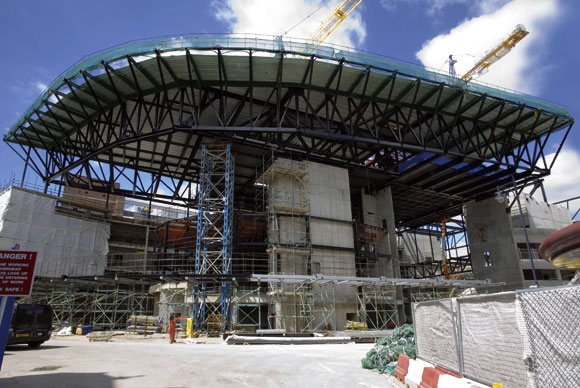 A sweeping glass clad facade will hang from the roof

One of the most innovatively designed theatres ever built in the UK, incorporating high levels of architectural transparency, is being built in Leicester. Martin Cooper reports.

Once complete the Leicester Performing Arts Centre (PAC) will form one of the main elements of a new Cultural Quarter rapidly taking shape in the St George’s district. Leicester City Council is currently in the process of relocating most of its key arts, media and broadcasting services into the area, which was once home to a thriving textile industry.

The Leicester Theatre Trust says its vision for the PAC is to create a theatre ‘turned inside out’ offering itself as a total resource for professional artists and community members to take and share in the complex.

Put simply, this means the inner workings of the theatre, its craft and technical components, will be exposed to the street and allow passers-by to view such things as rehearsals, scenery construction and costume making.

It is intended to be as open as possible to the public gaze, and once complete, the idea is that people in the street or foyer can see the whole production process as well as the final performance.

Inside the four level 13,000m² building there will be a main foyer and two auditoriums. The main 750-seat theatre and the smaller 350-seat venue, are conceived as islands containing balconies arranged in an intimate manner that helps control acoustics. There is no distinction between front and back of the house because the central stage is part of the lobby and circulation area. 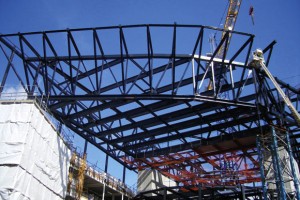 Trusses were lifted into position in 25m-long sections 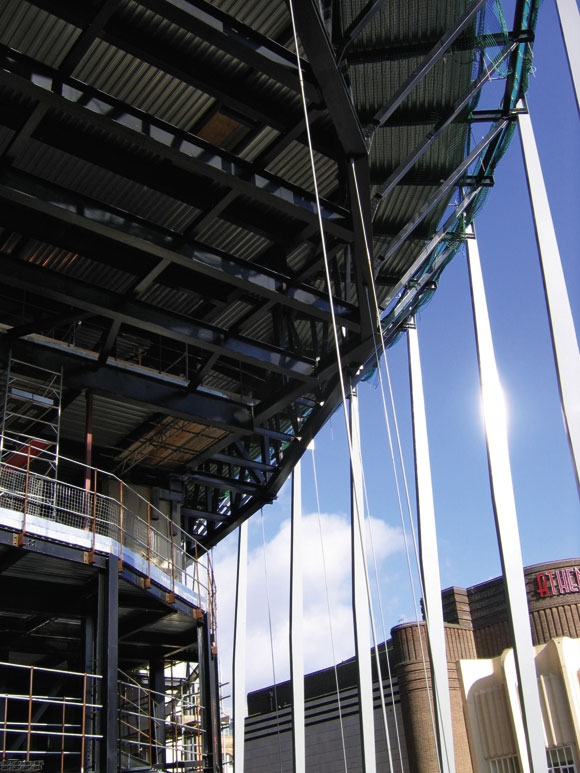 The client’s strong vision has been one of the main driving forces behind its unique and innovative architecture and structural design.

Architect for the job is US-based Rafael Viñoly – his first project in the UK – and he says by dissolving distinction between production and performance, the building extends this art form into the public realm, making it more accessible.

Rafael Viñoly Architects consequently designed the Performing Arts Centre to include a fully-glazed transparent facade, which allows the two auditoria and the stage to be revealed to the street outside.

Jim Dunn, Project Director for Adams Kara Taylor, says the scheme has not just been driven by the need for openness.

He adds: “The challenges for the job weren’t just associated with getting the architectural vision correct, we also had to deal with a very tight and confined site, which ultimately dictated the shape of the building.”

One side of the theatre abuts a multi-storey car park and consequently didn’t need to be glazed, but the other three facades, especially the curvature of Rutland Street at the front elevation, lent themselves to the impressive sweeping glass frontage of the complex.

“The large curved facade is also central to making the theatre transparent,” adds Mr Dunn. At ground level there is no structure, just 5m high sheets of glass joined together to create a seamless transparent wall. Above the glass wall is a 130m-long mezzanine walkway suspended from facade columns, which will enable people to circulate at first-floor level.

Bovis Lend Lease started work on site in June 2005 and once the inner concrete structure, basement and cores were complete, steelwork erection was able to begin in early 2006.

Steelwork contractor, William Hare has erected more than 3,000t of steel for the roof structure, with the remainder of its final 5,200 tonnage being accounted for by two steel-framed shoulder blocks which will house administration offices, workshops and changing rooms.

The glazed facade, walkway and its concrete deck, are also suspended from the huge steel roof via 18m-long tapered columns, spaced at 6m intervals. The walkway, which links both of the shoulder blocks, also has supporting Macalloy tie rods supporting the back.

Meanwhile, supporting such a vast steel roof and associated members was always going to be a structural challenge. The building’s four main concrete cores support the roof via huge sliding bearings, which cater for thermal movement and allow the roof structure to move laterally and independently of the concrete cores.

“The cores are four table legs and the roof is like a giant tablecloth,” is how Martyn Woodhouse, Bovis Lend Lease Project Manager describes the innovative roof structure.

Actually erecting the roof and delivering steel into the confined site via some narrow roads was also a logistical feat.

Mr Woodhouse says the truss sections were brought to site in 25m-long sections and then welded on site. “Anything bigger wouldn’t have been deliverable,” he says. As most of the truss sections didn’t exceed 30t in weight, one 500t mobile crane and two tower cranes lifted all the roof steel members into place.

“Cost was also an important issue,” stresses Mr Dunn. “So in conjunction with Bovis and Hare we decided on erecting and assembling all the trusses using just one single trestle.”

By using just one trestle there was limited propping required and so steel erection costs were kept to a minimum.

Once the roof was erected work began on the facade’s columns and this was also a tricky and time-consuming job as all members had to be precisely positioned so glass panels could be fixed between them.

“We were working to some exact tolerances for the glass panels,” says Mr Woodhouse. Working out the degree of deflection on the main structure caused by the weight of the facade and the concrete mezzanine walkway was complicated.

When the Centre opens in 2008 it will replace the existing Haymarket Theatre as well as providing a home for the locally renowned Phoenix Arts Centre’s live programme.

Culturally-led regeneration programmes have been successful in cities such as Bilbao and Gateshead, and both the city council and the Leicester Regeneration Company see the Performing Arts Centre and the surrounding Cultural Quarter as key to the city’s renaissance. 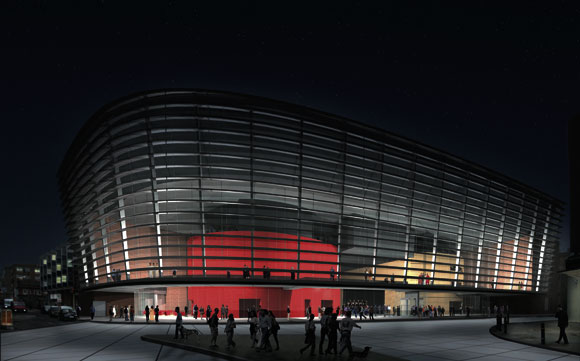