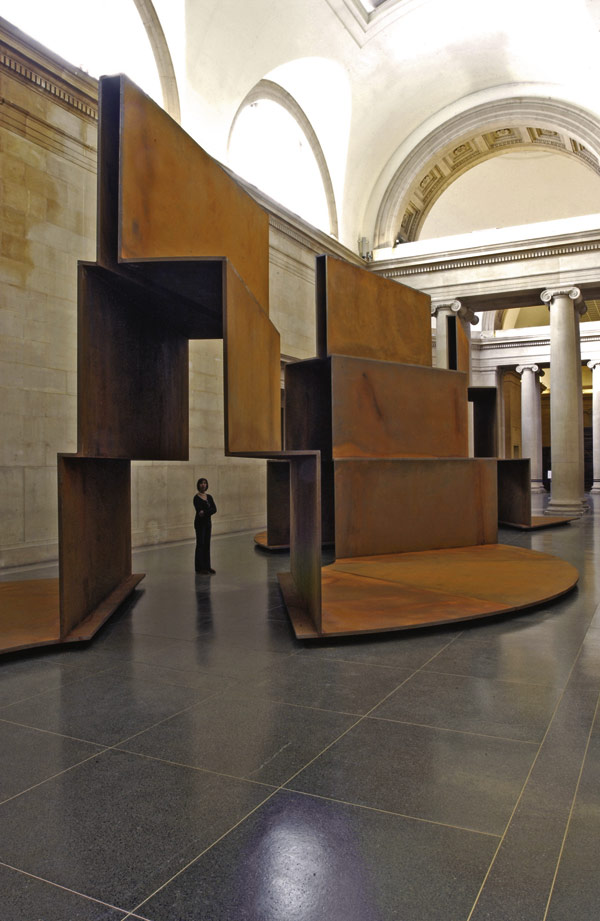 Constructing a 100-tonne steel structure to form the centrepiece of a new exhibition by Sir Anthony Caro at the Tate Modern presented several unusual challenges for steelwork contractor William Hare.

‘Millbank Steps’, built from 40mm thick weathering steel plate, was made specially for a retrospective covering 50 years of the sculptor’s work.

“One of the main problems was how to get it into the gallery,” said Richard Branford, William Hare Project Manager. “We had to size the components to go through doors and around corners, so it was fabricated in L-shaped components.”

Welding was not allowed in the gallery, so the 35 pieces had to be bolted together. Because the sculptor wanted clean joints rather than visible bolts, the joints are made with 1500 countersunk bolts in drilled and tapped holes rather than the usual clearance holes. The components were sent to a machining shop to be drilled and tapped to the required accuracy.

The floor is too weak to carry the sculpture directly, so it rests on a transfer structure designed by structural engineer Campbell Reith Hill to direct its weight into load-bearing walls beneath. In addition some props have been used, making it necessary to close of part of the gallery’s basement café for the duration of the exhibition.

There were no engineering drawings: William Hare worked from a set of drawings used to produce a plastic scale model provided by the sculptor from which it produced a walk-through X-Steel model for approval.

Due to height restrictions in the gallery and to ensure temporary stability of the sculpture, purpose-made equipment was designed. This included a gantry crane running on rails with movement of the frame being achieved by Tirfor winches, and a temporary support frame that allowed fine adjustments in level and plumb.

The programme for erection was three weeks. “We beat the programme by three or four days,” said Mr Branford.