Steel projects come to the fore at Tekla Awards 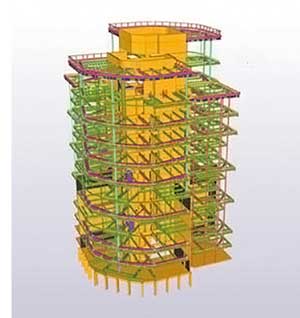 Trimble has announced the winners of the UK Tekla Awards 2016, which will now be entered into the Tekla Global BIM Awards.

The awards focus on projects of all shapes and sizes, which have used Trimble’s Tekla software as part of the process for designing and modelling structures, or where the use of Tekla software has aided collaboration.

Severfield won the Commercial Projects Award for the South Bank Tower development in London (pictured), while William Hare won the Sports and Recreation Projects category for its work on the Olympic Stadium roof. A Public Vote category was also won by Severfield for the Ordsall Chord bridgeworks.

Trimble Solutions (UK) Managing Director Richard Fletcher said: “It’s no surprise that once again our competition has yielded some brilliant projects. In fact, the entries that were submitted to this year’s awards were so strong that determining the winners of the seven categories was a tough decision to make.

“The awards are an ideal way for our customers to raise their company profile and attract potential new clients, as well as impress existing clients. They showcase and reward the hard work and innovation that goes into using software to solve engineering challenges, working collaboratively and delivering better outcomes for all involved.”