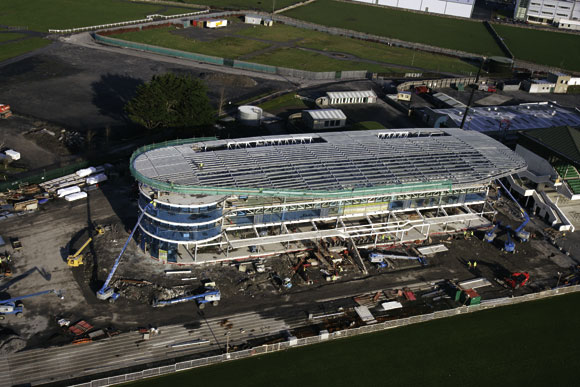 The stand will be topped with a 31m wide steel roof

One of Ireland’s best known and most popular sporting venues will open its new steel framed grandstand for July’s Summer festival of racing. Martin Cooper reports from Galway Racecourse.

Galway Racecourse plays host to one of Ireland’s most popular and historic race meetings every Summer. The three-day festival event is attended by thousands and this year punters will be able to enjoy the races from a new state-of-the-art grandstand.

Horse racing in County Galway has a long tradition and can trace its history back to the 13th Century, when organised meetings known as horse matches were regularly held.

Racing meetings at Ballybrit – the location of Galway Racecourse – were first run in 1869. and since then the annual event as blossomed into one of Ireland’s most popular sporting events.

With attendances increasing year-on-year, the Course’s old west stand was deemed to be too small and a new replacement grandstand was viewed as the only way to keep pace with demand.

Work on site began at the end of last year’s Summer festival in August, and commenced with the demolition of the existing stand. An eleven month window was effectively in place as the new stand had to be ready for 2007’s festival, which begins in July.

“This tight timetable was one of the biggest challenges associated with the job,” says Alan Poulton, Project Partner of Campbell Reith. “Moving this year’s race meeting to another course wasn’t an option, so everything had to be finished quickly,” he adds

Including ground level, the new steel framed grandstand will be a four-storey structure, with pre-cast concrete terracing, topped with 14m cantilever roof. 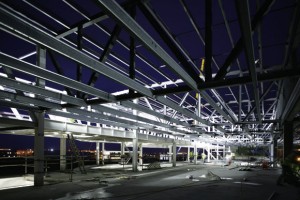 Steel erection was primarily based on a 7m grid plan, being replaced by a 14m grid plan on the front rows of the two upper levels 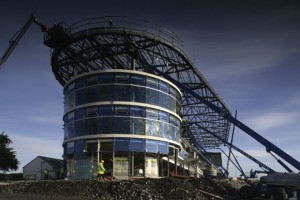 The roof features a 14m cantilever

Ian Kerr, Ballykine’s Managing Director, says steel erection began in the Autumn, once the groundworks had been completed, and was predominantly finished during a 12 week programme. This included intumescent paint which was applied in the workshop and approximately 4,000m² of metal decking.

“A lot of pre-planning was necessary because of the tight schedule,” explains Mr Kerr. “We had to liaise closely with other trades working on the project. For instance, as the majority of the steelwork had intumescent paint, elements such as glazing support brackets had to be welded in place in the workshop as site welding would not be possible. This also helped the follow-on trades and saved time on site,” he explains.

As all of the construction work had to be scheduled around Galway Races’ events calendar, the job was carried out during the inclement Winter months. This caused a few problems as the area experienced some severe gales at the back end of 2006 and the site was actually closed on a number of occasions.

The grandstand has a total of 67 trusses, most of them different sizes and consequently very labour intensive to produce. This, combined with the five-hour drive for steel deliveries, from Ballykine’s County Down facility in Ballynahinch to Galway, is the reason Mr Kerr is understandably proud of the way his company performed.  “Logistically, the job was quite difficult,” he says.

Column and beam steelwork for the first, second and third levels was erected in predominantly 7m x 7m bays, being replaced with double space 14m x 14m bays at the front of the grandstand on the upper two storeys. This design was to ensure better viewing from the upper floors by erecting fewer columns.

“To support these floors we had to install ten large trusses on two levels,” explains Mr Kerr.

These 1.6m deep floor trusses were erected parallel to the Course – length wise – and had to match the profile of the glass elevation.

However, all parties involved with the project say the roof was the most challenging aspect of the job.

“Simply describing the shape of the roof is quite difficult,” says Mr Poulton. “If you started with a rectangle, added a circle at either end and then cut the tops off the circles you’d get an idea of where the roof’s shape started out at,” he adds.

But it is the curvatures of the roof which made the construction time-consuming. The structure curves longitudinally, while there is also a traverse curvature. “This means there are only four standard grids for the whole roof and those are in the middle,” explains Mr Poulton.

“Geometrically the roof also differs front and back,” adds Mr Poulton. “As there is 14m cantilever at the front and only a 3m overhang at the back.”

More than fifty 3m deep trusses were erected at roof level. The steel sections vary in length and were lifted into position as complete pieces. The trusses are taper in two directions and ultimately give the roof its unique shape and curvature.

Commenting on the new scheme, Horse Racing Ireland’s Chief Executive Brian Kavanagh, says “Galway is undoubtedly the jewel in the crown of Irish racing, and the new grandstand development will further enhance facilities for the racing public.”