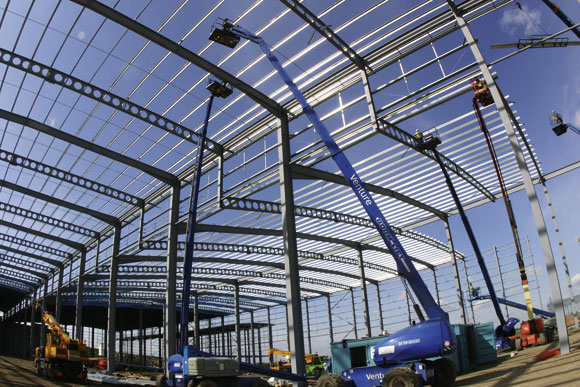 Because of the tight deadlines a phased construction method was employed

Speed of construction was paramount for a new distribution centre which forms one of the first major regeneration projects of the Thames Gateway. The unusual wave design of the roof and the tight programme meant that steel was the only option to construct the 62,200m² building on schedule.

The new distribution centre, pre let to Sainsburys, forms part of a mixed use development known as ‘The Bridge’ – a joint project by Prologis Development and Dartford Borough Council. The job will transform a 264 acre brown-field site, next to the QEII Bridge over the River Thames, into a dynamic new community. Once complete it will provide 7,500 new jobs and 1,500 new homes and will include construction of a primary school, a hotel and a variety of leisure facilities.

Main contractor Fitzpatrick, selected Conder to design, supply and erect the 3,320t of hot and cold rolled steel for the distribution centre which is over 320m long. A further 395t of galvanised steel was supplied by Conder to construct a 450 space multi storey car park adjacent to the warehouse. 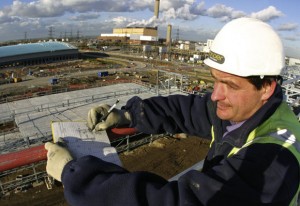 The job is one of the first Thames Gateway regeneration projects

“Conder was chosen due to its capabilities with the programme and it had a number of good design ideas for the project,” said Project Manager for Fitzpatrick David Stone. “The schedule was tight because of a partial possession deadline set by the client. The building was split into five sections of steelwork for phased construction and hand overs to allow cladding to start.”

The building’s design contained an unusual ‘curved and step’ roof shape to reflect its riverside location, this demanded an innovative steelwork design from Conder. Traditional portal frame could not be used at the steps in the roof as there are no internal columns to support the rafters. Conder’s finished structural frame design combines ‘hit and miss’ frames to reduce the number of columns within the structure and simply supported rafters at the vertical steps in the roof.

The ‘miss’ frame is formed with 18m curved cell beams, joined together to make the 35m spans. This works in conjunction with the adjacent and more traditional ‘hit’ frame which contains plain section, cranked rafters to form the roof curve.

The wave roof design consists of three large curves; two with spans of 68m propped in the middle with columns and one with a 40m clear span. These are joined by 5m deep vertical steps constructed with large steel sections hung from a high level edge beam.

Conder’s Design Manager Gerrard Cox says: “Our solution for the deep vertical steps within the roof was to design the rafters as simply supported beams using cellular beams to achieve the deflection limits.”

“Timing was crucial for this project and deliveries all had to be planned in advance,” says Mr Cox. “Individual sections can weigh up to 7.5t each and only two can be transported at a time so the first few days of construction were spent delivering the steelwork to site.”

All of the structural steelwork was erected in 13 weeks and construction of the distribution centre is set to be completed in April 2007.