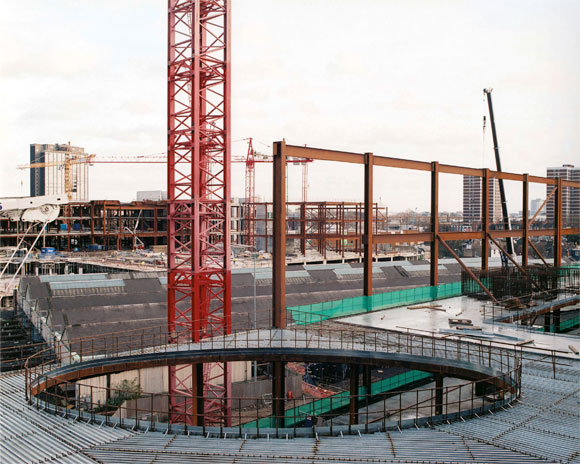 Greater London’s largest shopping centre will open in October 2008. Martin Cooper reports on the structural challenges and the significant role steel has played in this huge project.

Owner, developer and contractor Westfield Shoppingtowns estimates that 60% of visitors to the Westfield London will arrive by public transport. To serve this anticipated need a new tube station on the Hammersmith & City line, together with a re-modelled Shepherd’s Bush (Central line) station, a new station on the West London line which will become part of the TfL North London Railway; a new bus station to the north and a new transport interchange will be connected to the complex. Meanwhile, provision will also be made for the proposed West London Tram scheme.

John Roberts, Westfield’s Project Director, says the land was used by London Underground and consequently provision for its rail lines and sidings has had to be taken into account.

The westbound track of the Central Line runs diagonally under part of the site and was originally in a railway cutting alongside Wood Lane. This has been covered with concrete beams allowing open public access to the western elevation. Also under the western zone, new underground sidings in a concrete box have been constructed to replace existing rail sheds which lay across the centre of the project’s footprint.

The work involving the new underground sidings whilst maintaining LUL existing operational requirements has meant that there are parts of the project where construction sequence is in advance of the central areas directly above the old sidings. “The central section programme requires flexibility and speed,” explains Mr. Roberts. 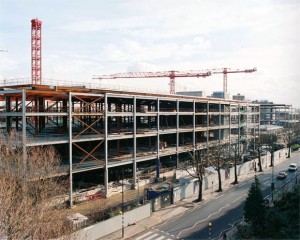 In summary, the project consists of three lower levels of car parking, on top of which there will be two levels of retail with the top floor containing a mezzanine level surrounding the Pavilion. Above the Pavilion, at roof level, there is the cinema complex and on the eastern facade, a leisure zone which contains a swimming pool.

The car park areas have been constructed predominantly using concrete, whilst the central section will be concrete encased steel, with everything above the car park now essentially steel framed. “With the majority of steelwork being erected in eight metre grids, this has meant a rapid installation of upper levels,” says Mr Roberts. “And this will help maintain the construction programme for the central area.”

Westfield’s involvement in the project began in November 2004 when the company took over from Chelsfield as developer and by August 2006 Westfield had assumed the task of construction from Multiplex. In that time Westfield has instigated a number of significant design changes to the project.

One of these changes has been to the Pavilion’s and cinema complex’s location. The Pavilion is an important and signature feature of the project and has been relocated eastwards from its original central position in order to optimize the con-struction that could be carried out adjacent to the Central Line underground. This is the line which runs beneath the project. The Pavilion now sits east of the west bound Central Line underground line.

Robert Bird & Partners, structural engineers for the project, explained: “This has resulted in loading from the structures alongside the Pavilion moving to areas not originally designed for them. This change along with the design development connected to the cinema complex required innovative engineering solutions to avoid overloading the transfer structure over the Central Line.”

“Some areas within the project which were originally to be built using concrete are now steel, such as the lower retail level,” comments Alvin Askew, Contracts Director of Severfield-Reeve. “Although there have been substantial changes to the scheme, the additional steelwork was chosen for speed of erection and to quicken the build-up,” he explains. 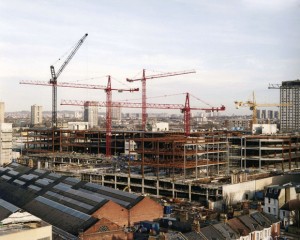 Some large sections of steel have been erected by Severfield-Reeve as the project required trusses up to 17t in weight. Mr. Askew says: “Three large steel trusses and a number of smaller trusses will be erected at roof level to link the cinemas. The three biggest, weighing 27t, and measuring over 24m long will be brought to site in sections and once assembled lifted as complete sections by one of the on-site high capacity tower cranes”.

Another major alteration to the project has occurred at the south east corner. Originally designed as mixed use residential and office accommodation, it was incorporated as an element of the retail centre and later adapted by Westfield as a “Black Label” area. With an area of the original site reconfigured to accommodate the residential portion of the scheme. The “Black Label” section is an integral element of the overall scheme and in order to attract different stores, such as designer and boutique brands, “Some major structural alterations are required to accommodate the wider and curvilinear malls,” says Mr. Roberts.

As the majority of the steelwork has already been erected in this area, retro-work and structural modifications has involved a number of steel columns being re-moved to give a larger 16m x 8m grid plan. The fact that steel was chosen for these areas has been a bonus to Westfield and its subsequent project alterations.

“If the retail areas had of been built with concrete the consequences of change would have been far more reaching,” says Mr. Roberts. “Steel was chosen to give Westfield greater flexibility and programme advantage to incorporate such changes to the designed structure”.

This redesigned sector of the project abuts the Shepherds Bush Central Line underground station and new bus terminus. This area will also feature a steel shard which will over hang the adjacent road via three pillars. “The shard will be visible from the station to pedestrians,” says Mr. Roberts. “It will guide them into Westfield London.”

Along the eastern side of the project the service dock has also been reconfigured to create a more efficient loading bay layout. In order to allow the open spans for trucks and to support the loading from above, a 24m long transfer beam has been installed.

It is the Pavilion which Westfield envisages as becoming the focal point within the complex. This large 6,000m², virtually column-free, area will also be able to hold exhibitions and concerts. Mr. Ward describes it as ‘architecturally extraordinary’ and the design for its signature roof  went through much iteration before the current scheme was adopted. A steel and glass roof structure supported by seven large tree columns letting in natural light and also strong enough to hang exhibits from was required.

The final design is a 150m x 50m lattice frame multi-curved roof supported by these seven steel tree columns. Because of the necessity to keep the area free of too many supports, the roof is a grid shell and acts three-dimensionally by spreading its loads down to the supporting columns and the surrounding retail levels. 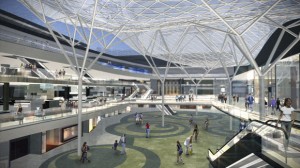 The need to brace the roof structure against lateral loads while respecting the need for maximum flexibility and open space within the retail and cinema tenan-cies resulted in quite involved load paths, especially for lateral load. This was because the lateral load bracing is distributed around the shape of the roof. The area of slab surrounding the Pavilion area at roof level was configured as a single annular diaphragm to allow for this transfer of loads.

“As the western side of the Pavilion roof sits adjacent to the cinema complex, bracing couldn’t be inserted through this area,” Robert Bird & Partners explained. “You can’t have bracing passing through the middle of the cinema lobby.” The entire Pavilion roof sits approximately 8m above the complex’s uppermost retail and dining level. “The final height and profile of the roof has been dictated not only by the head height requirements of the cinema and restaurant operators but also by the smoke extraction and smoke reservoir requirement from beneath the Pavilion,” added the Westfield design team. Assembling the roof structure will be a colossal procedure, and will involve the sub-contractor supplying 460t of steelwork. The construction method will then involve the company assembling 71 trusses which all vary in size and shape, but are typically in the 16m x 5m size region.

Each truss consists of a number of six-pronged nodes connecting to 200mm x 100mm RHS’s, thus forming a grid for either triangular glass panels or cladding. Westfield says 50% of the Pavilion roof is glazed, while the other half of clad structure consists of 30% clerestory which is acoustically treated.

Because of the complex grid pattern and the number of curvatures in the roof structure’s form, all of the 1,623 nodes are a different size, and likewise all of the 5,000 steel members are different lengths.

All of the steel trusses will be assembled in one on-site area, a typical span consisting of three such trusses. The units will be welded, and then lifted into position by one of the site’s tower cranes supported on a structural scaffold. The steel or glass insert panels will then inserted by crane once the truss has been fixed into position.

The construction of the complex and eye-catching roof will be one of the final phases of the project to be completed. Meanwhile other aspects of the scheme will include adjacent affordable housing, a new steel-framed library and a children’s nursery.

Summing up, Mr. Askew says this is a huge project, especially for the steelwork. “At times we’ve had up to five erection gangs on-site. However, this is set to increase in March to six gangs as we begin the steel build-up of the centre zone of the project above the old rail sidings,” he adds.

Westfield London also forms part of a massive £1.6bn regeneration project in west London and once the project is complete in 2008, the area is set to rival Oxford Street as the capital’s traditional shopping district.