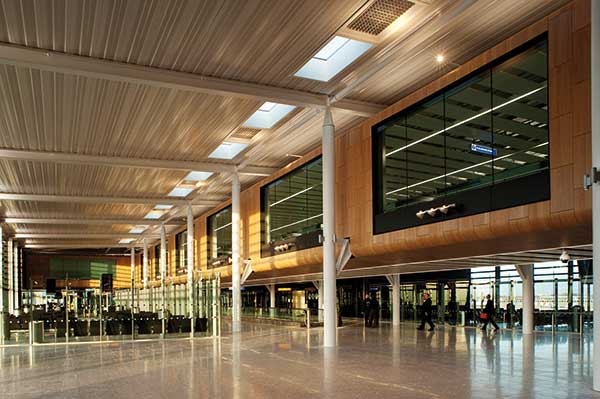 Construction of Heathrow Airport’s satellite Pier 2B is now at an advanced stage with phase 1 of the project open to passengers, and phase 2 set to open in 2014.

Pier 2B, part of BAA’s £5bn investment programme under way across the Airport, is the satellite for the new Terminal 2, which is also currently under construction.

Linked to the main terminal building via a walkway under the airfield, Pier 2B is 522m long and will service 16 long haul stands, six of which are already in use.

Working on behalf of main contractor Balfour Beatty, Watson Steel Structures has recently completed the erection of some 5,000t of structural steelwork.

One of the main architectural visions for the project is to have a light and airy building and this vision is being aided with the installation of feature internal columns.

The departures and arrival halls are formed with a series of CHS columns with bespoke connections.

“The internal columns and steelwork have bespoke connections which creates the impression the arrivals corridor is floating above the departures floor,” says Andrew Luter, Watson Steel Structures Project Manager.