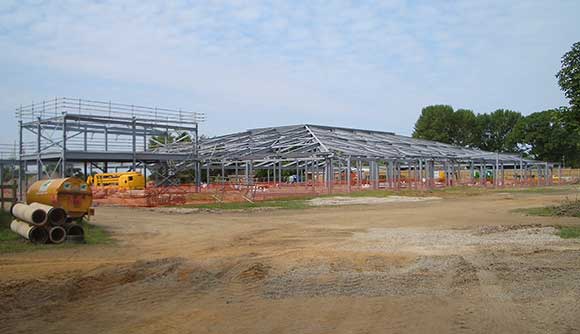 The two storey braced plant was the first to be erected, providing stability for the rest of the structure.

Some types of construction job do not come along very often and consequently because of their unique attributes they provide the project team with a number of unusual and ultimately fulfilling challenges. One such project is the work being undertaken at Warwickshire’s Twycross Zoo, where a new visitor centre with an attached snow leopard enclosure and a wading bird sanctuary is being created.

Gone are the days when zoo exhibits were confined in bare prison-like cages with barren concrete floors, today the focus is on conservation and animal welfare, which contributes to a better environment for all, including the all important fee paying visitor. 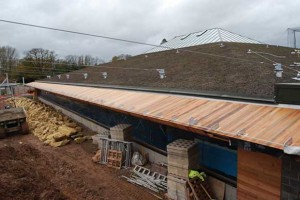 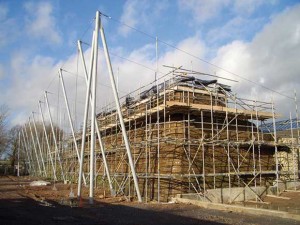 The Twycross Himalaya visitor centre will combine a 300-seat restaurant, retail space, administration offices and ticketing booths with a 50m-long glazed elevation looking out on an enclosed Himalayan landscape replete with two rare snow leopards. On the opposite side, the new centre will also feature a function room for conferences and events overlooking a naturalistic wetland aviary for wading birds.

To enhance the snow leopard enclosure’s authentic Tibetan mountain scenery, it will contain a 7m-high landscaped embankment featuring a waterfall and typical fauna, while the feline’s indoor shelter – where the animals will have some privacy away from visitor’s prying eyes – will be designed to mimic a Himalayan retreat.

“Projects like this don’t come along very often,” says Adey Steel Contracts Manager Eric Gaunt. “However, since starting this job we have also completed another tension structure housing an aviary in France.”

Not that Mr Gaunt envisages Adey Steel being pigeon-holed into this niche market, but with many zoos expanding their exhibits to include more animal-friendly and naturally landscaped enclosures, he thinks this could turn out to be an expanding sector.

Main contractor Kier Marriott has been working on a 48 week design and build programme since March and the £6.7M project is scheduled to open in time for the busy Easter period.

Timescale is obviously important on this project, but a number of other factors came into play during the design stage. Initially the main visitor centre was to be a concrete framed structure, but once the job got to the tender stage, budgetary constraints meant the plans were revised with a steel framed solution being chosen.

Phil Lloyd, Director for Lloyd Cullen, explains: “We proposed a steel frame with a smaller 8m x 8m grid pattern with an attached two storey plant area, as opposed to two separate plant rooms, and slightly reduced the building’s overall height by half a metre. This resulted in a more efficient structure which was also quicker to erect.”

A lighter steel frame also had the knock-on effect of contributing to less groundworks as a cheaper and less time-consuming foundation methodology was used. A concrete frame would have needed piled foundations, but the steel frame sits on pad foundations – which are quicker to install – and a suspended ground floor slab.

Steel erection began with the two-storey plant building, which is a beam and column structure with a footprint measuring 15m x 20m.

“This is a heavily braced box and by erecting this first it provided the stability for the remainder of the visitor centre,” explains Mr Gaunt. “It’s also the part of the project furthest from the access point, so it meant we were never in danger of being hemmed in.”

Once the plant area had been erected the adjacent single-storey administration area was built followed by the main visitor centre structure.

Although based around a regular grid pattern the visitor centre features some intricate geometry as the roof pitches in two directions and the two enclosures, situated along three elevations, bring additional loadings to the steel frame. To accommodate these loads some columns have had to be moved, making the grid pattern slightly irregular. The visitor centre is also heavily braced, both vertically and horizontally.

Every corner of the visitor centre structure has a different steelwork configuration because of the associated loads and the hipped and square cantilever soffits which run along each of the elevations. A high degree of attention to detail was employed by Adey to ensure that all of the critical interfaces, such as CHS enclosure columns, tie bars, tension cables, netting, glazing, cladding and external gabion walls all worked as intended.

“Our designed and detailed structural netting connections to the interfacing building perimeters being a typical example,” adds Mr Gaunt.

Metal decking has been installed to the centre’s pitched roof as its green sedum covering needed a flat surface. The composite deck’s diaphragm action together with a 50m-long roof girder, installed parallel to the enclosure’s window, transfers the loads from the leopard enclosure to the structure’s vertical bracing. 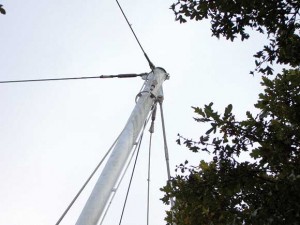 Steelwork for the main visitor centre was completed in May and Adey then returned to site in September to erect the two enclosures. “An early decision was taken to form splices at all of the tubular guy cable supports in order to facilitate the earliest installation of the main frame thereby enabling early access for follow-on trades while our detail design of the enclosure structures continued,” explains Mr Gaunt.

Everyone involved with this project agrees that it is a unique and rewarding job. Complex geometry and unusual loadings have been overcome to provide Twycross Zoo with an impressive structure featuring exhibits that will give visitors an opportunity to experience the real-life environment of both snow leopards and wading birds.