Bridging the new road to Bedford 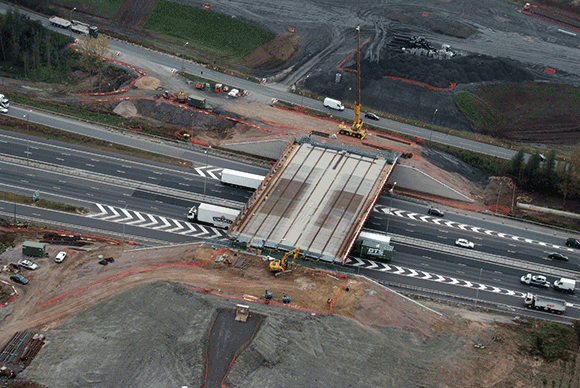 Steel has proven to be the most cost effective and efficient solution for the construction of seven bridges along the new A421 dual carriageway in Bedfordshire.

The A421 between M1 Junction 13 and the Bedford Southern Bypass is being replaced with a new highway currently under construction slightly to the north of the existing road.

Largely single carriageway, this stretch of the A421 regularly accommodates 25,000 vehicles per day leading to considerable congestion, particularly during peak hours.

“This high volume of traffic results in a poor accident record as there are few overtaking opportunities and a major reduction in the quality of life for local residents,” comments Roy Brunsden, Project Manager for the Highways Agency.

To alleviate these problems a brand new 13km long section of the A421 is being constructed, featuring dual two lane and three lane carriageways and with road crossings being replaced with bridges.

After considerable local consultation as to where best to position the new road – avoiding local communities as well as old brick pits which litter the surrounding countryside – the project started on site in October 2008.

The project team, which includes main contractor Balfour Beatty, designer Scott Wilson and consultants Jacobs, put a lot of time and effort into ensuring the new highway not only fits in with the local topography, but more importantly had the fewest number of junctions possible. 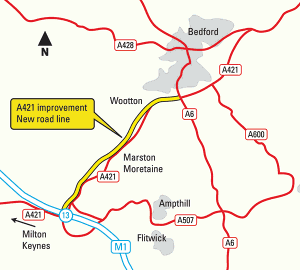 The existing A421 has a number of small roads crossing it and all of these will have a dedicated bridge over the new highway. Meanwhile at Junction 13, a remodelling of the traffic layout is taking place, whereby the new A421 will cross the motorway via a new bridge, avoiding the busy junction 13 altogether and linking into the existing A421 dual carriageway, west of the M1, for Milton Keynes.

“Most commuters travelling west along the A421 don’t need to use Junction 13 for the M1 as they are going to Milton Keynes. By taking the new road off the junction we’ll make it less busy, while new roundabouts will link the M1 motorway with the new A421,” explains Phil Clifton, Project Director for Balfour Beatty.

Value engineering came to the fore when deciding on how to construct the 14 bridge structures required along the route of the new highway.

“Cost, quality and ease of construction were of major importance and so we decided that all of the longer span structures – over 30m long – would be built with steel,” says Mr Clifton. “With steel there is a more efficient sequencing of work, less working at height and they are also quicker to erect as we can bring larger pre-assembled sections to site.”

Value engineering also resulted in steelwork contractor Mabey Bridge being awarded the contract to fabricate, supply and erect seven instead of six bridges. One structure’s design being changed from concrete to steel as it was deemed more cost effective and quicker to construct.

The other bridges along the route, all carrying minor roads, will be constructed with precast and insitu concrete, while a footbridge is to be built as a warren truss structure and fabricated and erected by another steelwork contractor, Nusteel Structures. 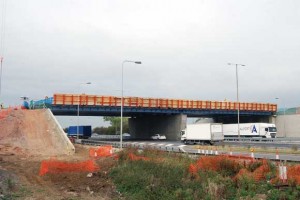 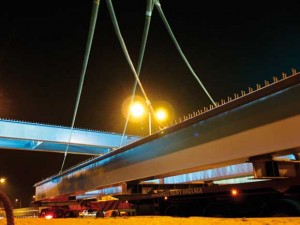 The largest and one of the first bridges to be erected on the project was the Brogborough Bridge which is the most easterly structure of the project and will take the new A421 over the M1. Designed to carry four lanes of traffic over one of the UK’s busiest motorways, the steel erection for the bridge deck was completed during five night time partial closures.

The Brogborough Bridge is 62.5m long with a concrete central pier and concrete abutments, which were completed earlier in the programme. Girders of this length were too long to bring to site in one piece so the bridge was erected with eight braced pairs of girders, four for each side of the central pier with a 3.5m spacing between each pair.

The erection sequence, using one 250t capacity mobile crane, involved erecting one pair of braced girders on the first night.

A similar lifting procedure was then conducted over the northbound carriageway over the next two nights.

With value engineering being paramount to the overall success of the scheme, the weight of the Brogborough structure was reduced from 369t at tender stage to 255t. “This was a credit to all involved and a considerable cost saving,” adds Mr Hosking.

Commenting further on the lifting procedure, Mr Clifton says: “As all of the girders were brought to site in braced pairs no on-site assembly was necessary and they were lifted into place quickly with minimal disruption to the M1. Bearing in mind our partial closures only lasted from 10pm until 5am and we needed at least one hour to rig and then di-rig the crane, everything went to plan.”

Since completing the steel erection of the Brogborough bridge, the slab has been cast, using 400m³ of concrete.

Works commenced in late August with the erection of the Fields Road North structure. During October two other bridges were erected along the route, Salford Road and Wood End with the Vale Farm Bridge being lifted into position early November. The first two structures carry minor roads across the new A421, while Vale Farm is a non-vehicular bridge consisting of two 35m-long girders lifted individually and then braced up in-situ.

Salford Road was erected over a couple of days and is made up of seven 35m-long girders spaced at 3.85m, while Fields Road is a smaller structure requiring only four 33m-long girders.

“The bridges are not being erected in any geographical sequence,” says Mr Clifton. “There are major works all along the 13km project route and once the earthworks, foundations and abutments are ready each bridge is erected. By using steel on all the longest bridges the erection process is then quick and easy with less working at height as the girders come to site fully assembled.”

One of the other aspects of this major civil engineering project is the earthmoving. More than 800,000m³ of overburden is being removed to form two large cuttings near Marston Moretaine, about half way along the route. None of the earth is leaving the site, all of it being transported by a fleet of 40t capacity trucks to other parts of the project for in-filling or to form embankments.

The remaining two steel bridges, Marston Junction and Manor Farm, will be erected in early December and January respectively by Mabey Bridge. The new A421 will open at the end of 2010.

The Highways Agency has specified that all steel bridges along the new A421 are painted with a zinc based system as opposed to a traditional aluminum metal spray coating. Previously trialed on steel structures for the Channel Tunnel Rail Link (CTRL), the system is said to be a cost effective alternative to the aluminum metal sprayed systems with a greater ease for application in both the works and on site.

The only painting to be completed on site will be areas around the bolted joints as all other items are applied with a full system at Mabey Bridges’ facility in Chepstow after completion of the fabrication process.

“As well as being a low maintenance system, requiring infrequent repainting, the system has a blue hue and aesthetically was right for the project,” explains Mr Brunsden.