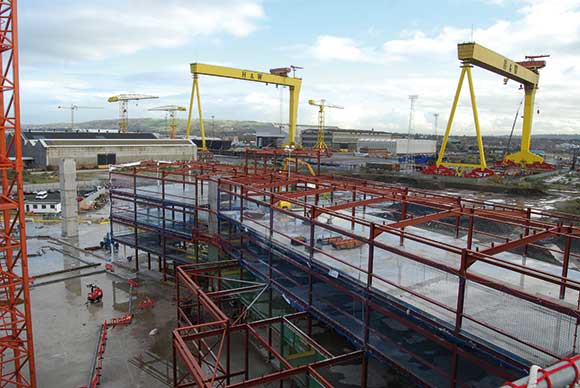 One of the college’s two cranked wings overlooked by Samson and Goliath, Harland and Wolff’s famous cranes

Belfast’s once thriving shipyards, now rechristened the Titanic Quarter, are in the midst of a major redevelopment with a new college one of the first projects to get underway.

Where once the famous RMS Titanic passenger liner was built and launched, a new dynamic district, including apartments, educational establishments, offices and riverside entertainment is now planned in Belfast.

Aptly named the Titanic Quarter, this 185 acre site, formerly known as Queen’s Island and previously owned by the Harland and Wolff shipyard, is situated on reclaimed land in the city’s harbour and set for a transformation. 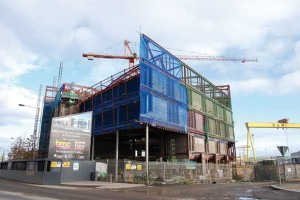 The tip or prow of the new structure 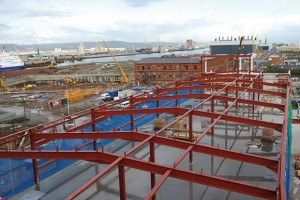 Due to open in 2011, one of the first projects to get underway is a new premises for Belfast Metropolitan College, which will replace two existing and outdated college buildings in the city centre. The new college will have a capacity for 2,500 students and offer a wide of range courses including hospitality and catering, business and management, performing arts, craft and design, science, and sport and leisure.

Todd Architects’ Emma Logan, says the concept for the development is founded on creating a strong campus identity which will convey its civic role, respond to best practice educational principles and become a vibrant living community for those who work there, study or visit.

The steel framed building comprises a pair of cranked ‘arms’ embracing an inner courtyard. Vertical circulation, services and sanitary facilities have been clustered around the joints between the blocks. The arms have four storeys of teaching accommodation, linked at the southern end of the site by a series of inhabited bridges contained within a five storey triangular atrium.

The main focus of the southern end, or front, of the college is not only the building-high glazed atrium but also its ship-like triangular tip, which has been dubbed the prow. The northern end of the structure meanwhile, where the two wings converge is linked by three footbridges spanning the access route into the site’s basement car park.

Commenting on the college’s apparent ship-like appearance, Ms Logan says the main driver for the project’s design was in fact the available plot of land and not the surrounding shipyards and nautical heritage. The perceived ship-like appearance is coincidental. “The shape of the plot dictated the design of the structure as it follows the line of the surrounding streets and the front wedge is orientated towards a complex geometry of roads.”

Steelwork contractor Walter Watson erected 1,500t of structural steelwork for the project during a 15 week programme. “Speed of construction is important for this job,” explains Trevor Irvine, Walter Watson General Manager Structural Division. “With just one erection team we erected 100t a week.”

Beginning with the five storey prow and atrium, Walter Watson erected steelwork in a northerly direction completing the two wings last. The structure sits atop a large concrete podium containing an underground car park, which was completed prior to steelwork erection beginning.

Aside from the atrium which features 15m clear spans, the majority of the project is based around a repetitive 7.5m x 7.5m grid pattern. The erection was phased with the initial sequence seeing the five storey element being erected up to third floor level and the wings up to second floor level. This allowed the concrete contractor to follow on behind and cast floor slabs, before the upper levels of steelwork were added.

Interestingly, the college was not always envisaged as a steel framed structure as Mott MacDonald’s Project Engineer Steve Evans points out. “During the bid stage a concrete frame was favoured, but as the local construction market was busy at the time there were supply concerns and in the end a steel frame was chosen. However, due to the repetitive nature of the building grid, the steel frame option actually offered a number of significant benefits, not least the speed of construction.”

Another consideration was that the columns in the basement do not bear any comparison to the desired grid pattern for the college structure above. With the 475mm thick concrete slab acting as a transfer structure, the lightweight frame proved to be a highly efficient solution that facilitated ongoing design development that continued throughout the early phases of construction.

The steel frame has a mixture of concrete cores and vertical bracing supplying the needed stability. Because of the large amount of windows along all elevations, bracing has been secreted in blockwork cavities or partitions.
The main entrance to the new college will be to the side of the tip of the prow and this will lead visitors and students alike into the atrium. The characteristic tip of the prow has been formed with a series of CHS columns along two converging elevations, with beams spanning between them.

To the back of the atrium there are five levels of student support facilities and classrooms separated from the structure’s two wings by a movement joint, which is positioned where the building steps down from five to four levels.
The wings have been formed with a beam and column construction except for the top level of each wing, where a series of portal frames have been installed.

“The top floor of each wing was portalised to provide column free teaching spaces,” explains Mr Evans. “In the event, this simple approach in steel provided an elegant solution that was easy to construct and cost effective.”
Other projects are also planned for the Titanic Quarter and the local press have predicted the area may eventually develop into a hi-tech orientated sector, similar to Paris’s La Défense. 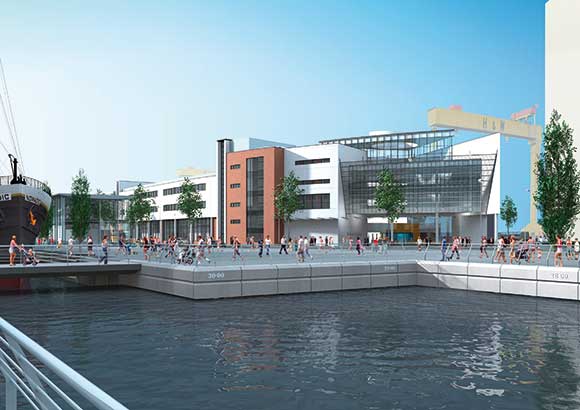 Impression of the completed college in its historic nautical setting