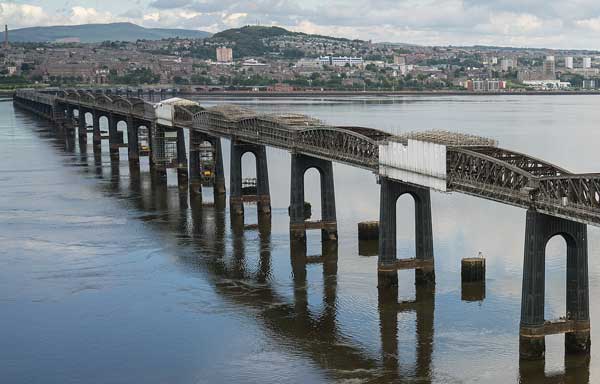 Following a 20-year refurbishment of the Tay Bridge, the UK’s longest railway structure, the work has been recognised as an outstanding achievement and awarded the top prize at the National Railway Heritage Awards.

The prize went to Network Rail and main contractor Taziker Industrial, which carried out the extensive programme of strengthening, repair and repainting works on the Category A-listed bridge.

Local repairs and repainting of its approach spans started in 1996 while strengthening repairs took place between 2000 and 2004. Grit blasting and repainting began in 2006 – with a total of 245,000m² of wrought iron and steel repainted.

Spanning a distance of 4.4km, the Tay Bridge carries the railway across the Firth of Tay. It was built between 1883 and 1887 and consists of 80 spans constructed of wrought iron and 44 masonry arches on the approaches to the north and south.

Large quantities of materials were used in the construction of the bridge, with approximately 16,000t of wrought iron used for the piers and girders. A further 3,500t of steelwork was also used along with 2,500t of cast iron. The structure also contains more than three million rivets.

Matthew Spence, Route Delivery Director for Scotland at Network Rail, said: “It is great to see the project recognised in this way and this award caps two decades of hard work in what can be extremely testing conditions.

“Delivering a job of this scale in such an exposed location has been an ongoing challenge for our engineers and our contractors, but with the refurbishment now complete, the bridge will require minimal maintenance for the next 25 years.”