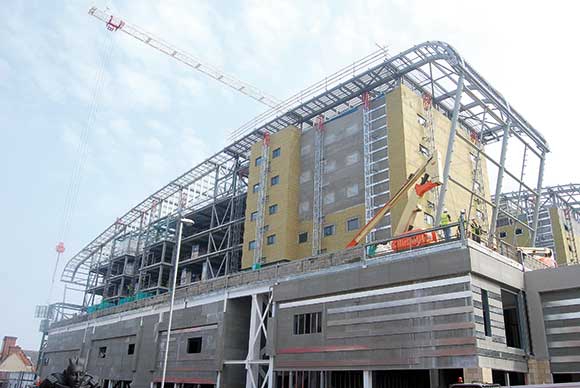 Shops of varying sizes are situated below the student blocks

Trinity Square in Gateshead town centre is a £150M development by Spenhill, the regeneration subsidiary of Tesco, the latest in a long list of projects, such as the Baltic Centre for Contemporary Art and the Millennium Footbridge, that are helping to transform this part of Tyneside.

Most residents would agree that Gateshead’s central shopping district was overdue for a facelift. A tired looking retail mall and a large concrete multi-storey car park – made famous by its inclusion in the Get Carter movie starring Michael Caine – have been demolished to allow a new and vibrant multi purpose development to take shape.

The scheme is a key part of Gateshead Metropolitan Borough Council’s regeneration strategy. Trinity Square is being constructed on a prime spot opposite the town’s bus and Metro stations and will be linked to the surrounding streets via a retail street that will encompass a new public square. 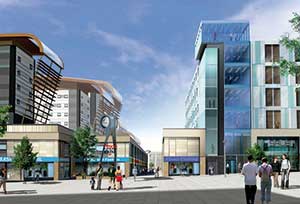 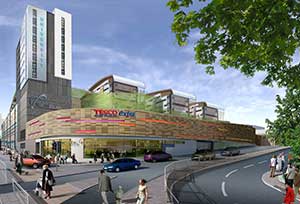 An 11,148m² Tesco Extra store anchors the development. On top of the store there will be five blocks containing 933 student accommodation units.

The overall development aims to promote economic activity within Gateshead town centre and having a resident student population living within the scheme will help.

“Students will use the amenities such as the cinema, adding vibrancy to the new town centre,” explains Paul Dodsworth, Bowmer & Kirkland Projects Director.

Trinity Square will have 45 retail units arranged around three sides of the development and along the mall that leads directly from the Metro station to the new square.

The project will also include a 720 space underground car park, a 2,700m² office block, a nine screen Vue cinema and a primary care trust.

More than 10,000t of structural steelwork will ultimately be erected on the scheme (including 500t of cold rolled secondary steelwork being installed by Cairnhill Structures), more than was used to build the nearby Swing and Tyne Bridges combined.

As all of the structures are steel framed the material is playing a key role in the construction programme. Following on behind the groundworks team, steelwork is being erected by William Hare. The company started at the site’s southern end and is working northwards using a combination of the site’s tower cranes and its own crawler units.

The majority of the site’s previous buildings were demolished early in the programme, however an existing Tesco store occupied the northern part of the site and was open for business right up until late April 2012. This meant work was being carried out around a busy shop, and once steelwork erection commenced the site was fairly confined and available space for material storage was minimal. 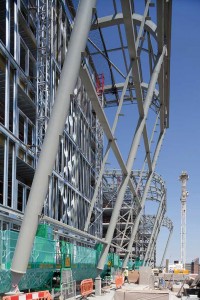 However, even after the store was demolished there still wasn’t much room, as groundworks were ongoing in the area that the Tesco store previously occupied and other trades followed on close behind the steel erectors.

Consequently logistics and on site planning have been key issues on this project and there is a need to phase the construction programme. This meant structural steelwork was the best solution for the development.

“Steelwork has given us the flexibility we needed,” explains Ron Bryson, Fairhurst Project Partner. “We’ve had to incorporate changing grid patterns between levels, significant transfer structures, phased erection on multiple fronts and a challenging construction programme, all of which have been more easily accommodated with steel construction.

The area where the grid patterns change the most noticeably is above the new Tesco. The roof of the new store supports the five accommodation blocks and this podium level is constructed with a number of large plate girders acting as transfer structures.

The underground car park – which covers roughly 80% of the project’s footprint and the new Tesco, which sits directly above it – both require large open column free spaces.

For these two levels a 16.1m × 7.5m grid pattern is being used, but higher up on the Tesco store’s roof the grid significantly decreases to a variable and smaller pattern, more suitable for the accommodation blocks. 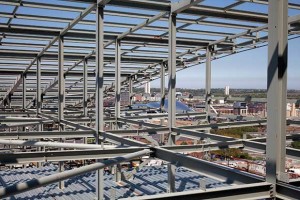 The scheme’s varying usages require a number of grid patterns

“The columns for the accommodation blocks do not match the column lines below, so the plate girders carry the loadings from above and transfer them to supporting columns and then into the foundations,” says Chris Robinson, William Hare Associate Director for Engineering.

The plate girders are 1.9m deep and weigh 30t each. Supporting them is a series of bespoke fabricated box sections 550mm square. “We couldn’t get column sections this large in the timescale required so we are fabricating our own,” adds Mr Robinson.

Accommodation block one, which is situated above the entrance hall, is the largest podium structure with nine storeys. The middle three blocks – two, three and four – are split in half, creating a central walkway linking block five with block one.

Each of the blocks are spanned by a feature steel framed canopy roof. Structurally independent from the rest of the steelwork they support a series of louvres. Adding to the canopies feature status, they are supported by large raking CHS columns at either end.

Steel erection is generally phased with all areas of the project relying on bracing for both temporary and permanent structural stability.

As the project has so many diverse areas with differing grids and is being erected in a phased manner on multiple fronts, temporary bracing has also been erected along with the main steel. The temporary works are generally removed once a phase is completed and stability is assured.

The entire steelwork programme is due to be completed by the end of this year. The retail elements of Trinity Square will open during the spring of 2013, with the accommodation units ready in 2014. 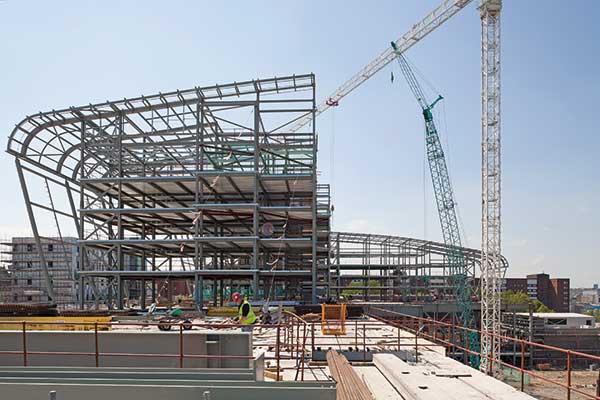 The Trinity Square site slopes in two directions – south to north and also to a lesser degree from west to east. To take these differences in level into account only one corner of the site incorporates level one, which accommodates the entrance hall for the student accommodation blocks, a small amount of street front retail space and car parking and servicing for the student blocks. Level two is the car park, which covers roughly two thirds of the project’s footprint, while level three houses the Tesco store, the retail mall, civic square and lobby access to the ground floors of the cinema and office/hotel block.

Level four is the potential mezzanine and above this level five is also known as the podium as it is the roof of the Tesco store. This is where the accommodation blocks are located in an area that will become a student village, incorporating landscaped outdoor areas, a running track and even a five a side football pitch. 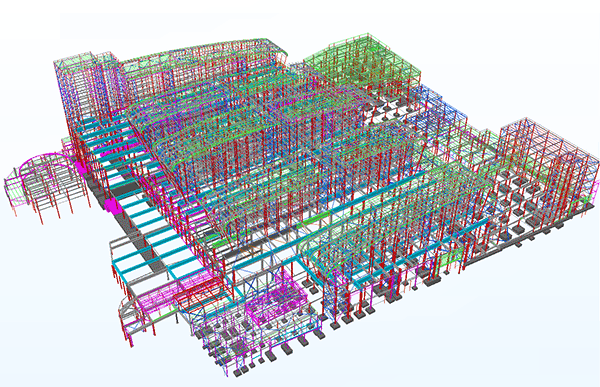 Steelwork’s flexibility has proven to be very important on the Trinity Square project. The main Tesco store will have an extensive plant mezzanine level (level four), but the remaining 45 smaller retail units are being constructed without this level. However, each of the units can have a mezzanine level added in the future, provision having been made in the frame design and unit heights.

“Once a tenant takes possession of a unit they can then decide if they need an extra floor which can then be easily slotted in,” says Mr Dodsworth.

Another part of the project benefiting from steel’s flexibility is the five-storey office block. This structure has been constructed around a 7.5m x 10.5m grid, big enough for an open plan office arrangement. But if market conditions change, the gird is also large enough to allow an internal fit-out to convert the structure into a hotel.