Retail is just the ticket for station upgrade 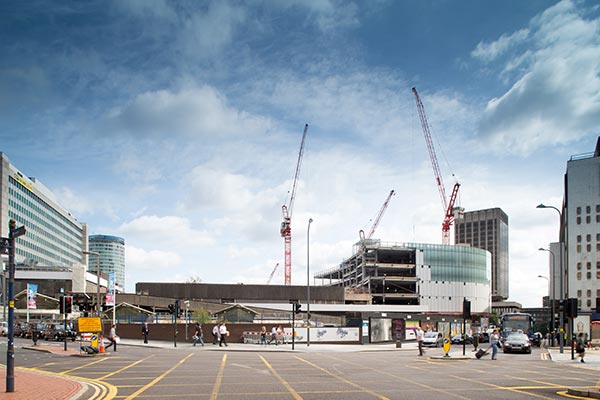 A number of unique challenges are being successfully overcome as a steel framed department store is built beside and over the UK’s busiest rail interchange. Martin Cooper reports.

Birmingham New Street is undergoing a major redevelopment that will transform what is universally recognised as a dark and unwelcoming station into a light filled modern facility fit for the 21st century.

The project is due to be fully completed in 2015 and includes a spacious concourse and retail area enclosed by a giant ETFE clad atrium, more accessible platforms served by new escalators and lifts, and a new station exterior.

The retail part of the scheme is important, as it will transform the station into a destination not only for rail passengers but also for city centre shoppers.

Situated above the concourse the retail zone is known as Grand Central and will be anchored by a four-storey 23,500m² John Lewis store.

This steel framed structure recently topped out and is one of the more advanced parts of the overall scheme.

Approximately half of the store’s footprint sits on top of an existing station concrete structure and this necessitated a thorough review of both the existing frame and foundations which then resulted in a more complex design than would ordinarily be expected. 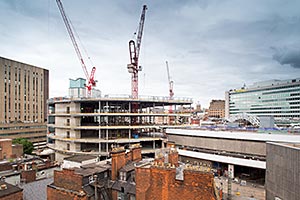 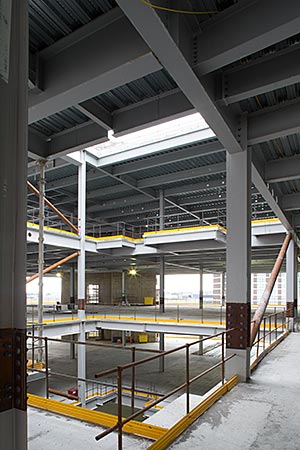 A large void penetrates the centre of the store 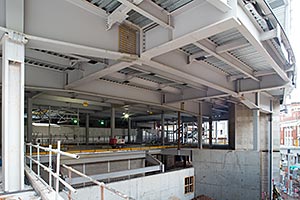 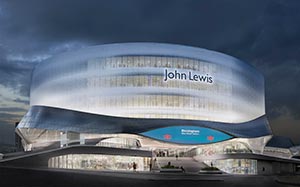 The John Lewis store was a late addition to the scheme and much of the design work for the station had already been completed prior to its inclusion.

“The demolition of Stephenson Tower created some space for the construction of the new John Lewis building, however a substantial part needed to be built over the existing station. To achieve this some of the existing heavy concrete frame needed to be demolished and replaced with a new lightweight steel frame in order to not overload the remaining foundation,” explains Atkins Project Engineer Mike Stephens.

Information of the existing piled foundations revealed that a limited amount of additional load could be accommodated. This still meant the new frame needed to be as light as possible to achieve the desired four-storeys. Weight was one of the main reasons why steel was chosen as the framing material.

In some locations the new steel structure surrounds the existing reinforced concrete beams. To ensure loads are transferred through and not carried by the existing structure, an online monitoring system has been installed to the 18 new columns that sit on the concrete structure. This system consists of highly accurate level monitoring equipment, strain gauges and load cells.

Underneath the existing structure steel columns have been installed to add extra support. A system of flat jacks has been fitted to these columns which allows any settlement of the new foundations to be jacked out and the forces above the below the existing structure to remain in balance. The columns can also be monitored during the entire construction phase and the later fit-out programme, again ensuring the loads are not too high.

“This automated system allows us to check that we are minimising the weight in these areas,” explains Steve Swift, Severfield-Watson Project Manager. “This has made the erection programme more complex and meant our steel team had to be educated about installing the monitoring system.”

The frame has a number of transfer structures, some of which limit the amount of load being transferred to the existing station structure. Above platform 12 there is a series of large plate girders installed within the store’s roof. Measuring up to 20m in length and weighing in excess of 15t each, they were all erected with temporary columns supporting the area directly above the station.

Once the building’s floors have been cast, the temporary columns will be removed and the floors above will hang from the plate girders, to ensure that in these areas the loads are carried by new piled foundations.

Severfield-Watson has not only erected the project’s steelwork, it has installed stairs and taken on much of the concreting works, such as slipforming the cores and installing the floors. To further save weight the floors are all of a composite design comprising metal decking and the thinnest possible topping.

“Much of the frame’s stability is derived from the cores and we had control of their construction and the installation of the cast-in plates for our connections, all which are bespoke,” says Mr Swift.

The majority of the steel frame has been erected around a regular grid pattern of 10.9m x 9.6m. Most of the steel sections are of a transportable size with the exception of two large plate girders that span over the new southern entrance.

Known as the Spanish Steps, this will be one of the main entrances into the redeveloped station. The plate girders, which support four levels of retail frame above and create a large column free area, are 33m long and had to be brought to site in three pieces.

Working on a major construction project in the middle of the UK’s second largest city is in itself a tricky undertaking, this is compounded by keeping New Street fully operational throughout the scheme.

“It’s a live station environment operating for almost 24 hours each day, so we have limited windows of opportunity for large lifting operations and the movement of materials,” explains Jeremy Haldane, Mace Associate Director.

“The site is also very confined and surrounded by busy city streets and all steel deliveries and lifts have had to be fully coordinated, all of which has been done very successfully through meticulous planning.”

A new station for Birmingham 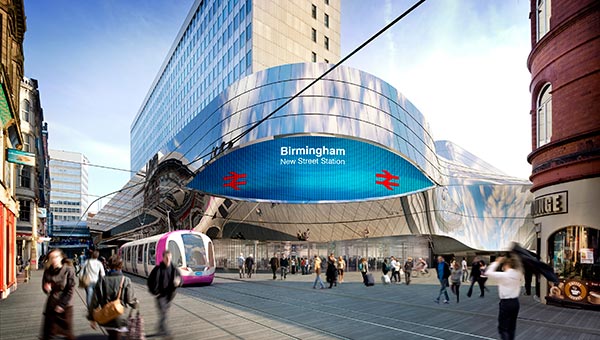 As well as the John Lewis store, structural steelwork is playing a significant role in other areas of this major project. Severfield-Watson has erected approximately 2,000t to form the new station concourse and new platform entrances.

Under a separate contract structural steel has formed the new station exterior, a faceted curving façade, which incorporates the John Lewis store, onto which a stainless steel cladding is being installed.

Apart from the John Lewis store the most prominent feature of the project will be the atrium of the Grand Central shopping mall that will be formed by a series of 30m long arched steel box section trusses.

Load sharing between the existing and new structure at New Street

Construction of the new building over the existing New Street Station involves load sharing between the existing and the new structure. Monitoring and adjustment is required to ensure that the existing structure is not overloaded. Dr Richard Henderson of the SCI explains. 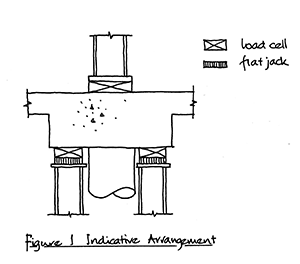 The new columns support a series of transfer beams at roof level which act compositely with the concrete slab. In the permanent state, these transfer beams support three levels of steelwork which, during the erection phase, were supported from below. Following the casting and the development of sufficient strength in the concrete at roof level but before casting concrete on the floors below, the temporary supports were removed and the structure was lowered until it was hanging from the transfer beams. During this operation, additional load was transferred into the new columns via the transfer beams, requiring monitoring and control of the load in the existing concrete columns.

This complex project successfully demonstrates the real-time monitoring of load, and careful adjustment of jacking forces to maintain an allowable level of load carried by an existing structure. The sequencing of steel erection, casting concrete and load transfer was carefully planned, including the prediction of structural movements and the selection of connection details to allow the anticipated movement to occur.