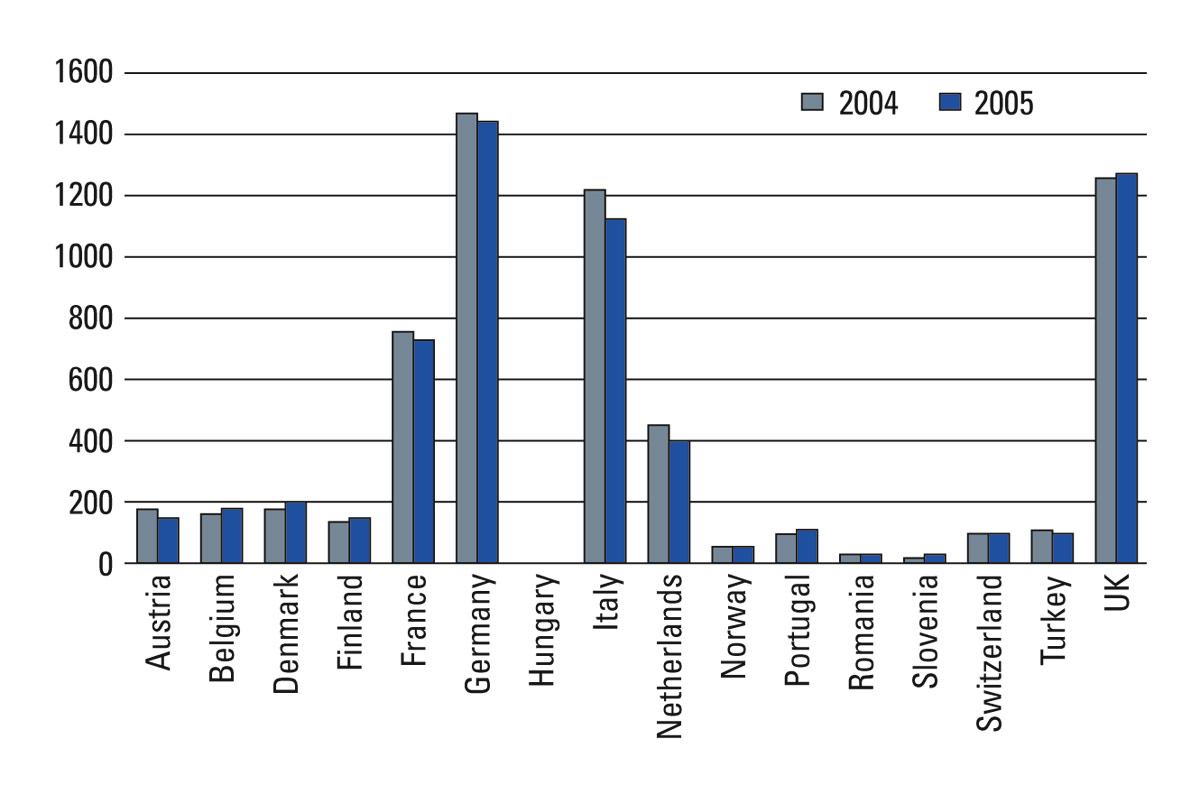 The popularity of structural steel has held up strongly throughout Europe, according to annual production figures delivered to the European Convention for Structural Steelwork. Geoffrey Taylor of Caunton Engineering casts his eye over the numbers.

There was an air of anticipation when the 2005 European Statistical bulletin was issued at the ECCS Convention in Nice in September. How was the much publicised introduction of steel price rises in 2004 to affect the published figures?

The bulletin reports the most recent figures for production of steelwork for each country.   European Convention for Constructional Steelwork members – BCSA represents the UK on ECCS – submit figures every year. In some cases the figures are an aggregate of their members’ turnover; others are from their national statistics. Direct comparisons are therefore none too easy, but they are consistent so they allow for comparisons to be made.

It was comforting to read that the results were to show that in the majority of European countries the effects of the price rises had not seemed to affect sales of structural steel. The doom and gloom projected by some commentators did not materialise. Perhaps it was, inter alia, because the price of steel’s most regular competing material, reinforced concrete, has also risen in cost and price?

The graph, illustrated here, clearly shows the outcome of the price rises has been marginal. Both Germany and Italy have experienced a fall in GDP and this explains much of what is shown in the figures exhibited. In Netherlands the industrial shed market has slowed and their figures reflect this. However, in the main the market shares in these three countries and the sales of structural steelwork in Europe in general have held up well. The German Steelwork Association also predicts that their slowdown, so pronounced since 2000, is bottoming out.  That great structural steelwork engine that in the past has been Germany may well be roaring back before too long

Generally speaking the Nordic countries – in particular Norway with its oil and Denmark with its most successful wind-energy-generation industry manufacturers – are booming. The reported outcome in these countries is growth in residential building and in industrial buildings.  Encouragingly, many countries are winning market share and growing sales of structural steelwork – particularly in eastern Europe. Statistics for Romania, Slovenia and Turkey make very good reading from a steelwork point of view. In the UK as many NSC readers will know, and in many other countries not mentioned here, the market is steady and established. Problems are occurring of course, with fresh challenges from competing materials, but these statistics do help to flag these up.

The bulletin itself is posted on the ECCS website www.steelconstruct.com for those who would like to read in more detail. The publication lists wherever possible the end use of steel per country by market sectors. It also supplies forecasts for production in these sectors. Also, again wherever possible, market share data by sector is recorded. In addition the Bulletin includes historic and forecast macroeconomic data relevant to the European constructional steelwork industry. The bulletin has been published for several years now, and for the fourth year we have included, where data has been available, the total production by country for every year since publication began. Around 15 or so members regularly contribute returns. This we estimate covers around two-thirds of European structural steelwork capacity.

As a member of the ECCS Promotion Management board, I was invited to introduce the contents of the bulletin to the Convention. My presentation in fact not only covered this, for I was then able to briefly explain Corus’s strategy in growing the market share for steel in the high-rise residential market. As frequently reported in NSC, this has been such a great success so far, and it was good to be able to describe what had been accomplished and how Corus has achieved this. This may well encourage the many Convention delegates from other European countries in their efforts to increase their own market shares. Expanding the demand for the product of the steelwork industry throughout Europe is clearly beneficial for every one of us working within the structural steelwork community.