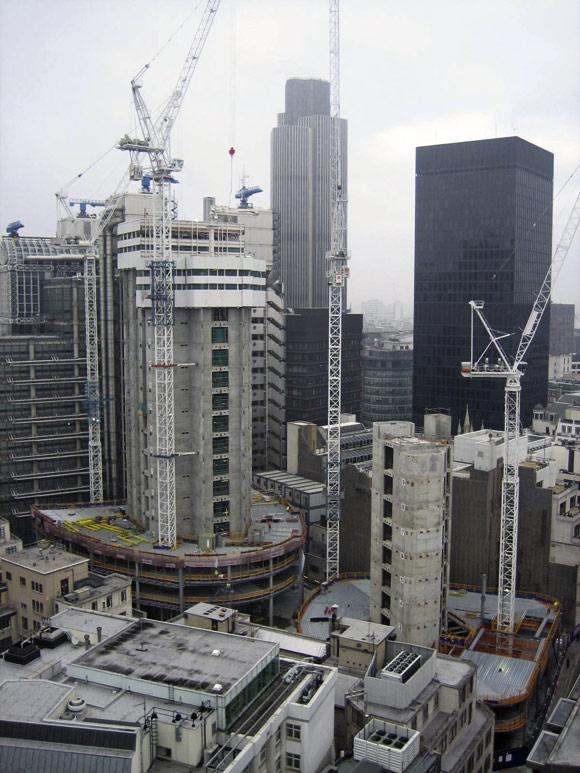 It is 25 years since construction began on Richard Rogers’ iconic Lloyds building in London’s financial heart, but only now is a new building going up on the site of the original Lloyds headquarters that it replaced. The new building – known as The Willis Building – has been designed by Rogers’ former colleague Norman Foster.

The new development at 51 Lime Street consists of two buildings linked at ground floor level and with a common two-storey basement. The smaller building is a curved, 10-storey structure, while the larger is an “arrowhead”-shaped building that steps down in three terraces from 29 storeys to 16. It’s a sleek, sophisticated high rise design that makes the most of the oddly shaped infill site but, like most of Foster’s designs, it is far from simple to build.

“It’s an awkward-shaped building on top of an awkward-shaped hole,” is how Project Director Nick Moore of Construction Manager Mace describes the development. Every elevation is curved, making the floor plates very complex, so the choice of construction method was critical – especially as the 701,062 sq ft (65,000 sq m) development must be built to shell and core in just 18 months.

The entire space has been pre-let to the Willis insurance group, but the project began as a speculative development by British Land, which appointed Stanhope as Development Manager. Stanhope – an expert in delivering complex buildings, with a reputation for fairness and farsightedness in construction procurement – opted for a Construction Management route, with Mace as Construction Manager.

Construction Management, where the contractor manages the project for a fee while the work is carried out by trade contractors employed directly by the client, is designed to eliminate any potential for contractual conflicts between main and subcontractors, and enable all parties to be open and honest about their costs. 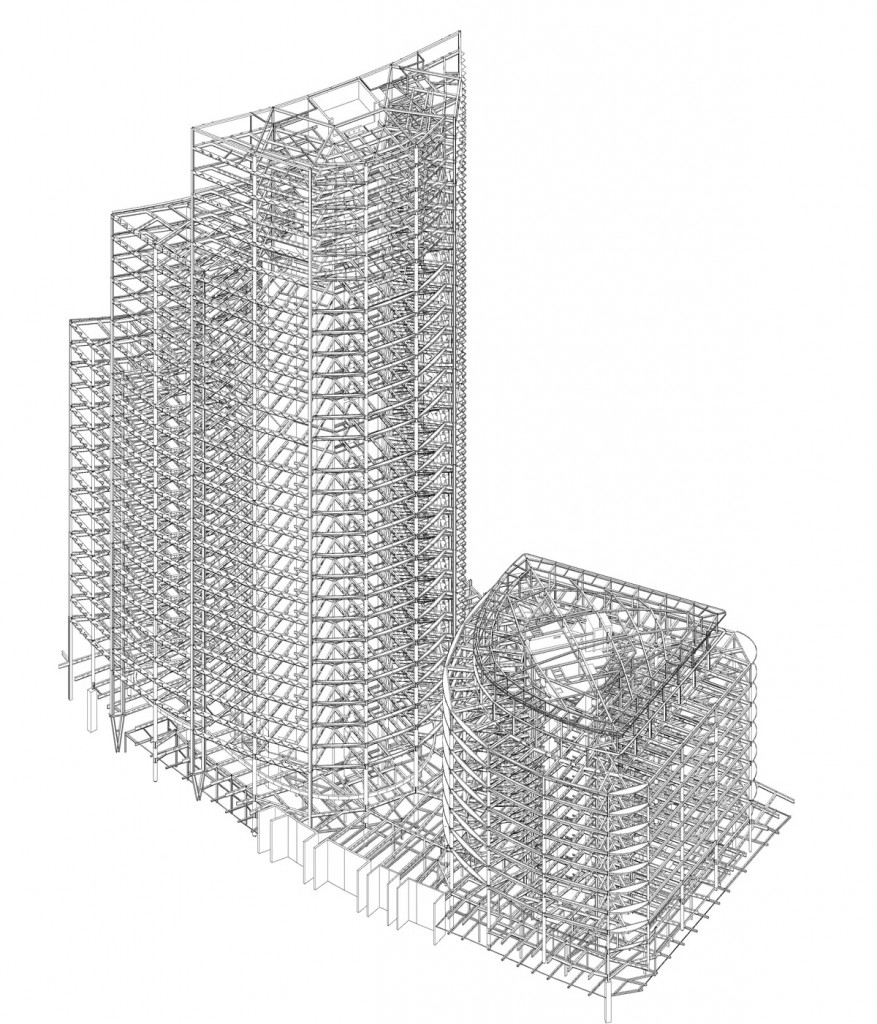 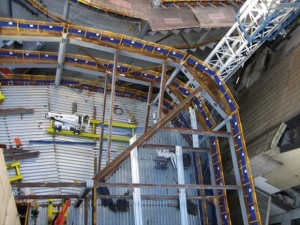 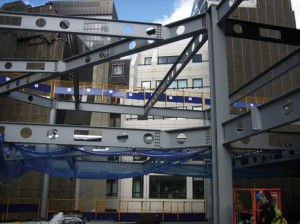 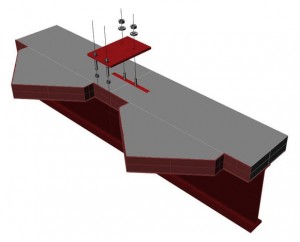 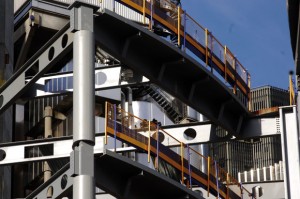 Circular columns were delivered to site pre-filled with concrete

At the Willis Building Construction Management has been combined with close cooperation between the key trade contractors, who were brought on board at a very early stage. For the main superstructure, Mace got the main players together as soon as it was appointed.

Stanhope Technical Director Peter Rogers asked for a comparison to be made between post tensioned concrete and steel, so concrete contractor Laing O’Rourke, steel specialist William Hare and the scheme’s structural engineer whitbybird were brought in to compare the costs and engineering merits of the two.

“Time wise, concrete was faster and not so crane dependent,” says Mr Moore. “Concrete was also initially cheaper, because you don’t have to fire protect it. But it was much, much heavier, which would have added too much cost and time onto the piling and substructure.”

Mr Moore had some reservations about lining and leveling which were resolved by incorporating a jump-form concrete core. “The advantage of the core is that we can fix into it with cast in place plates, which gives us a bit of flexibility,” explains William Hare Director Nick Day. “To us that’s the best solution.”

A prefabricated decking solution was selected – something that had been  used before  but not on the scale of the Willis Building with its complicated floor plates. Using prefabricated decking, with large sheets designed to fit exactly, means there is no on site cutting. The result is a quieter, faster decking process.

According to Mr Day, decking contractor Richard Lees Steel Decking was initially unsure if the prefabrication would work on a building of this complexity, but it proved to be the right decision. Richard Lees Steel Decking Managing Director Nick Grimsey said: “We faced the logistical challenge of getting the correct pre-fabricated deck bundles to the right location on site, at the right time.  By working closely with our deck manufacturers Corus Construction and Engineering Products, we established an efficient and effective logistical process to overcome this.’

Fire protection also receives an innovative solution.  Both the tower and the lower building are entirely glass-clad, with the façade columns exposed. Here, Foster’s design was for circular columns but, rather than going for an intumescent paint finish, whitbybird and William Hare developed what they call the “Lancashire Column”. This is a standard column section with plates welded between the webs and then placed inside a larger circular hollow section with the void filled with concrete. William Hare fabricated these structural columns and delivered them in two storey height lengths to site.

Mr Moore is delighted that they don’t have to be fire protected at a later stage. “That’s one trade on site that I don’t have to worry about,” he says. “One trade whose materials I don’t have to lift up with each floor – which is great on high rise.”

Since being appointed in June last year, William Hare and whitbybird have worked extremely closely, with William Hare designers taking up residence in the engineer’s offices to build a “virtual model” of the steel frame using Tekla Structures. “We built some of the models and they built some, and we passed them back and forwards,” explains whitbybird associate director Peter Chipchase. “There was an element of trust and a lot of checking, but it was the only way to hit the tight programme. It seems to have worked out pretty well.”

The 3D model contains absolutely every piece of detail about the frame, down to the connections, the intumescent paint, and when each piece is going to be made, creating a genuine virtual model of exactly what is built.

The buildings’ primary steelwork consists of 11,700 individual pieces of steel, weighing a total of 5,500t. Although the columns are made of standard sections, the majority of the beams in the two superstructures are bespoke “Fabsec” beams, made by William Hare from welded plate, rather than rolled. The Fabsec beams can be bespoke designed, with each piece of plate the optimum size and with holes cut out for the service penetrations.

Although the beams are slightly more expensive per tonne than standard sections, the overall weight of steel is much lower because each beam is working as efficiently as possible. “We have also played around with each beam size to get the intumescent paint down to a single pass, because it’s such an expensive item,” says Mr Chipchase. “It means some of the beams may be slightly bigger, but that’s much cheaper than running the beams through another pass of paint.”

The building has also been subjected to analysis of how it would behave in different fire conditions. This analysis resulted in the fire rating being reduced from 90 minutes to 60 minutes in some places.

Sustainability issues are high on the agenda. “Part of the way into the cladding design – which we had assumed would be straightforward – we were told that the client wanted the building to get a “Very Good” BREEAM rating,” recalls Mr Moore. “Fosters did a solar study, and came up with an intermittent saw tooth design for the cladding around the curved facades of the north and south elevations. It left us wondering how we were going to deal with the slab edge.”

Again, the solution was steel. whitbybird and William Hare designed and fabricated a saw tooth edge detail for each section of the façade, which acts as the stop end for the deck and will allow the glazed cladding to be fixed in exactly the right location. On plan, every saw tooth section is different, as they are all angled to suit the movement of the sun and provide the correct levels of solar shading.

“Without this detail, we would have had to set them all out individually,” says Mr Chipchase. “There are 40 points for each bay, and 15 bays around the perimeter on each floor.”

William Hare has been involved in the job since June 2004, although steel erection did not start until last September. Main steel had reached the fifth floor above ground on both the tower and the lower building by February, although more than one third of the total weight of steel has gone in – thanks to the heavy steel frame in the two basement levels. The record set by the erection team is 52 pieces placed and fixed in a single day. Erection is due to finish in June this year.