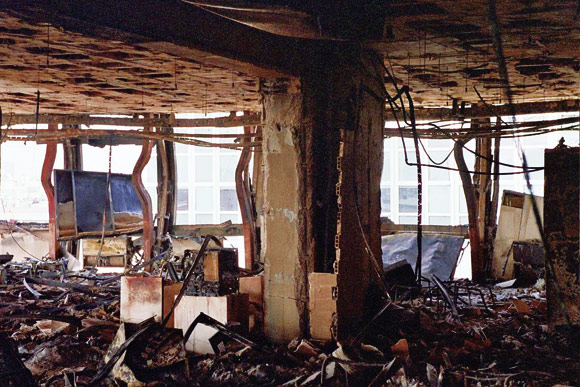 Dr Roger Pope analyses the Spanish report into the causes of the Windsor building fire in Madrid. Unprotected steel mullions were not the sole cause of the collapse, he suggests.

On 12 February 2005, fire broke out in the 30 storey Windsor Building in Madrid. This building was constructed using a concrete core, internal concrete columns, RC waffle slab floors and steel perimeter mullion columns. The mullions had originally been left unprotected although the dangers of this had been recognised and a refurbishment programme was in progress, in part with the objective of rectifying this issue. The fire took place, however, before this could be completed. 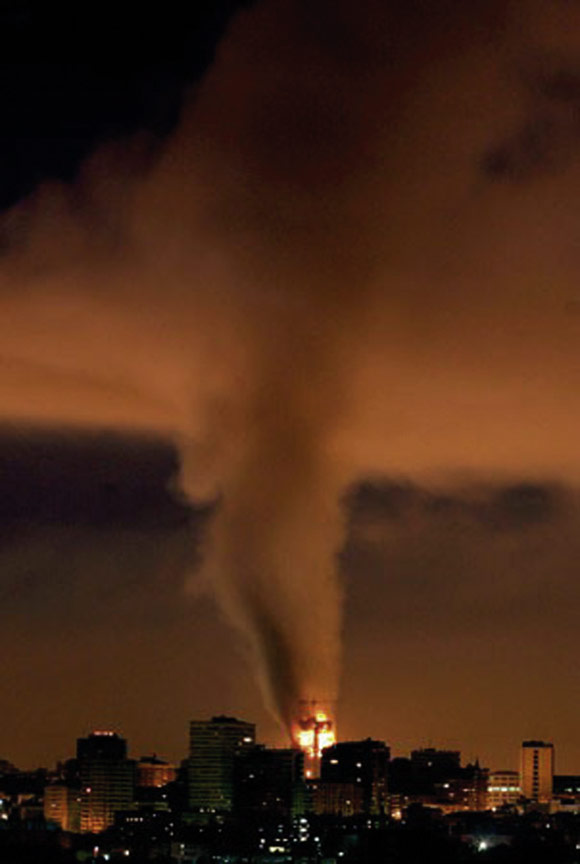 The Windsor Building engulfed in fire 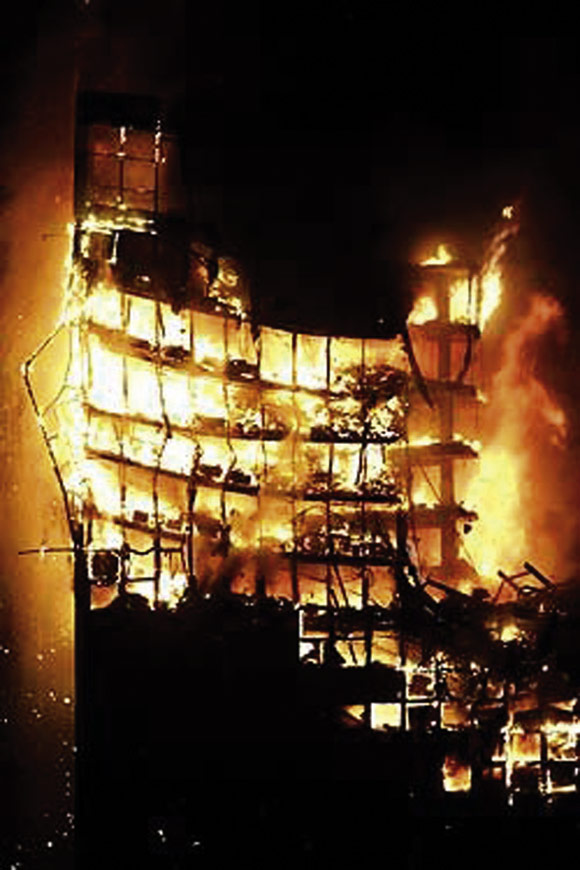 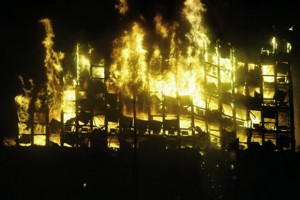 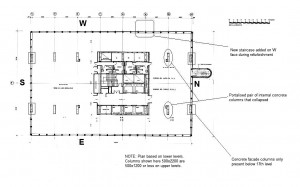 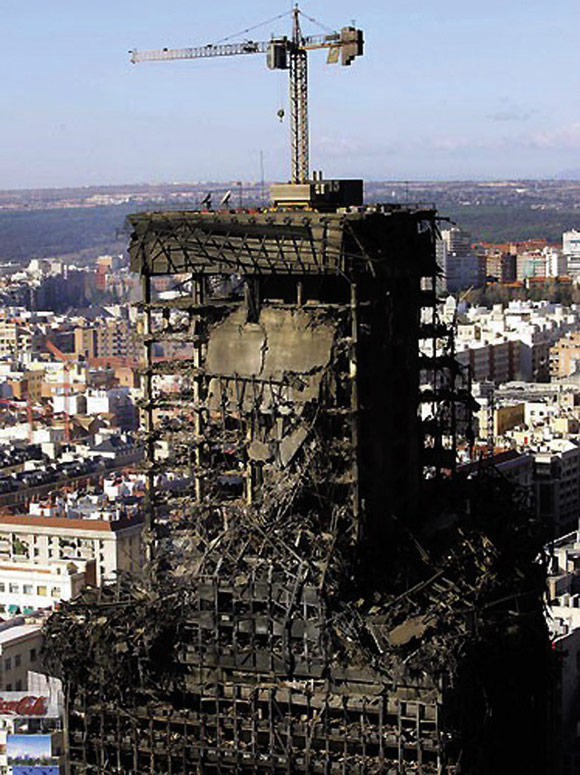 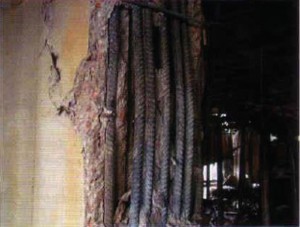 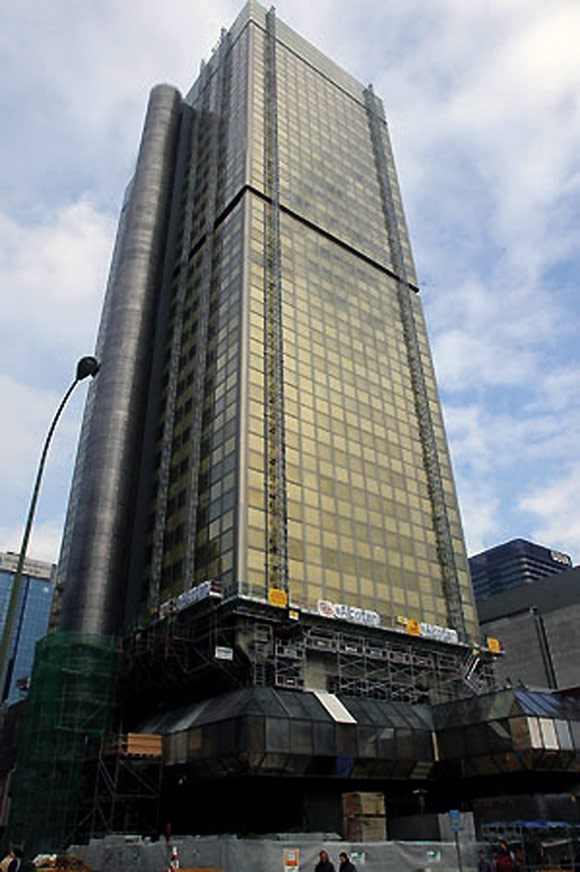 The Windsor Building being refurbished

A view has previously been expressed that the collapses were caused by failure of perimeter steel mullion columns which were directly exposed to fire and this has been  contrasted unfavourably with the perception that the concrete structure performed extraordinarily well.

Now that a report has been published  by the Spanish authorities(1) it is possible to see that the situation is not as simple as the view expressed above. This article reviews some the information contained in this report and develops one important hypothesis.

First it must be made absolutely clear that the steel mullion columns should have had applied fire protection. Reference to BS 5950-8(2) or the Eurocodes would confirm this as they were relatively light load bearing multi-storey columns with high section factors (A/V between 100 and 200 m-¹).

In the course of refurbishment, fire protection had already been applied to these mullion columns on all levels below the 17th with the exception of the 9th. None of the fire protected mullions failed and the Spanish report concludes that, although it cannot be stated with absolute certainty, the collapse of the upper storeys would not have occurred had this fire protection already been in place throughout.

That is the end of the report’s specific conclusions about the contribution of the steel mullions to the collapse. If you do not protect light steel members they will fail in a prolonged fire. Hardly rocket science!

However, it is interesting to see what happened on the 9th level. The picture shows that the unprotected steel mullions buckled as they were restrained against thermal expansion. But collapse did not ensue. Why? The answer is that the loads were taken by multiple alternative load paths – a classic robustness provision. Mullions above from level 10 to 17 and below from level 8 down were able to distribute and share the loads as the 9th level mullions failed. The fact that there were 60 mullions per floor level added to the number of alternative load paths available.

Why was it that although these alternative load paths existed above the 17th level they did not apparently prevent the collapses? There are two answers to this – firstly because there was no effective fire compartmentation of the building; secondly because of the failure of two internal concrete columns. Yes, a portalised pair of 1200 x 500 concrete columns did collapse.

The fire started on the 21st floor level. As shown in the picture taken from the east after the fire, the serviced storey between 16th and 17th levels arrested all the progressive collapse that occurred to the upper superstructure. Such “strong floors” in multi-storey buildings are another classic robustness provision.

The fire eventually raged over nearly every floor from the 5th upwards. It spread both up and down the building as there was no effective fire stopping between floor levels which were meant to act as compartment boundaries. This seems to be due to the fact that the fire stops had been removed during the refurbishment process. Yet many levels of the building were still in daily use – luckily the fire occurred at night! As should be well known, the need for proper fire protection measures starts during construction and does not cease during refurbishment. Lack of effective compartmentation is a classic weakness in fire.

Had each floor provided effective fire compartmentation then even unprotected mullions on floors above and below would have retained their capacity to redistribute loads as occurred around the 9th level. Compartmentation is, in effect, providing fire protection to all parts of the structure outside that where the fire originates, and, as insurers will say, compartmentation is a key to limiting the scale of damage from a fire.

However, the lack of compartmentation meant that the fire raged over several floors at once. Below the 17th level the fire protected mullions could still provide alternative load paths. Above that level, weakening of the unprotected mullions over more than one adjacent level simultaneously meant that the alternative load paths were far more widely distributed and placed much more demand on the concrete floor slabs to redistribute the loads. Once a slab failed on one level in one area, the added tensions above and collapsing debris loads below led to progressive failure of several storeys until arrested by the strong floor. This is what happened at the southern end of the building.

The simple conclusion expressed in the report is that the failure of the portalised concrete columns resulted from the debris loading and progressive load shedding described above. But did it? It should be noted that the columns that failed were at the northern end of the building and the similar pair of columns at the southern end were robust enough not to collapse when the surrounding floor plates suffered progressive collapse. Furthermore, load shedding reduces the load on upper columns and does not increase it on lower columns other than by debris impact effects.

The difference may be due to the fact that the fire started at the northern end and had been raging seriously for about 1¾ hours when the collapse occurred. The next clue is what happened at level 8. The picture shows a column with extensive spalling, buckling of the exposed reinforcement and fracture of the containment stirrups. Restrained thermal expansion can explain these observed effects from heating of the column. This column was 2200 x 500 with 52 no 32mm dia rebars and loss of the capacity of the end seven bars would not be critical.

Above the 17th level the columns were a maximum of 1200 x 500 with far fewer rebars concentrated close to each 500 wide end face. It is not difficult to see that restrained thermal expansion from extended exposure to heat could reduce the capacity of such a column very significantly. It appears to be a reasonable hypothesis to say that at the northern end this could be enough to reduce the capacity critically such that, even allowing for safety factors and material over-strength, the weakened concrete columns were no longer strong enough to withstand the load shed onto them from the weakened mullions together with any whole frame expansion effects.

The final clue supporting this conclusion is in this picture of the east façade as the northern end collapses. Whilst much of the façade glazing has gone, the steel mullion columns are intact. It seems that a “soft storey” is the reason why collapse is taking place at the right hand (northern) end, with intact floors above dropping as an integral assembly. If so, it was only load shedding at the floor where the concrete columns failed that mattered together with loss of column capacity from prolonged exposure to the fire at that level. Had the steel mullions been properly fire protected, the multiple load paths they provided would almost certainly have helped redistribute the loads shed by internal concrete columns weakened by the fire.

Finally, the assessment in the report condemned the remaining structure in a way that has wide implications for re-instatement of concrete structures in comparison with fire-damaged steelwork(3). The report states that concrete exposed to fires in excess of 500°C will heat up such that temperatures within a surface layer will exceed 200°C. When this happens differential expansion eventually causes failure of the bond between concrete and reinforcement. It goes on to show that in the Madrid fire this critical temperature was reached to a depth of 100mm over more than half the floors and columns, and concludes that the risk of damage to reinforcement-concrete bonds due to the intense heat was inadmissibly high throughout the structure, with the exception of a few individual members on the 5th storey.

In other words, independent of whether the steel mullions were fire protected or not, everywhere the fire spread the concrete was then condemned. Thus, whilst the steel and concrete materials regain nearly all their strength on cooling, the two components are no longer able to act as reinforced concrete. Widespread exposure to fire such as that experienced by the concrete elements of the Windsor Building would thus mean that so much of the structure would be condemned that re-instatement would be impractical.

So what are the major lessons from Madrid?

(1) INTEMAC Report NIT 2-05, December 2005 “Fire in the Windsor building, Madrid. Survey of the fire resistance and residual bearing capacity of the structure after the fire”
(2) BS 5950-8: 2003 Structural use of steelwork in building – Code of practice for fire resistant design
(3) SCI Publication P-113, June 1991 “Investigation of Broadgate Phase 8 fire”