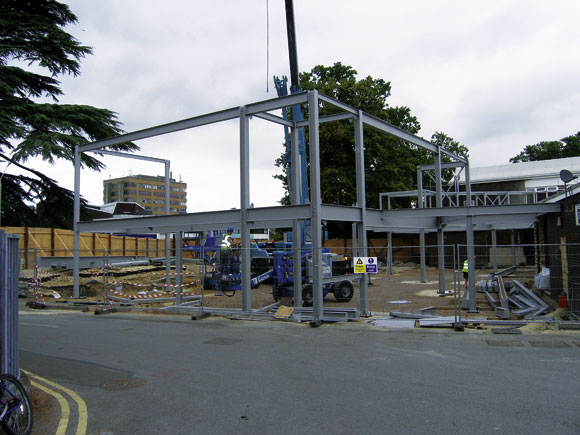 The new Students’ Union building was erected in one week

This year the University of Reading marks its 80th anniversary, and coinciding with this milestone it has embarked on a redevelopment scheme which will see a number of new extensions and buildings taking shape over the next couple of years.

Steelwork contractor James Bros (Hamworthy) has an involvement with all three structures, working with main contractor Warings. The first scheme to get under way earlier this year was the two-storey extension to the Sports Hall.

The steelwork was erected by a three-man gang in just one week. “This structure pretty much sums up why a smallish contractor like us can do a job like this professionally,” Mr Pryke says.

“In the method statement it stipulated there should be no interaction between our workers and students using the existing parts of the Sports Hall,” Mr Pryke explains. “So we utilised a father and two sons team that we’ve employed before on a number of similarly sensitive projects.”

Another aspect of the project has been the need for flexibility, as once the steel frame was erected the wall separating the old and new parts of the complex needed to be partly demolished which required supporting steelwork to be inserted.

“This part of the project changed once we’d finished the frame,” Mr Pryke explains. “Instead of the entire wall only a portion is to be knocked down now, so we need to go back and erect one supporting column in two separate pieces.”

“Luckily we’re already on site doing another structure so we can send our gang over easily to finish the job, but I reckon many larger contractors wouldn’t react so quickly and positively to these little changes,” he adds.

The Sports Hall extension has a footprint of 16m x 11m and will house additional changing rooms on the ground floor and administration offices on the upper level.

The second steel structure to be erected was the extension to the Students’ Union block. The steel for this building was erected in September, again in one week and by the same family gang.

The structure covers the footprint of a demolished building and will link into the old adjoining Student’s Union facility. James Bros. used approximately 45t of steel for this two-level building which is 30m-long x 18.5m wide. Column sizes were mostly the same as the Sports Hall with 203 UCs being used, while beams were predominantly 406 and 356 UBs.

Finally, at the end of October steelwork began on the third part of the job; the Student Services Centre which has been named the Carrington Building in honour of the Rt Hon. Lord Carrington, Chancellor of the University since 1992.

“This is basically a stick and beam job and we envisage completing the steelwork and decking in about five weeks,” Mr Pryke says. “Ideally we’ll be using the same team again as our client and the University have got to know them for their good professional approach and manner.”

The Student Services Centre will house a disability office, accommodation, student financial support office as well as a careers advisory desk. It is due to open in time for the 2007 Autumn term.