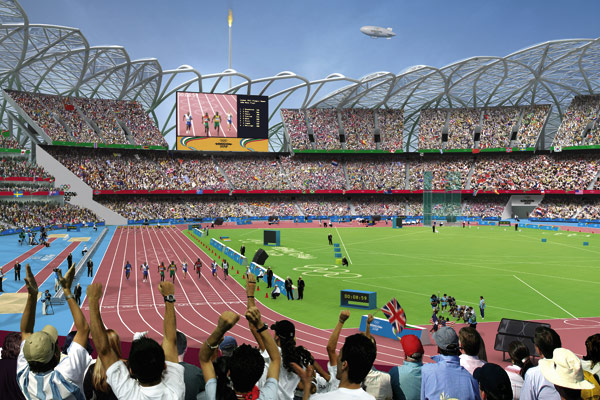 Steel will play a leading role in the construction of venues for the 2012 London Olympics, particularly as many of the venues will be designed to be demountable after the games.

Plans to allow some of the facilities to be reduced in scale or re-used elsewhere was thought to be a factor in London prevailing over rival bids.

Facilities for previous Olympics have been criticised for becoming under-used white elephants after the events.

Steel construction lends itself readily to the design and construction of lightweight structures which can be dismantled, transported and rebuilt.

Many of the new venues are designed so that they can be partly or completely dismantled. The top tiers of seating of the main 80,000 seat Olympic stadium will be removable for re-erection elsewhere, leaving a stadium of around 20,000 ot 25,000 capacity.

The steel-framed aquatics centre will contain two demountable water polo pools, leaving two 50m pools and a diving pool and allowing the building to be used as a 3,500 seat competition venue alongside a leisure facility.

Two of the four multi-sport arenas for fencing, modern pentathlon, volleyball, handball and basketball, with 10,000 to 15,000 capacity, will be lightweight steel-framed structures capable of being taken down and re-erected elsewhere in the UK.

Speaking at the British Constructional Steelwork Association annual lunch the week after the announcement that London’s bid had won, Association for Consultancy and Engineering chairman Desmond Scott said: “Our industry must now rise to the challenge of delivering the infrastructure and facilities needed to make the 2012 Olympics the best the world has ever seen.”

Winning the Games could be “a real boost” to the industry, he said, calling on all sections to come together to map out a strategy for building the necessary infrastructure on time.

“Construction, despite the bad press it sometimes receives, usually does deliver. But make no mistake, we will be watched by the world on this one and we must come up with the goods.”