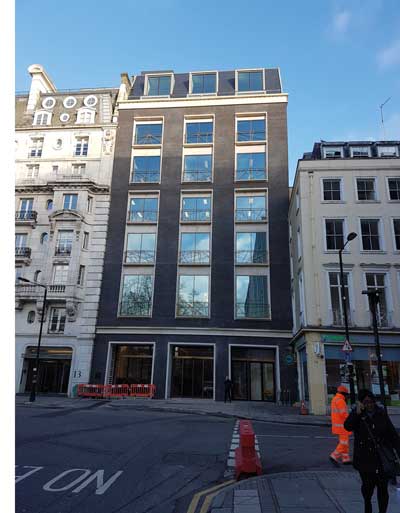 Providing 4,500m² of office accommodation and 1,400m² of retail space, the eight-storey 11-12 Hanover Square project in London’s West End has been completed.

Working on behalf of McLaren Construction, BHC erected 950t of structural steelwork for the prestigious job that has façades along Oxford Street as well as Hanover Square (see NSC Feb 2016).

The building’s basement, ground and first floor levels are split in half, with the area nearest Oxford Street dedicated to retail, with the other half of these floors, facing Hanover Square, occupied by a plant room (basement) and a ground floor entrance lobby for the offices.

From second floor up to seventh floor level, the building is solely commercial office space with the sixth floor benefiting from having a roof garden overlooking Oxford Street offering breakout space for tenants.

McLaren began work on the site during November 2014 with the demolition of the existing buildings. The basement was then deepened and a retaining wall installed along with piled foundations.