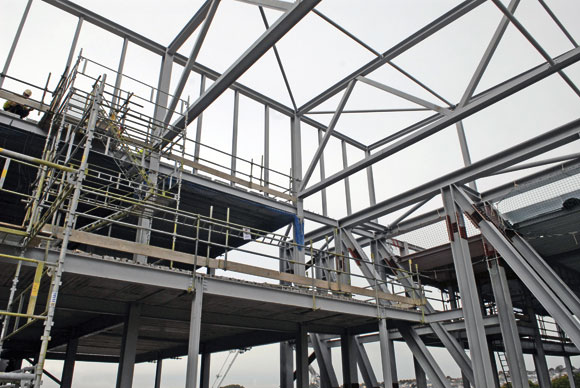 The central spine provides the stability for the entire building

A steel frame was the only viable solution at the Plymouth Life Centre where long spans abound. Martin Cooper reports from the South West’s biggest ever sport and leisure investment.

When it comes to constructing indoor sporting complexes with their necessary long span column free halls, steel has proven to be the natural choice for designers. Its speed and ease of construction are also seen as vital, especially on confined sites with little or no storage space for large pieces of equipment generally associated with concrete works.

Steelwork is fabricated offsite and can be delivered in large pre-assembled pieces ready to be immediately erected. If large long span trusses are needed, then these too can be brought to site in large completed sections, which are then assembled into the complete trusses before being lifted into place.

These criteria have all come to the fore on the Plymouth Life Centre project, currently being constructed on site adjacent to Plymouth Argyle Football Club’s stadium. The project consists of one large structure which is compartmentalised into five main sports halls, all of which require large open column free spaces. To slightly complicate matters, one of the halls is below ground level with another large hall directly above it. The site is also extremely tight with limited space for materials storage as it is surrounded by the Football Club’s car park, a Park & Ride facility and the city’s largest urban park – which can not be encroached upon. 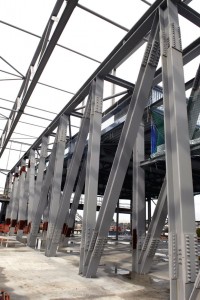 “When it comes to constructing buildings with long spans up to 40m long, which is what we have here, then steel is the obvious option,” comments Nils Clemmetsen, Arup Project Engineer. “We also wanted a relatively straightforward and simple design – one which lent itself to a quick construction programme – and again steel was the right choice.”

Steelwork for this £46.5M project started in June and SIAC Tetbury Steel will complete the programme before Christmas. Prior to steel starting, main contractor Balfour Beatty had completed the groundworks, which included digging out the area for a below ground level bowls hall and constructing concrete retaining walls (see box story, p24).

Constructing the steel roof over this subterranean sports hall was the first part of the steelwork package. Supported by a retaining wall at one end and steel columns on the inside elevation, a large 42m long x 10m high x 2.5m wide transfer truss was erected in three pieces using two temporary support structures sitting on the lower ground concrete slab. Steel for the truss was erected around the temporary works which were then de-rigged once the truss was in position.

“Once this truss was up, the rest of the steelwork springs off of it,” explains Mark Fox, SIAC Tetbury Steel Project Manager.

This truss spans the bowls hall at midpoint and the remainder of the roof was then formed by a series of 1m deep × 22m-long plate girders spanning out from the bottom boom on either side of the truss. Precast planks with a structural topping were then installed on top of these girders to form the floor of a 12-court multi-use sports hall. The truss also forms a ground floor level dividing wall between the sports hall and its adjacent changing room area.

“After we’d completed the steelwork over the bowling alley – forming the desired column free 40m x 40m area – we then erected the project’s central spine, leaving the follow-on trades to work on the roof of the bowling alley,” adds Mr Fox.

The spine is a two story office and changing room block that runs the length of the Life Centre, effectively dividing it in two zones. Water sports (swimming and diving) are housed in one side, and sports such as climbing, basketball, badminton and of course bowling are on the other side. 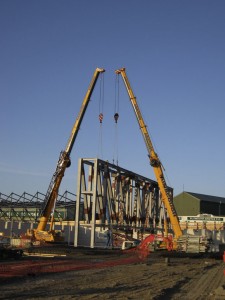 Structurally the spine performs an essential service, as stability for the whole Life Centre is derived from this block, which is cross braced throughout. Finding uninterrupted areas for the bracing was not too difficult as this internal block has no windows along either of its elevations.

Sequencing has been extremely important on this project as space is at a premium. Once steelwork on one area has been completed it has been handed over immediately to other trades. While SIAC Tetbury were completing the spine structure, the structural screed was being installed above the bowls hall. Once this was completed, SIAC Tetbury was then able to revert back to erecting the frame of the sports hall.

A total of ten 42m-long trusses form the roof of the sports hall and these were brought to site in halves. Once on site they were tied together with tubular bracing and erected with the aid of two mobile cranes. This half of the Life Centre (the Dry Zone) was completed with the erection of a 17m-high climbing block. This will contain a 15m-high wall used as an aerial assault course, abseiling area and for bouldering.

From this month onwards (November) steelwork erection will have progressed onto the pool are, on the opposite side of the central spine. Prior to steel going up, the three pools will have been formed, which means much of the steelwork will be erected by mobile cranes positioned outside of the structure’s footprint.

Forming the roof over the main pool hall, which contains a 50m pool and a leisure pool, are three tubular box trusses. Weighing close to 24t each, the trusses will be brought to site in three 14m long sections, assembled on the ground and complete unit lifted into place by a 250t capacity crane.

“As the perimeter columns are erected we will lose available space for our steelwork and the crane, so the trusses will be brought to site and erected immediately as there won’t be any room for storage,” says Mr Fox.

The roof of the pool area is a hybrid timber and steel structure, with glulam purlins spanning between the steel trusses. The glulams will have pre-fitted steel end connections and SIAC Tetbury will erect them along with the steelwork.

This side of the structure’s shape is dictated by the higher diving pool hall, which has a roof that is a maximum of 10m higher than the pool hall. A higher roof was needed to house the diving platform and to accommodate this change in roof height, another 42m-long truss will be positioned at the roof changeover point. The 10m deep truss will pick up the gables of the lower pool roof and the adjacent higher pool roof. 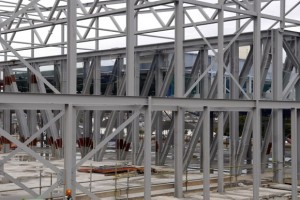 The greater space constraints on this side of the project will mean the pool trusses will arrive on site pre-painted. This is because gaining access to the erected trusses above the pools will be extremely difficult, as previously stated, plant equipment can not stand on the pools concrete slabs, so painting erected steelwork would be extremely difficult.

Another steel element of the pool area is a bank of terracing – precast planks supported by steel rakers – which extends along the inside elevation of the pool hall. Access to this viewing area is from a mezzanine level, positioned directly above.

Summing up, Jim McGee, Balfour Beatty Senior Project Manager says: “This is a 100% public funded landmark project for Plymouth. The city as well as the South West region needs the sporting facilities the Life Centre will provide and once open it could also host national events, putting Plymouth on the sporting map.” 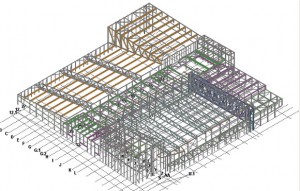 The overall project footprint for the Plymouth Life Centre is constrained by the adjacent football ground’s car park and the City’s largest urban greenspace, Central Park. One of the structural challenges for the design team was how to accommodate all of the sporting facilities within this footprint.

The Life Centre is effectively divided into wet and dry zones. The wet zone contains a 10 lane 50m swimming pool, a smaller leisure pool with flumes and a diving area containing a 10m-high platform. The dry zone has a climbing facility with a 16m high wall; a multi-purpose sports hall suitable for badminton, five-a-side football, basketball, netball and other sports; a 150 station fitness suite; and a seven lane indoor bowls centre.

“There wasn’t enough ground floor space for the bowling alley, so we had to integrate it beneath the sports hall,” explains Nils Clemmetsen of Arup. “For access reasons, especially as many of the competitors are likely to be elderly, it was the best solution compared to the only alternative of putting it above the hall.”