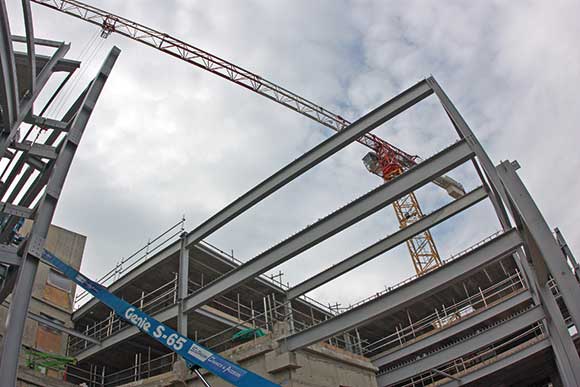 Design work came to the fore for a new steel-framed car park located on a tight site in Fareham town centre.

As part of the redevelopment of Fareham’s town centre shopping mall, Britannia Construction is constructing a new three-level steel framed multi-storey car park. With 209 spaces, the car park sits above two levels of retail and will serve a new 9,753m² mall extension.

The car park has a footprint of 66m x 45m and required 450t of structural steelwork. This was erected in a 20 week programme by steelwork contractor Conder Structures’ specialist subcontractor Jamor Cladding & Construction. 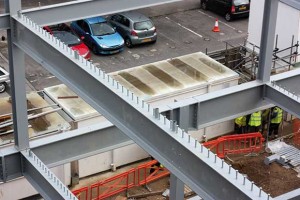 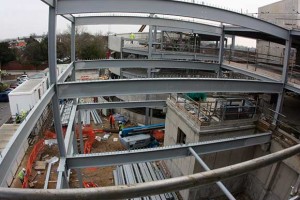 Stability is provided by concrete cores

Prior to steelwork being erected a 16 week demolition programme of an existing car park and shops had been completed by Britannia Construction. As the new build is an extension to an existing shopping mall some foundations were already in place which could not be removed. These were mass concrete and a decision was taken to install more of the same for the new retail area and car park.

“The site constraints then dictated the use of steel for the car park,” explains Dalijit Matharu, P.L Ross Project Engineer. “A high allowable bearing pressure of 250kN/m² would allow the use of pad foundations. Piling was to be avoided if possible as this increased the build programme and costs – so that ruled out a reinforced concrete frame, while using other alternatives to steel would have made the loadings too heavy on the pad foundations.  The compromise was a reinforced concrete box for the retail units with precast planks on steelwork for the car park decks.”

Unusually, both of the ramps have been designed differently as Mr Matharu explains: “Initially both ramps were designed as rigid frames to provide an unrestricted view. However, during a value engineering exercise it was decided the ramps would have braced frames.”

“However, this worked on the eastern ramp as it is founded solely on pad foundations, but the western ramp shares a transfer structure with the adjacent new shopping mall extension.”

A braced frame here would have overloaded the transfer structure, and as the mall was already in an advanced stage of construction, a redesign was out of the question.

So while the eastern ramp is pin jointed on a braced frame using simple connections, the western ramp has a rigid frame with moment connections, which required a great deal of care in steelwork design and erection, as tolerances were very tight. The western ramp’s columns are grounded on the roof of the new concrete mall extension and detailing was based around steel to concrete connections.

Each of the ramps is an independent structure, with movement joints separating them from the main car park building. “The ramps are not tied to the car park as restraining could have had an adverse effect, if there was any movement in the main frame,” adds Mr Matharu, explaining the decision to isolate the ramp drums.

Having straight ramps for entering and exiting the car park would have been the easiest design option, but as the site doesn’t have the space, a circular drum configuration has been used with the ramps having an incline of 4.8 degrees minimum to a maximum of 6.1 degrees.

The site’s confined nature ultimately dictated how the car park was erected, with the west ramp erected first, followed by the main structure. “We had to work west to east because of site access,” explains Conder Structures’ Regional Manager Eddie Harper. “If we hadn’t erected the east ramp last we would have penned ourselves in and deliveries of steel wouldn’t have been easily erected.”

Steel was mostly erected with the on site tower crane, although the initial ramp was built using a 50t capacity mobile unit.

Once the initial ramp structure was up the steelwork erection sequence for the main frame basically followed a three bay sequence. “Three bays of steelwork were erected to the full height of the structure. We then in-filled with wall panels and floor planks, before moving on to the next section,” adds Mr Harper.

The main frame’s columns are 305 x 305 x 97 UKC sections and these sections are 15m high (full height of the building) along one elevation, while 12m sections were used where the car park sits on the existing mall’s podium.

Positioning of the columns was also a design chalenge to the team. The overall car park grid pattern is not regular. The building steps back 4m on the upper two levels, so as not to interfere with an adjacent glass atrium belonging to the existing shopping mall.

“In order to set out the columns so that they don’t obstruct parking spaces, we ended up with the irregular grid,” explains Mr Matharu.

Floor beams used on all three levels are all 610 x 229 x 133 sections and these are all pre-cambered 15m long members. The camber provides rainwater run offs, with the high point set at 133mm, measured on the top of the screed. 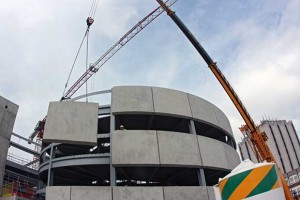 Stability for the car park is provided by concrete cores, with temporary tubular vertical and plan bracing for stability of the long beams during placing of the precast planks.

As part of its steelwork package, Conder erected the precast parapet units, curved on the ramps and straight in the car park. These are fixed at deck level and to a RHS spanning between columns at the top of the parapet level using T-bolts into Halfen channels. This required careful lining up and use of a set installation process as the concrete wall panels blocked access to the bolts.

The front (northern elevation) of the car park has a pedestrian passageway beneath it and 250mm box sections have been used as perimeter beams, for architectural effect.

The new car park and retail extension is scheduled to open this summer.