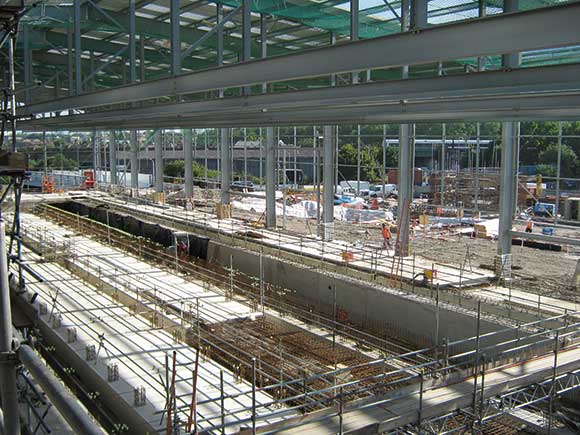 The MFB under construction

Steelwork design has played an important role in the construction of a traincare maintenance depot for east London’s new overground railway line.

The East London line extension and upgrade forms an important cornerstone of Transport for London’s (TfL) £10bn investment programme and will also play a major role transporting people to and from the 2012 Olympic Games.

The former underground line will become part of the capital’s overground rail system and it is being extended north from Shoreditch to Highbury & Islington as well as south from New Cross to Crystal Palace and West Croydon. The new line is scheduled to open in its entirety in May 2011. 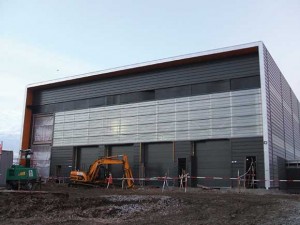 As part of the overall £363m rail contract awarded to the Balfour Beatty Carillion joint venture, a new traincare maintenance depot is being constructed at New Cross.

The project involves the construction of two main steel-framed buildings, along with a group of ancilliary structures. The largest structure measuring 105m long with 37m spans and a 10m clearance, known as the Maintenance Facility Building (MFB), consists of a maintenance hall with inspection pits and a bogie jack road, associated stores and workshops served by gantry cranes, plus 4,500m2 of associated depot management offices and welfare rooms.

Another building, known as the Wheel Lathe Heavy Clean building (WLHC), is a large hall with a rail track over an underfloor wheel lathe and another hall with a track for heavy manual jet washing of trains. This structure contains an upper level of staff accommodation, a control room, offices and locker room/welfare and messing facilities.

For the MFB, in particular, there was a design requirement for a large column free area and consequently the structure has been built as a portal frame shed to span four incoming rail lines. Three of these rail tracks have maintenance inspection pits beneath them.

As well as spanning the works area, the overhead steelwork also had to be rigid enough to support a series of gantry cranes. The steelwork also incorporates intermediate support columns along the western elevation. These columns support a three-storey office block which has staff accommodation, meeting rooms, a boardroom and locker/welfare/mess facilities.

Having worked on similar projects, Eric Hills, Acanthus LW Architects’ Director, says that given the constraints of this project a steel portal frame seemed the most viable solution. 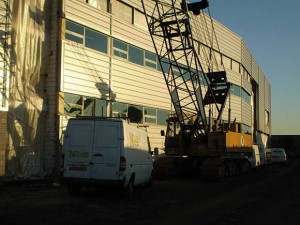 “We worked on a similar project in Northampton with the same design team,” he says. “Steel worked well on that job, so we took a similar approach with this project.”

Steelwork contractor Caunton Engineering designed the steelwork for the New Cross traincare facility, and erected a total of 710t of steel.

The steelwork programme was spread over a year to allow coordination and sequencing with other trades, Caunton made a number of return visits. One of these was to erect the MFB’s way beams and internal gantries.

The site was very confined with plenty of other construction activities taking place simultaneously, so with space at a premium, Caunton erected most of the steelwork with one 50t capacity crane. This worked well,” says Mr Griffiths. “But we did have to use an 80-tonner to land the concrete planks for the three-storey office.”

Coordinating and checking the steelwork design, Tony Gee & Partners (TGP), also designed the MFB and WLHC building substructures. TGP Project Engineer, Martin Allnutt, says both buildings are founded on piled foundations due to the existing made ground and tight tolerances on differential and total settlement. “The heavy train lifting jacks in the MFB and the wheel lathe in the WLHC building are both very sensitive to vertical deflection of the substructure.”

Meanwhile, the steel superstructure also had to be rigid enough to support the MFB’s hoists and its storage area’s gantry crane. 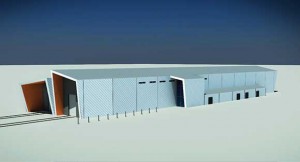 The WLHC building contains two halls, one for maintenance and one for jet washing of trains

The second large structure, the WLHC building, was erected in a similar manner, with most of the substructure complete before steelwork began. The building measures 90m x 22m with a 7.5m height clearance. This is another steel portal frame with an internal blockwork partition running down the centre. This partition acts as a fire wall and also divides the building into its wheel lathe maintenance area and the jet washing facility.

The WLHC’s steelwork frame also incorporates intermediate columns along one elevation to support a single-storey office block above the wash hall. This upper level also contains a control room, accommodation space and offices. Approximately 130t of steel was used for the wheel lathe area with a further 35t for the carriage wash and upper office level.

Summing up the successful steelwork programme, Mr Griffiths, says: “We had to meet several milestone dates along the way, all of which were completed on time.”

The New Cross traincare facility is scheduled for completion by the end of 2009.