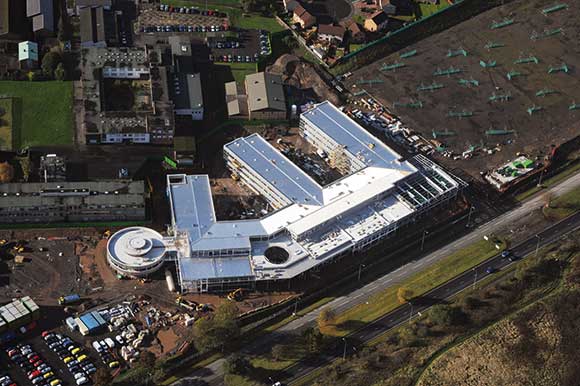 Designing a new school in central Scotland with a steel frame has provided the facility with an innovative oratory structure and classrooms of differing sizes. Martin Cooper reports.

The regeneration of Britain’s educational establishments continues to move along at a steady pace. A raft of government, as well as privately financed, schemes are currently on going, while another tranche of projects, covering most regions of the UK, is in the offing. 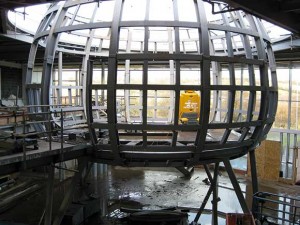 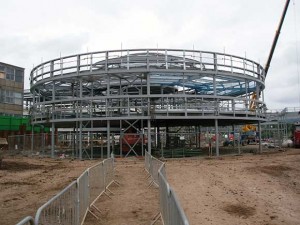 The majority of the school buildings are three storey structures 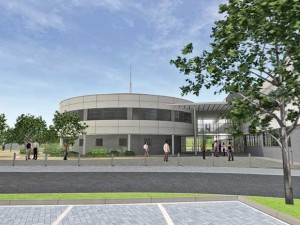 Currently under construction, the new and innovative St Peter the Apostle High School is a replacement for two local schools, St Columba which is situated adjacent to the construction site, and the nearby St Andrew’s School. Once St Peter is completed in time for the 2009 autumn term, St Columba will be vacated and demolished allowing work on St Eunan’s Primary School to begin on that footprint.

Work on St Peter began in early 2008 and the initial programme included re-siting the play area for St Columba and the erection of secure fencing and hoarding to protect the pupils from the construction site. The new school is being built on former playing fields and part of BAM’s contract includes landscaping and preparing new sports pitches on a previously vacant lot next to the school.

The new St Peter school building is a steel framed structure with a maximum of three levels and covering a plan area of approximately 7,446m². The main part of the structure comprises double height gym and games facilities, an egg-shaped oratory and corridor access to the three teaching block fingers which protrude southwards from the main building. On the eastern end of the building there is an attached rotunda, which will house the school’s administrative offices.

The main steelwork contractor for the project was Bone Steel who erected approximately 950t of hot rolled structural steelwork for the main frame in just 12 weeks.

Bone Steel Project Manager Rodger Meldrum, says this tight timescale was the main challenge for his company. “The site team are very committed and organised and this enabled us to complete our erection programme on schedule.”

The steel erection programme was divided into nine phases, and this allowed Bone to work in a sequential manner with deliveries easily divided into erectable loads.

“BAM had all access routes to the site well laid out and this allowed us to work easily within the tight schedule,” adds Mr Meldrum. “We had two squads on site for most of the job and they completed the work, sometimes working 10 hour days, but without needing to work at weekends.”

Each of the three teaching blocks will house a different faculty – languages, humanities and science – and all three structures are bespoke. “Each block has a unique grid pattern because of the need for varying classroom sizes based on their designated use,” explains BAM Design Project Engineer Chris Packer. “Furthermore individual classes within each teaching block also differ in size.”

The irregular and constantly changing steel grid pattern didn’t pose a problem to Bone’s steel erectors as Mr Meldrum says, once the groundworkers had the setting out bolts in place, the steelwork went up easily. Although the grid changes, the teaching blocks are based around 5m to 6m patterns.

Once the three-storey teaching blocks had been completed the next phases involved the main block and the attached administrative rotunda. The two steel erection gangs began in the middle of the main block and both worked outwards in opposite directions.

The main connecting block features a number of double height spaces, including gym and sports hall areas and the main entrance and connecting passageways.

“With the amount of two-storey feature columns, the irregular grid pattern as well as the tight timescale of the project, a steel frame was the obvious choice of material,” explains Mr Packer. The steel frame superstructure was designed by BAM Design using CSC Fastrak Building Designer with the modelling being done in Revit Structure.

Because the school does not feature any concrete cores all of the structural stability is derived from steel cross bracing, which has been secreted along classroom partition walls and internal corridors. This principle of replacing concrete cores/shear walls with localised steel bracing has been increasingly promoted by BAM Design due to significant savings that can be made in terms of programme and cost.

The main school block includes three gyms, a dance studio and one large games hall. All of these facilities are double height and feature spans of up to 17m. The steel roof members for these areas were the longest sections of steelwork to be erected on site, but as the sports facilities have no plant rooms or class rooms above them, just roof, no heavy sections were needed.

Situated in the middle of the school’s main block, between the assembly hall and one of the gyms, is one of the project’s most unusual elements – an egg-shaped oratory. Supported on four sets of twin spindle legs, the oratory’s shape has been formed by a series of rigid steel ribs which all connect to a grillage beneath the floor, which in turn are connected together by horizontal steel ring members.

The oratory is intended to be a religious contemplative area for students and will be able to seat up to 55 people. The steelwork for this unusual structure was part of a secondary steel package and was erected once the main frame was completed.

This unusual structure was erected by first forming a table with the legs using a composite concrete slab base for its raised floor. This then allowed the ribs and steel ring members to be constructed around this platform in a sequential order. The oratory also features a flat sloping glazed roof, which protrudes through a circular hole in the school’s main roof. Around this opening the oratory’s ribs are tied back into the main steel frame.

The oratory will be partially glazed and internal school lighting will highlight this feature which will be visible through the main building’s large windows.

“This is one of the project’s highlights and central features,” explains Bam Design Structural Engineer Mohammad Ziauddin. “Although the steel structure is very complex both in terms of design and detailing, it has been fabricated and erected without any significant issues and achieving a remarkable degree of tolerance. It’s a good example of how cutting edge 3D modelling and design software technology can be utilised and effectively integrated between both designer and fabricator.”