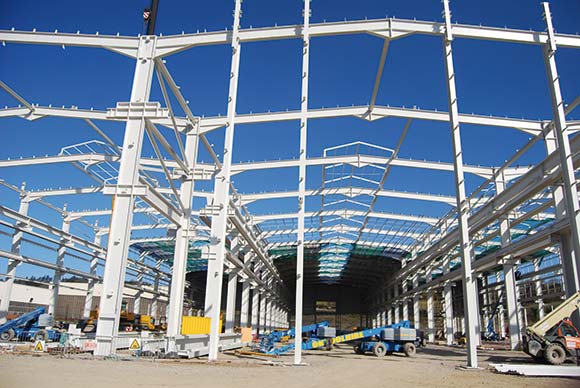 Each span accommodates a double row of crane beams

Since 1958 the German engineering company Liebherr has been manufacturing cranes at its Killarney facility in the south west of Ireland.

Employing more than 600 people, it has become an essential cog in the local economy and the firm is believed to be the longest established multinational in the Republic of Ireland.

Innovation and development are the lifeblood of any successful company and Liebherr is no exception. In order to stay ahead of the game and remain competitive the company has decided that it must increase capacity and to facilitate this a new 16,500m2 production building will be completed this summer.

Work on the project started last year on a plot that is adjacent to an existing fabrication hall. Most of the site’s footprint was formerly part of a golf course and early works included levelling the ground, dewatering and installing pad foundations with sockets for portal columns.

Fabrication of the steelwork commenced at SIAC Butlers Steel’s workshop in Portarlington in late October 2012 and, in order to facilitate the tight construction schedule, was completed within 12 weeks.

The erection of the main steel frame of the building began in January, and saw 3,000t of structural steelwork lifted and bolted into place in just 11 weeks by SIAC Butlers Steel.

“The first week of the steel erection programme was virtually wiped out due to the windy weather,” says Cathal Healy, Walls Construction Project Manager. “However, SIAC worked extremely diligently and made up for the lost time, completing the steelwork on schedule.”

“This is a large open plan production facility constructed along similar lines to a distribution warehouse, the difference however is the frame needs to accommodate large internal working cranes,” explains Mr Healy. “A steel frame is the best solution for this type of structure.”

Constructed in 12m bays, the steel frames’ columns weigh in at a hefty 11t each, except the ends of the structure where columns, weighing 16t each were required. These heavier sections provide sway stability to the portal frame building.

The heavy column sections are required to resist crane loadings and limit deflection at eaves to acceptable levels. The columns are founded in 1.6m deep sockets, which were later infilled with concrete and each socket sits on a pad foundation measuring 7m × 6m × 1,200mm deep. 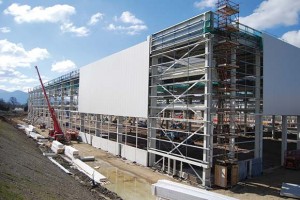 The facility is 168m long

This methodology of using column sockets is the usual way Liebherr factories are constructed all over the world. The project design team also utilised this technique as a way of increasing efficiency.

“This method gives the structural frame a partial moment connection at the base, a similar connection using a pin or holding down bolts would have required much larger steel members and connection sizes,” says Peter Brunner of Brunner Consulting Engineers.

Each of the three portal spans has to support an overhead gantry crane, with the mid span having a 100t crane capacity and the outer spans having 90t capacities. Adding to the loading exerted on the steel frame, each span also has to support wall travelling cranes.

“Deflection on the frame was very stringent and we had to consider 117 different load cases, both for wind and crane movements,” explains Mr Brunner. “In order to guarantee the cranes would all run smoothly and correctly within the completed building, tolerances for the columns and the crane beams were extremely tight.”

To ensure the crane beams were correctly aligned they were initially installed so that adjustments could be made.

“In each portal span one side of the crane beams was not welded up during erection, but left pinned and adjustable,” explains Tony Callanan, SIAC Butlers Steel Contract Manager. “Once the frame was completed we checked alignment prior to site welding the sides of the track beams.”

Steel deliveries to site were undertaken everyday and varied in size from 21t up to a maximum of 40t. SIAC Butlers Steel erected three loads a day as the piece count for the job was fairly low, consisting mainly of large heavy sections.

The majority of the steel frame was erected using a solitary 120t capacity mobile crane, with a smaller 60t machine used as a back-up unit for lifting tie beams and infilling the roof.

The main roof rafters were brought to site in 16m lengths and then bolted into 32m sections on the ground before being lifted into place.

Before steelwork erection was completed in April, the cladding contractors had already started on site, ensuring the project completes on time. To match the existing production facilities, the new structure will have precast walls up to a height of 2.5m, with a combination of polycarbonate glazing and Kingspan cladding above, and a composite roof, incorporating roof lights.

The new Liebherr production hall is scheduled to be fully up and running later this summer, ensuring the company maintains its highly visible presence in Killarney and giving the local economy a timely boost.