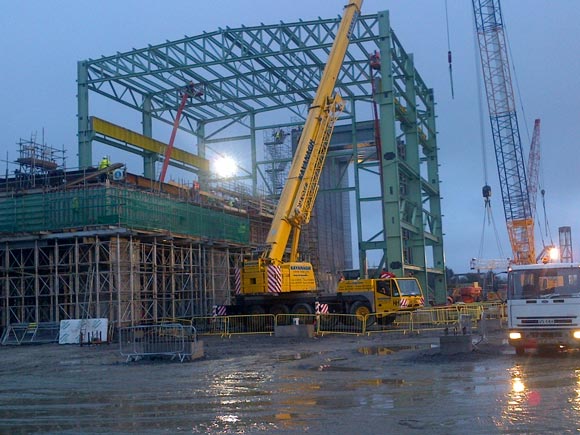 Inclement weather has not hindered the construction project

A power station under construction at Great Island County Wexford will provide electricity to approximately 220,000 houses in south eastern Ireland.

One of the largest building projects currently under way in the Republic of Ireland is the construction of a replacement 460MW combined cycle gas turbine (CCGT) power station located adjacent to the confluence of the River Suir and River Barrow near Waterford..

CCGT power generation is said to be the most energy efficient and cleanest method of fossil fuel generation. It involves burning natural gas, which turns a gas turbine with the heat generated used to power a steam turbine.

Structural steelwork is playing a leading role in the construction of the project’s turbine building and electrical building, as they need to be large open column free spaces, in order to accommodate large pieces of generating equipment. 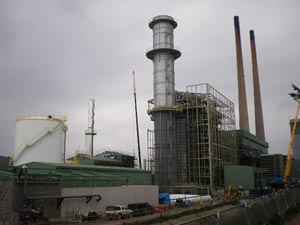 One of the steel frames supports a flue 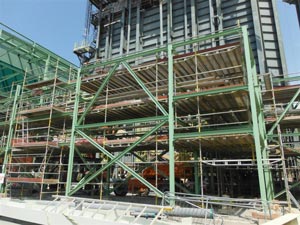 The steelwork for the turbine hall was completed around equipment installation 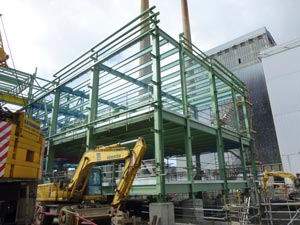 The electrical building being erected 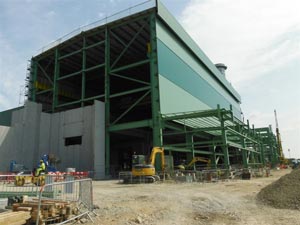 Cladding systems are installed to the turbine hall

Both of these two main structures are founded on reinforced shallow pad foundations, while deep piled foundations have been used for the other structures due to poor ground conditions.

“The choice of steel as the main framing material is based on both economy and versatility,” says Santiago Paje, Initec Energia Chief Designer for Civil Engineering.

Long span economic structures were required for this job and steelwork provided the solution. Steelwork’s flexibility also came to the fore as the design developed even after the erection started.

“Steel has the ability to be quickly and economically erected with large spans which can absorb big loads. Steel frames are also versatile enough to be continually redesigned, which is what happened on this project as the frame design was altered and modified while it was being constructed,” adds Mr Paje.

The inherent flexibility of bolted structural steelwork has been key to the design of the turbine building. Mr Paje says this will allow certain bays of the steelwork frame to be removed if large pieces of equipment need to be removed and replaced.

Standing 25m high the turbine building is the largest building on the site and has been formed with a series of fabricated columns.

“Each of the columns weighs in excess of 9t as they also support crane beams running the length of the structure,” explains John Kiernan of Kiernan Structural Steel. “Consequently these plate columns have large 40mm flanges and 60mm thick baseplates that have full penetration butt welds.”

To accept the crane beams the columns have welded stubs at a height of 22m. The crane beams measure 1,400mm deep × 400mm wide and were brought to site in 13.5m lengths, which corresponds with the width of the building’s bays.

The columns also support 29m long roof trusses, which in turn create the large open column free space needed for the turbine hall. The 3m deep trusses were brought to site in two pieces (one 10m long section and one 20m long section), bolted together on the ground before being lifted into place as a complete unit.

The turbine building has been designed as a portalised frame with the addition of bracing in some bays. Fixed supports were required in both directions as wind and crane loads are expected be very substantial.

Inside the turbine building there is an internal mezzanine level running alongside three elevations while a lean-to storage structure is attached to two façades of the building.

“When we erected the turbine hall we had to leave out one gable end section so the turbines could be installed,” says Mr Kiernan. “Only after this large scale mechanical equipment installation operation had been completed could we finish erecting the final parts of the turbine hall’s frame.”

Prior to in-filling the gable end of the turbine hall and while the turbines were being installed Kiernan Structural Steel erected the electrical building and various other smaller buildings and pipe racks located around the site.

“It’s been a very challenging project,” sums up Mr Kiernan. “We’ve had to schedule our deliveries and erection programme, including working night shifts, in order to accommodate a number of other trades and professions. Access and space around the site was very confined and challenging.”

The Great Island power plant is due to be commissioned later this year. 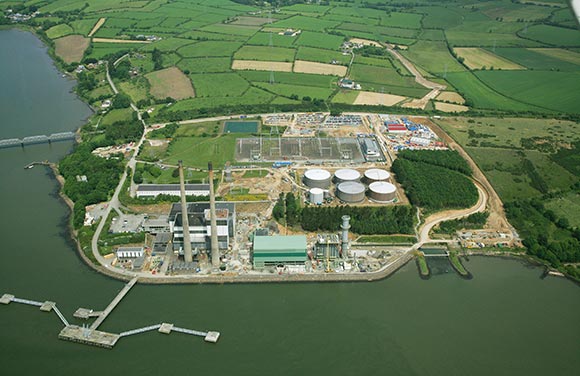 The project has included improvements to the site’s waterfront defences