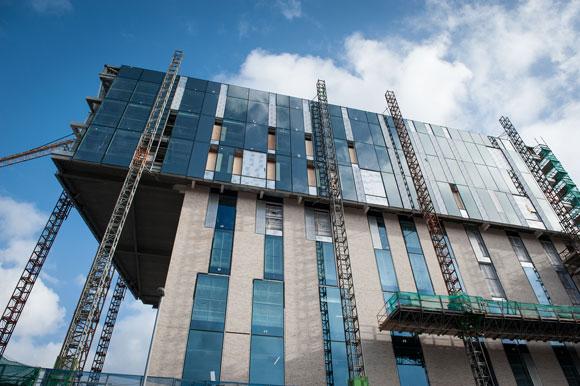 The building is topped by a feature cantilevering three-storey lantern

Structural steelwork is playing a pivotal role in the construction of Phase one of Ulster University’s new city centre campus.

By 2018 the university will have completed its £250M project with three new buildings providing 73,000m² of academic space in Belfast’s Scotch and Cathedral Quarter – an important emerging cultural district.

Project architect Fielden Clegg Bradley Studios’ vision for the scheme envisages the new campus stitching into the historic fabric of the city to combine social, retail and flexible learning spaces around new and enhanced streets and squares.

Aiming to achieve a BREEAM ‘Excellent’ rating the buildings will house six faculties positioned one next to another in order to spark creative debate and innovation between disciplines.

Explaining the reason behind the relocation, Ulster University Acting Vice Chancellor Professor Adair says: “The Jordanstown campus no longer meets our sustainability and carbon footprint targets so we are relocating to exemplar buildings.”

“The new campus buildings will act as a catalyst for regeneration, as well as reaching out to the community by being inclusive with public thoroughfares and amenities.”

The initial structure to be built is known as Block B and straddles the busy intersection of Great Patrick Street and York Street. It recently topped out and is due to open this September. It is being built next to the university’s existing Belfast School of Architecture, which is currently known as Block 82, although it will be renamed Block A to fit into the overall development programme. 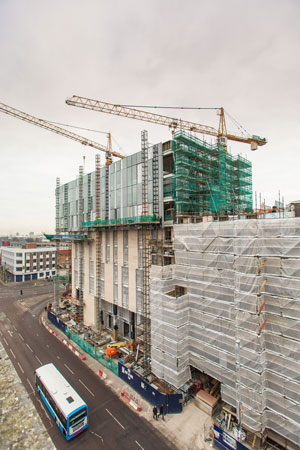 Block B occupies a plot on a prominent intersection

Aiming to achieve a BREEAM ‘Excellent’ rating, Block B is an eight-storey steel-framed compositely designed building which will house the University’s School of Art Design and the Built Environment.

A steel frame best suited the needs for this project as it is a utilitarian building incorporating a number of flexible teaching spaces,” explains Mott MacDonald Project Engineer Derek Burnside.

Block B is split into a five-storey base that reflects the heights along York Street and adjacent Block 82, and topped with a cantilevering three-level studio box/lantern.

The protruding upper space is said to reflect the new and emerging architecture that is starting to adorn Belfast’s cityscape, while at the same time harking back to the Victorian turrets and towers that many prominent street corners once had.

The cantilevering lantern will house the University’s sculpture, painting and design studios. A three-storey void at one end of the lantern will accommodate an exhibition area for student’s work.

Although the cantilevering three-storey lantern was the last element of the steel frame to be erected by steelwork contractor Walter Watson, it involved the most challenging part of the erection programme.

The upper three floors cantilever out by 1.5m at both the front and rear elevations, while the eastern elevation overhangs by 10.5m at one end and by 4.5m at the other end forming a wedge shape.

To form the lantern, storey-high trusses positioned at roof level have been erected – a 10.5m-long and a 4.5m-long truss at each end of the structure with a 7.5m-long truss located half way between the two. The eighth floor is within the trusses’ depth, while the two floors below (6th and 7th) are hung from the trusses.

The trusses had to be installed in erectable sections, while the upper floors were temporarily braced. As the three cantilevering floors are hung and supported from the trusses, the temporary steel was only removed when the floors were complete and stability guaranteed.

The aim of providing adaptable and flexible 21st Century teaching spaces throughout the building is evident on all floors of Block B.

Most of the structure’s teaching floors can be reconfigured with ease, thereby creating areas suitable for specific needs.

The lower floors of Block B will accommodate a two-level library on the ground and first floors, computing suites, a student hub housing more adaptable teaching spaces, printworks, a sculpture department with kilns as well as woodwork and metal workshops.

Floors two, three and four of the building will connect into the existing Block 82. These mid-levels combine workshop, studio and office space for the Faculty of the Built Environment.

Although it connects into and is adjacent to an existing building, Block B is a structurally independent steel-framed building. It has been erected around a typical grid pattern of 9.75m × 6m with the steel frame getting its stability from concrete lift and stair cores.

“Beams connect to the cores via shear connectors and as part of our steel package we were responsible for the coring and fixing of these connectors,” explains Walter Watson General Manager Structural Division Trevor Irvine.

“Overall this was a very challenging site for us as the building’s footprint takes up almost the entire site. We have existing buildings on two sides and busy main roads on the other two sides, so bringing materials to site was difficult and had to be done on a just-in-time basis,” sums up Mr Irvine. 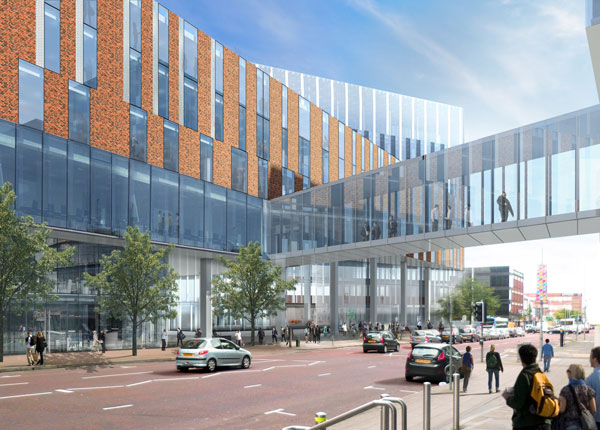 Phase two of Ulster University’s campus is about to kick off on an adjacent plot and consists of two more new buildings (Blocks C and D).

The two buildings will have eleven and eight storeys respectively and house the Centre for Sustainable Technologies, lecture theatres, exhibition space, eateries and wide circulation routes, many of which will be accessible to the general public.

A steel footbridge, spanning York Street, will be erected to connect Phase two with Block B.