Bowled over by steel 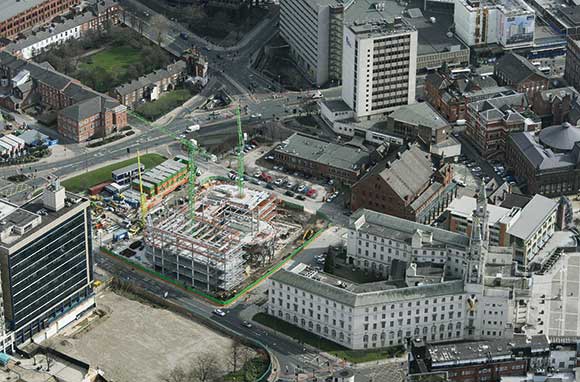 Leeds is a city on the move. Like many of the UK’s former manufacturing giants, it is reinventing itself with a host of developments, including commercial, residential and hotels, currently under construction.

One of the most striking developments is known as the Rose Bowl, a new home for the Business and Law Faculty of Leeds Metropolitan University.

Situated opposite Leeds Civic Hall, in the heart of the city’s Civic Quarter, the main U-shaped building wraps around a distinctive glazed bowl structure which protrudes from the front. Supported on a series of Y-shaped columns, the Rose Bowl will house the faculty’s lecture theatres and provides the establishment with a signature frontage.

Describing the job, architectural practice Sheppard Robson says its design has responded to the University’s aspirations and the development integrates it with a wider context of its location, and orientates the campus towards Leeds city centre, improving the University’s status.

Very much at the heart of the project, the Rose Bowl lecture theatre ‘pod’ will contain one 250-seat theatre, two 140-seat and four 60-seat theatres.
As well as having a highly unusual bowl-like
shape, which also tapers out as it gets higher, the structure is clad in distinctive triangulated bolt-fixed reflective glass panels.

As well as a complex steel design, the project has also featured a long preparatory programme. The site, formerly occupied by a car park, was sloping, so much so that when the basement was dug out, one end was excavated to a depth of 11m while the other only needed to be dug to a depth of 8m.

This large muckshifting operation, which began in early 2007, resulted in a flat basement slab which eventually took more than 6 months to cast. The cast in-situ concrete basement also includes a piled retaining wall.

From ground level up the structure is steel framed, and steelwork contractor Fisher Engineering initially started by erecting the outer U-shaped faculty. This part of the project primarily contains offices and classrooms, is four stories high with a plant room on the roof.

“We started by erecting the faculty building up to third floor and then the Rose Bowl to the same level,” explains Barry Craig, Fisher Engineering Project Manager. “We were then able to use the third floor slab to run our cherrypickers on for the steelwork erection of the upper levels.”

Logistically, the steel erection programme was very challenging as the site is extremely tight, surrounded by busy roads on three sides and the Civic Hall on the eastern elevation.

Consequently, there was little or no room for setting down of steel deliveries. Steel was delivered to site in a ‘just in time’ sequence.

The above ground superstructure was always going to be steel for its speed of construction,” comments Simon Sutcliffe, BAM Construction Project Manager. “The design certainly lent itself to steel, especially the ‘pod’ theatre structure, as well as the need for long spans in the office block.”

Clear spans of 15m are a constant feature of the office block on every floor. “The nature of the occupants means there will be lots of services,” comments Mr Sutcliffe. “So cellular beams are used throughout to maximise the 3.9m floor to ceiling heights.”

The office block has an approximate length of 60m along its back elevation, and 45m length along the two protruding finger wings. The construction process for this part of the programme was mostly traditional ‘stick and beam’ using the two on site tower cranes and bringing in a mobile crane when needed.

“These four columns were tied in and formed a central braced core, with temporary props in place, the steel was then erected off these large members,” adds Mr Craig.

The ring of Y-columns needed a 100t mobile crane, as each of these columns, which were brought to site as complete pieces, weighed around 5.5t.

“We started with the Y-column at the 12 O’Clock position,” explains Mr Craig. “Holding this in position with a crane, we then erected an adjacent column with another crane and tied them together with a beam.”

Once the first two columns were up Fisher was then able to complete the entire ring of columns, by tying them into adjacent members.

This series of Y-shaped feature columns are connected to a horizontal truss, or steel diagrid, which goes around the circular structure. A series of these diagrids form the bowl shape which is fully glazed.

The node points on each diagrid has a total of six beams connecting to each other. “Accuracy was key for this part of the steel fabrication, because if one node was out the entire ‘pod’ wouldn’t have fitted together,” sums up Mr Craig. 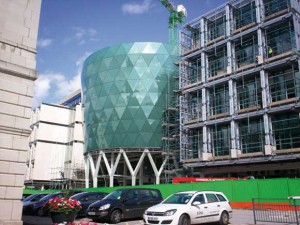 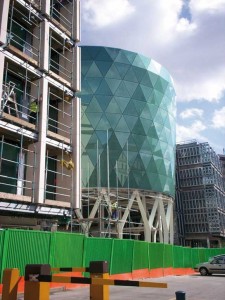 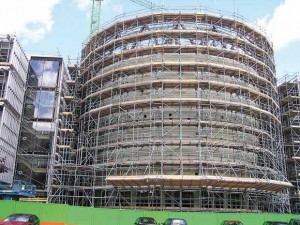 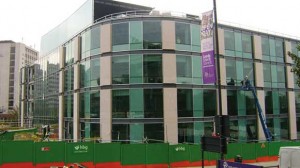 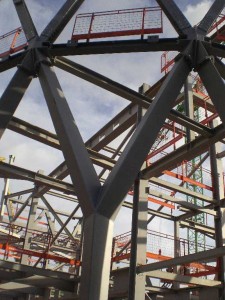 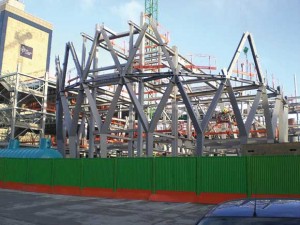