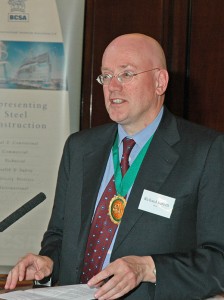 Richard Barrett speaking at the AGM 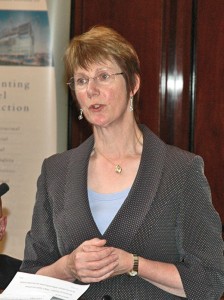 Sarah Buck speaking at the AGM

Mr Barrett said the latest independent report showed steel’s market share at an all time record high of 70%. Output in 2007 was a record 1,462,000 tonnes, a 3.2% rise on 2006. The sector faced a challenging period against the background of the global credit crunch that was affecting confidence, but demand would remain steady this year although a decrease of 5% was expected in 2009.

Mr Barrett said BCSA was confident that as a result of lobbying of government national standards for structural design would be retained well beyond 2010. Consulting engineers intend to continue using British Standard’s for the foreseeable future. A programme of work has been put in place to inform and educate members about these new standards and BCSA was working with Corus and the SCI on a series of new design guides for the Eurocodes.

Mr Barrett advised BCSA members to become familiar with BS EN 1090-2 and to make the appropriate changes to their Factory Production control systems and Welding Quality Management systems in readiness for CE Marking.  The Steel Construction Certification Scheme (SCCS) is able to provide a ‘gap analysis’ to enable members to identify what they need to do in terms of changes to their existing procedures and to meet the new requirements to enable them to CE mark.

Mr Barrett concluded: “I am pleased to report that BCSA is in good shape and looks forward to the future with confidence.“

Guest speaker Sarah Buck, President of the Institution of Structural Engineers, said there were many similarities between the BCSA and the Institution of Structural Engineers, one being the challenge of a skills shortage and image problem.  One new initiative the IStructE has is the Technical grade of membership, which obviates the old requirement to have a Master’s degree to join as any grade of member.  This would open up those employees of the BCSA members who do not have such degrees, to be able to join the Institution if they so wished, Ms Buck said.

The construction industry has an image problem, described by Sarah Buck as. “Male, Pale and Stale”.  She urged all those in the industry to help address that perception and turn that around, and for those that think they as individuals can do nothing about this, to think again.