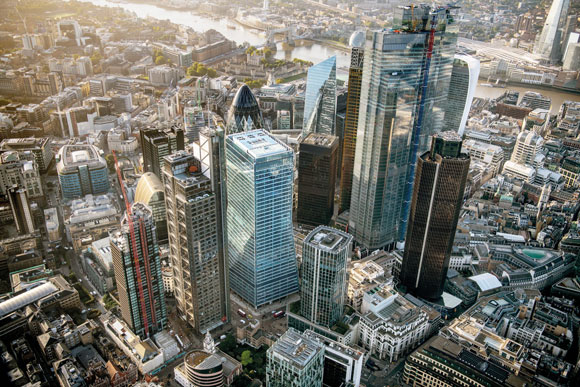 The immediate future for commercial buildings looks challenging as the economy emerges from the pandemic-enforced lockdown. Nick Barrett says that the adaptability, circular economy and health and safety benefits of steel could heighten its attractions as the framing material of choice for this important sector.

The outlook was reasonably bright for commercial developers on the eve of the world heading into the hugely disruptive COVID-19 pandemic. Although there were a few voices reminding us that good times don’t last forever, and that a correction of some sort was due after years of growth in capital values and yields, the glass looked at least half full.

The amount of new office space under construction in London had hit an all time high earlier this year, with construction started on over five million square feet of office space in the six months to 31 March, according to the Deloitte Crane Survey, as developers took heart from a possible end to Brexit uncertainty. This was 41% higher than the long term average and was 29% up on a year previously. Confidence in the post Brexit London office market was proving to be higher than many had expected.

Since then, the change has been dramatic, with offices having been stripped almost bare of staff under lockdown. Cancellations of projects already underway were thought to be unlikely, but developers were hanging fire on a large number of schemes.

Architects’ confidence has fallen to an all time low according to a RIBA Future Trends Survey in May. Architect workloads were 33% down on the same period a year ago. Some 39% of projects had been put on hold since March and 14% of architects had been placed on furlough.

Architects’ confidence levels and workloads are traditionally bellwethers, but this time the storm arrived with the forecast, thanks to an immediate shut down of many sites. Since then the Construction Products Association and other respectable forecasters have only added to the gloomy outlook.

The big unknown now is what the speed and strength of the post crisis turnaround will be. Forecasters are almost unanimous that there will be no rapid return to previous peaks. The other major unknown is what impact living with the threat of future pandemics and the new vogue for working from home will have on commercial buildings of the future.

Offices exert a strong attraction
The jury is out on what the long term future of the commercial office will be, with various possible trends pulling demand in different directions. Prophets of doom see everybody working at home, and insist that today’s hollowed out offices will be a permanent feature. Others think that the perceived benefits to employers of having staff work from home could be shortlived, outweighed by the inherent attractions and advantages of office life.

Financial services has been a major end user of commercial developments since the 1980’s, especially in London, but if even large funding deals for corporate mergers of some £30 Billion can be managed successfully by homeworkers, as has happened in recent weeks, and equities, bond, foreign exchange and financial derivatives markets can be operated by workers at home during the recent times of market turmoil, then who needs offices?

Younger people in particular are drawn to cities and office environments, to make themselves known to superiors and to meet other like-minded people, forging relationships that support careers and can last working lifetimes. Working in a small bedroom in a shared flat might have only a short-lived novelty factor. Some commentators however are saying that younger people seem to be enjoying the commute-free lifestyle that lockdown has given them.

Those with more experience might fear the ‘out of sight out of mind’ syndrome, and worry about being overlooked by head office while languishing in the backwoods of a suburb or village.

The pull of the office is strong. Some companies are reportedly going to ask staff to spend two or three days in offices and other days working at home. In the short and medium term companies can be expected to ask some staff to stay away from the inner city offices where they are used to congregating, some using satellite premises instead and coming to the main offices only for meetings, training or occasional days. Demand for these satellite spaces may rise.

Many industries, especially financial services, have demands imposed by regulators on being able to demonstrate operational resiliency, so they have always maintained satellite offices for emergency use; these business continuity spaces might not be needed in future if resiliency can be achieved by home working capabilities proven during this pandemic.

Other trends could boost office demand. Those companies that intend to revert to full time office working for all or most staff as soon as possible face challenges that might mean they need more office space than before, at least as long as social distancing requirements stay in force. The trend towards ‘densification’, where more and more people are shoe-horned into less and less space, is likely to have been reversed by the pandemic.

Hot desking might be a thing of the past. Even with staggered shifts the norm, there could be long waits to use lifts – so more lifts might be needed in future buildings. Many of the staff leisure facilities that have been provided by employers in sectors like technology – ping pong tables and gyms for example – could be redundant in a social distancing age.

All the fears and worries could of course evaporate if a vaccine or a range of effective treatments are developed soon, but working from home during lockdown has reportedly given employers pause for thought about how they use their office spaces, and how much of it they need. Developers will respond to that, no doubt with caution at first while there is still a serious recession to contend with, but later by asking designers to come up with solutions appropriate to the new working world.

Steel ideal for a social distancing world
Steel comes into its own against this sort of background as it has proven adaptability and future-proofing characteristics, which can be seen in the completed steel-framed commercial projects in the following pages. This built in adaptability can significantly extend the life of a building as uses change, an obvious circular economy plus.

Social distancing products are becoming available daily, all of which can easily be installed in modern steel-framed buildings. Open-plan spaces may be broken up with easily installed perspex screens. Major services are often integrated within the depth of the floor zone, creating space where additional ventilation can be provided to buildings, as has been suggested might be demanded in future.

New services might have to be designed into new buildings or retrofitted; equipment is already being installed in buildings including thermal imaging screens to detect anyone with an increased temperature. The long spans that steel-framed buildings are renowned for are easily adapted to suit alternative, cellular layouts. Buildings that have used integrated beam construction in particular have total flexibility of layout as the flat soffit means all internal walls can be relocated or taken away, or additional walls added.

And if, as we can still hope, a vaccine is found for COVID-19 or it mutates into something more benign, a steel-framed building can easily be converted back to what it was before, or adapted further to changing uses.

A new focus on healthy workspaces and the environment generally is a likely outcome of the pandemic and steel scores well on all relevant measures. Constructional steelwork is fabricated in factory conditions where social distancing and other measures are easily supervised, and a steel-framed building demands far fewer people on site than alternatives. Sustainability, or circular economy, benefits include steel’s low embodied carbon, and a 100% recyclability that no other construction material can match.