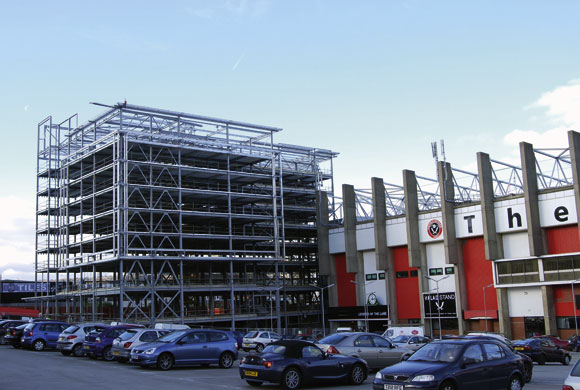 The hotel is situated within the stadium’s car park

Sheffield United FC’s hotel has been partially built over an existing entrance to Bramall Lane stadium. The thoroughfare needed to be kept open to the public during the construction programme and this led to the decision to use steel.

Bramall Lane, the home of Sheffield United Football Club, has seen many changes in its long and illustrious history. The ground has the distinction of being the oldest major stadium in the world still hosting professional matches, with the first football played on the site way back in the 1870s.

The famous city centre stadium started life however as a cricket ground and two sports shared the facilities until the 1970s, when the old pavillion was finally demolished and the outfield built-over to make way for a new stand, finally enclosing the football pitch.

The differing dimensions of cricket and football pitches meant that after building over the pavillion the club inherited a large vacant lot of land behind its new South Stand. This area has been used as the main car park and recently was earmarked for a new stadium development.

The first part of this work is a 158-bedroom four-star hotel which will include executive suites, a fitness centre, restaurant and bars. When complete it will be operated by Millennium & Copthorne and will be one of Sheffield’s largest hotels. 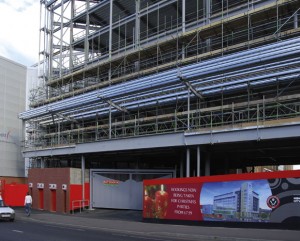 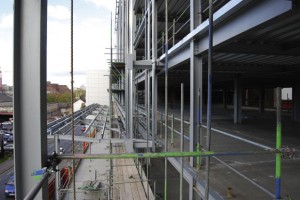 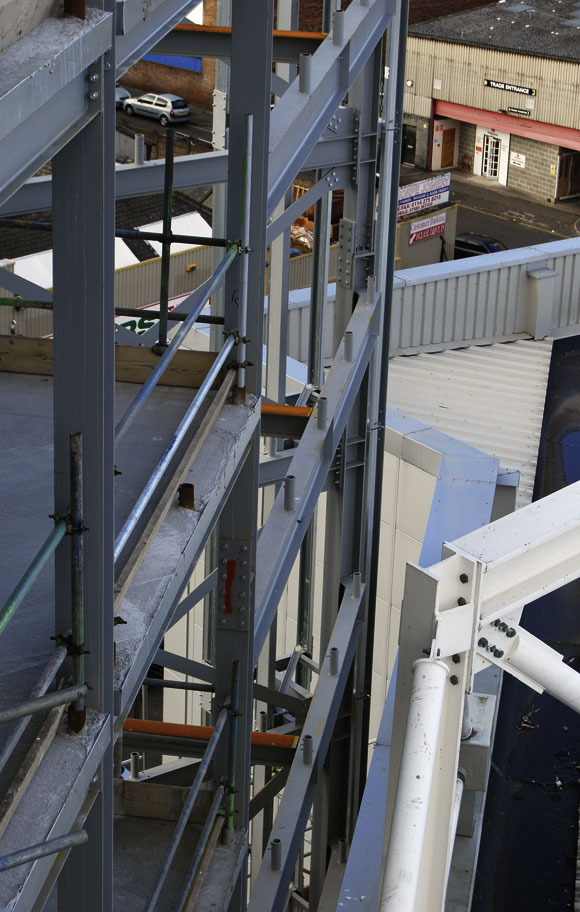 The new structure is located on the corner of Bramall Lane and Cherry Street, and next to – but not adjoining – two of the ground’s stands. This close proximity to the stadium was one of the main reasons why steel was chosen as the main framing material.

Mel Risbin, Director of 3E Consulting Engineers, explains: “There is an existing exit ramp from the stadium and the hotel structure had to be constructed over it partly as a cantilever. Using concrete would have meant extensive temporary propping for two or three months in this area and this would have meant closing the ramp and losing ground capacity. We suggested steel as the best solution.

“It was easier and quicker to design and build this part of the structure in steel. The client was then persuaded to go with the material throughout the project for continuity.”

The challenge was to keep the same grid pattern of 3.9m centres. Mr Risbin adds: “This was achieved towards Bramall Lane with one column piercing the ramp to take the loadings and this member has been boxed in to form an architectural feature.”

Adjacent to the ramp exit there is also a turnstile block which had to be incorporated into the hotel structure’s design. Main contractor GMI had to have this block completed and ready for use by the start of the current football season last August.

The original brick turnstile block was demolished and completely rebuilt during the summer, leaving the steelwork to be erected before the imminent football season.

“We had an initial three week period on site erecting all the steelwork above the turnstiles and the ramp,” explains Elland Steel’s Contracts Manager Mike Hill. “As this section of the hotel abuts and follows the shape of two of the stadium’s stands it has a complex and angled shape, but the erection was still done in the alloted time scale.”

Apart from the turnstile block and the ramp there is little interaction with the stadium next door and construction work has even been able to continue during match days. “It was important to complete the initial corner section over the ramp to allow public access to the stadium,” adds Mr Hill. “Once this was complete we then began an 11 week steelwork programme in late August for the rest of the seven-storey structure.

As the hotel is located in the stadium’s car park, which is in use all week, deliveries to site and plant equipment movements had to be carefully coordinated. It also meant the steel erection was done within the project’s footprint with the aid of one mobile crane and a couple of cherrypickers.

“As we erected steel our available space for the crane and steel storage progressively got smaller,” adds Mr Hill. “Bramall Lane is also a busy major route into the city so we couldn’t put any equipment in the road and had to erect this main facade from within the site’s footprint.”

GMI initially came on site in May and began by leveling the sloping site and digging out the basement level. A concrete slab was then poured and piling was undertaken, which primarily consisted of ground anchors to prevent up-lift.

The structure has a footprint of approximately 700m² and the gridline pattern stays uniform on the upper bedroom levels. The lower levels differ slightly because of the access ramp and the need for larger column free areas for the reception area on the ground floor and a restaurant and gym on the first floor.

Mr Hill says the steel erection was fairly regimented after the first two floors, but there is a feature cantilever at front of the hotel. This is the facade for the gym and has been described as a ‘propped cantilever’.

This architectural facade consists of beams that protrude by 1.5m, supported on main perimeter columns. “Erecting the steelwork above this cantilever from within the project’s footprint was another tricky procedure,” adds Mr Hill. “Ordinarily on a greenfield site this wouldn’t have been so difficult, but on a tight inner city site steel erection is more of a challenge.”

Summing up the design and vision of the project – especially the main facade’s cantilever – Ashley Turner, Partner at WCEC, says the dramatic, modern architectural design of the hotel is strongly modelled to contrast with the flat facades of the existing street scene.

“This development heralds the economic regeneration of this area of Sheffield and will provide a major financial boost for the region. The arrival of the hotel will create a substantial number of jobs.” 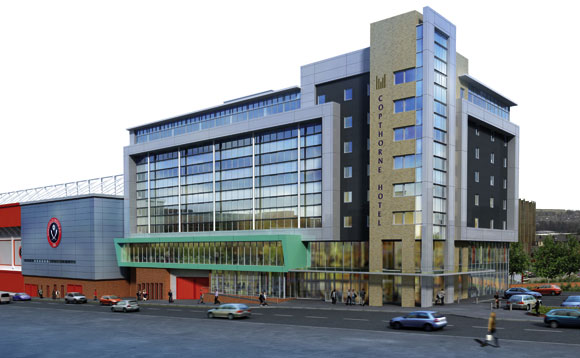 The completed hotel will be one of Sheffield’s largest