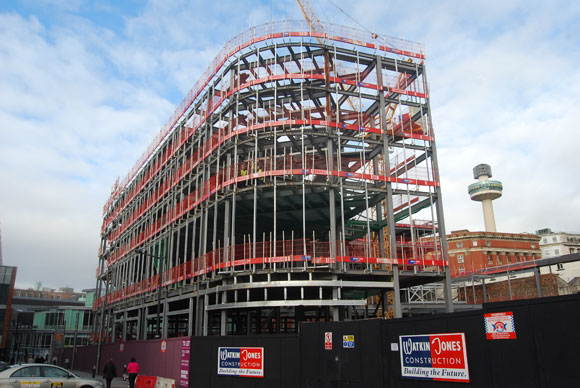 The elevation along Seel Street incorporates a step in the ground floor level.

Construction work on a new hotel in the centre of Liverpool is progressing in quick time due to the choice of structural steelwork for the main frame.

Liverpool has been transformed over the past decade as millions of pounds have been invested in construction projects in the city centre and along the River Mersey’s waterfront. Retail developments as well as leisure and entertainment facilities have been a key success as they have attracted people to the rejuvenated city and helped Liverpool become a visitor destination.

In order to satisfy the increased number of visitors new hotels have been built and one of the latest developments is a new Premier Inn currently being constructed on Hanover Street.

Located at the entrance to the Liverpool One retail development, this will be the third Premier Inn for the city, as the hotel operator already has a presence in the business centre (Vernon Street) and the entertainment area (Albert Dock).

John Bates, Head of Acquisitions for Whitbread Hotels & Restaurants, says: “Premier Inn is the most successful budget hotel operator in the UK and we want to ensure that ongoing success by investing in key locations. By adding a new hotel at Liverpool One, we can be part of this exciting regeneration story.” 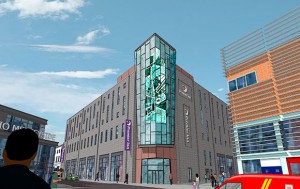 The hotel's entrance will feature an abstract artwork within its glazing.

This latest Premier Inn will offer 183 bedrooms and the development also includes ground level retail units and restaurants. Getting the hotel up and running as fast as possible is a key requirement for the client and the main reason for choosing structural steelwork as the main framing material. A 15-month build programme is scheduled for this project with the hotel due to open this autumn.

“Steel offers a quick construction, as the frame is up fast and this allows the floors to be completed and then other trades can get started,” explains Nick Bumby, Contracts Manager for Watkin Jones.

The site of the project was formerly a car park, but this had already been demolished when Watkin Jones started work last July. With a cleared footprint the early works included installing pad foundations and ground beams, in readiness for the steelwork erection to begin.

Because the site slopes downwards towards the main elevation on Hanover Street, the structure has five levels along two sides but only four on the rear facade. Overall the structure forms a squared horseshoe shape, with the central area used as a covered plant and retail back-of-house zone.

The disparity in floor levels is absorbed into the design of the ground floor retail and restaurant units, where the shops at the front along Hanover Street incorporate a double floor to ceiling height. The units along the sloping Seel Street have a progressively shallower floor to ceiling height the further up the road they are; a step in the ground floor is accommodated by a retaining wall. The restaurants along the rear elevation, consequently have a single level height.

This then means that the hotel, which starts at level 2, consists of four floors on all three elevations.

The majority of the steel frame is based around a regular column grid pattern of 7.2m x 7.7m. With a central corridor and equal sized rooms either side, the design required three lines of columns including the perimeter members, with a central row positioned in the corridor. The exception to this pattern is the ground floor where some of the central columns have been omitted, by including transfer beams, in order to open up the retail areas. 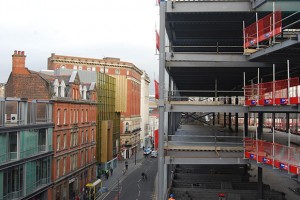 Due to the proximity of busy roads, all steelwork has been erected from inside the project's footbridge.

The steel frame derives its stability via bracing which has been secreted into lift shafts, stairways and partition walls. Each of the wings has to have its own independent stability because of the central void and the lack of linking floorplates.

Steelwork contractor EvadX has erected the steel and installed the precast stairs using the on-site tower crane, a unit which has a 2.8t capacity. Non of the steelwork is too heavy for the crane, although the stairs have been produced off-site with the machine’s capacity in mind.

The final element of the steelwork will be erected this month (February). This is the project’s piece de resistance and will form the hotel’s glazed entrance and the main staircase core.

The design for this part of the job has been ongoing while the rest of the steelwork package got erected. EvadX has left the main corner element of the structure open, so the entrance can be inserted last and bolted to the existing steelwork frame.

The entrance steelwork is a triangular feature which overhangs the adjacent paths and fans-out as it gets higher. Formed from SHS and CHS members, it incorporates its own bracing and will be left exposed behind the glazing as part of the stair core and as the hotel’s feature element. 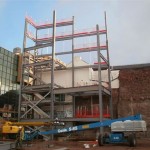 EvadX will deliver the entrance steelwork in a number of small pieces to be bolted together on site and erected by the tower crane. Two members, however, are too long for the crane as in full length they would dangerously overslew the street when being lifted into place. These two 22m and 19m-long tubular columns will be brought to site in halves and then site welded.

“Each of the tubes has a structural insert or connection which allows them to be temporarily tied during erection. Welding them up afterwards ensures full load capacity,” says Mr Morris.

The glazing of the steel entrance structure will form a centrepiece for the project as it will incorporate an abstract artwork within 18 of its glass panes. The art will reflect the area’s ropemaking and nautical heritage with depictions of old industries and maps.

The design and detail of this prominent steel structure was developed with the aid of computer software. Curtins used RAM Structural Systems software to design an economical frame that had the ability to accommodate the dimensional restrictions of featured glazing, finishes and M&E services. During the design development period, in order to provide high quality, visually aesthetic exposed steelwork connections to satisfy the architectural criteria, Curtins with the assistance of Evadx, produced full scale prototypes.

“Advantage was taken of our expertise in Building Information Modeling (BIM) during the tender and construction stage where we generated a 3D model using Revit to integrate the architectural package within the structural model. This accelerated the review and coordination process,” explains Mr Jones.

Summing up, Mr Bumby adds steelwork will be completed this month and the material has helped keep the project, despite the recent windy weather, to its scheduled completion date.