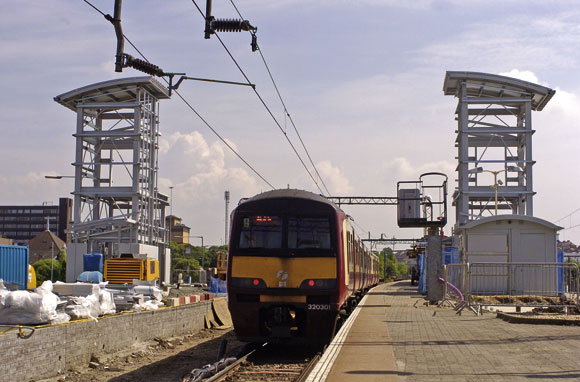 Steelwork was erected around train services at Airdrie station

The size of the UK’s railway network has shrunk considerably since its heyday at the beginning of the 20th Century. Numerous cost saving measures, including the infamous report by Dr Richard Beeching in the 1960s, resulted in branch lines and stations being closed.

Over the last decade this trend has begun to be reserved with stations reopening and lines being reinstated, such as the East London Line extension (see NSC January 2007). Railways and light rail systems are now seen as a viable alternative to road transport and a number of projects are in the offing.

The Airdrie – Bathgate Railway Link is an example of this trend. It will soon reopen, connecting Edinburgh and Glasgow to give Scotland’s two largest cities their third direct rail link.

In 2004, the Scottish Government decided to reopen the line on the recommendations of the Central Scotland Transport Corridor Study. It stated the line would encourage the use of public transport and ease the nearby motorway and road networks. The project received Royal Assent in May 2007, and Network Rail and its team of contractors got the works underway in 2008.

The main works have been divided into four main contracts with Balfour Beatty responsible for new tracks between Airdrie and Bathgate, and also electrifying the whole route between Glasgow and Edinburgh.

During April 2009, Network Rail awarded three further contracts to Carillion, BAM Nuttall and Spencer respectively. Carillion is building the four new stations at Armadale, Blackridge, Caldercruix and Drumgelloch (between Airdrie and Bathgate), as well as carrying out certain ground treatment and filling activities. The new station at Bathgate and the renovated station at Airdrie, as well as bridge and earthworks are to be delivered by BAM Nuttall. Spencer was responsible for developing the light maintenance depot at Bathgate (see box story).

Working on behalf of BAM Nuttall, Cairnhill Structures has been responsible for fabrication and erection of structural steelwork for both Airdrie and Bathgate stations. At Bathgate this has consisted of a footbridge with stairs and lifts, linking the two new platforms. Under a separate contract a 25m x 6m steel framed station building, housing a ticket office and waiting area, has also been erected. 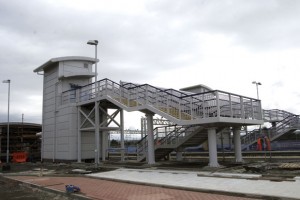 Bathgate’s new station is only 400m east of the existing single platform station. The proximity of a ‘live’ station to the construction site has meant the steelwork was all erected during overnight possessions.

“The footbridge was erected during five separate Saturday night rail possessions,” explains Graham Paterson, BAM Nuttall Site Agent. “Saturday nights are the most popular as we get a longer possession, Midnight until 6am as opposed to Midnight to 5am on other nights.”

This extra hour was particularly important for the lifting of the bridge deck, which was erected in one possession using a 200t capacity mobile crane.

“It took an hour to rig up the crane, and then a further hour to de-rig it,” adds Mr Paterson. “This only left us four hours to get the entire deck into place… which we did.”

Cairnhill delivered the completed 18m-long steel footbridge deck to site in one assembled unit. The aluminium cladding was pre-installed in Carnhill’s fabrication yard, while electrical conduits were also fitted. This meant little or no work was necessary on the deck once it was installed over the ‘live’ rail lines.

The other four possessions were used to install the lift shafts and the stairs which are connected to the bridge deck’s supporting trestles. Again Cairnhill delivered the stairs/trestles as pre-assembled units, speeding up the erection process as well as minimising the required on-site work. The lift shafts were delivered in two sections and bolted together on site.

A similar steelwork package has also been completed at Airdrie, where again Cairnhill has erected a footbridge with lifts shafts and stairs. The only difference being this structure is slightly smaller with a span of 15m.

“Again we used the same methodology,” says Ian Taylor, Cairnhill Estimating Manager. “The steelwork was delivered to site in pre-assembled sections, which minimised the number of rail possessions needed and the amount of on-site work, which was critical as Airdrie is a ‘live’ station.”

Both Airdrie and Bathgate stations are nearing completion and the line is scheduled to open this December. 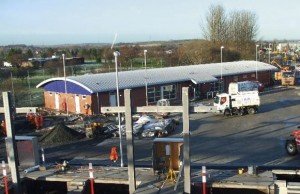 Alight maintenance depot – including a steel framed 1,250m² office, amenity and stores building – has been constructed at Bathgate to serve the new railway line. Completed one month ahead of schedule, by main contractor Spencer, the project was ‘Highly Commended’ in the Best Project – Medium category, at the recent Network Rail Partnership Awards.

A number of sustainable elements were included in the scheme, as the job involved 10,000t of excavation works. All of this material was recycled and transferred as fill to the adjacent station project. Over 3,000t of excavated tarmac was crushed and recycled for use in constructing the depot’s new access road.

Choosing a steel frame for the depot’s office building also proved to be the correct decision as the building was also erected and completed ahead of schedule.