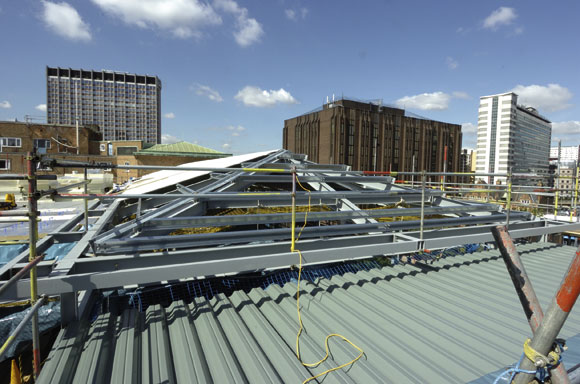 A new entrance hall housed within a glazed rotunda and extra floors added to two existing buildings are just part of the extensive work being undertaken at a south London college.

Croydon College, one of south London’s largest vocational colleges, is currently in the midst of a large remodelling project, a scheme that will keep the establishment at the forefront of training and education, while making widespread use of structural steelwork.

The college currently has two sites – Fairfield Road and Barclay Road – and it is at the former that the work is being undertaken. Consisting of both new build and refurbishment, at the heart of the project is a six-storey glazed rotunda, which will incorporate the new entrance to the College.

The predominantly steel framed rotunda includes a double-height space below ground level, which will house drama studios and music practice rooms. The ground floor will house the entrance hall, while the upper levels will provide light and spacious offices with circulation areas and glazed walkways (linking into the existing adjacent building). 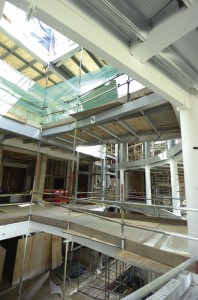 The double-height basement zone is concrete framed and above it there is a concrete transfer structure supporting the steel frame for the upper parts of the rotunda. The perimeter curvature of the rotunda structure was one of the main reasons for choosing a steel frame. Much of the steelwork will remain exposed and consequently aesthetically pleasing CHS sections have been used throughout its semi-circular shape.

“We weren’t allowed to splice these large 406mm diameter CHS columns, as they will remain in full view,” explains Sean Clark, Contract Manager for D A Green & Sons. “So we had to procure them in complete lengths and the majority of them are nearly 20m long.”

Bringing such large steel sections to site was a delivery and manoeuvring challenge, as the site is surrounded by busy roads, and the rotunda’s access is severely restricted by the college’s existing buildings.

Once the steel was on site, the CHS columns and the tight site, dictated the build programme for steelwork contractor D A Green. As the perimeter columns were immediately erected to full height (using temporary restraints), the rest of the rotunda’s steelwork was erected around these sections.

“Once the CHS columns were up our access machines were restricted on the small tight site and could only reach to level three,” adds Mr Burchnall. The basement slab also had a weight restriction which also limited the size of machine that could work on it.

“This meant we had to erect the internal steelwork to third floor level and then allow the concrete contractor to cast the concrete floors,” he adds.

The final two floors were then erected with lightweight cherrypickers working off of the completed concrete slabs.

The rotunda actually features three rows of CHS columns, with the perimeter members being slightly shorter and ending at the fifth level, while the remaining two internal rows extend upwards the full 19.8m to form the top floor and roof. The perimeter columns are shorter as the uppermost part of the structure steps back to form a balcony.

Because of the amount of exposed CHS steelwork and the fact that the perimeter will be fully glazed, the project engineers had to figure out where to put the stability-giving bracing. The perimeter façade was obviously ruled out as cross bracing would have obscured the glazed elevations, while internally there was no space.

The completed rotunda will house a new entrance hall

“All beam to column connections are moment connections in two directions, and these are all secreted within the floor zone,” explains Chris Lyons, Hambleton Partnership Project Engineer. “This was the only solution, so as not to spoil the exposed columns with welded or bolted connections.” 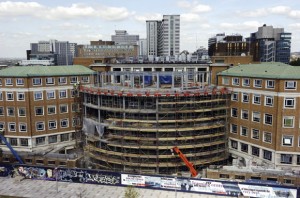 “The rotunda is basically an independent structure, with its own stability – via the moment connections. The lift shafts are the only point where the new steel connects back into the existing building’s steelwork,” explains Mr Lyons.

As well as the rotunda, steelwork has played a major role in another aspect of the college’s redevelopment; the adding of an extra floor to two teaching wings. Both of these wings are identical and situated either side of the college’s library.

Initially the work consisted of the old copper roofs being taken off which then allowed steelwork, to form a new storey, to be erected. This was then completed with the portal frame roof which was clad in copper to match the surrounding college rooftops.

Before this a thorough survey of the existing buildings was undertaken and subsequently it was decided that the new floors had to be as light as possible. Using steel was the answer as connecting new steelwork to the original steel was a relatively straightforward procedure. However the old steel was concrete encased and some of this was stripped away making the old columns lighter, prior to the new frame being added.

“It was necessary to remove some of the concrete encasement to save weight, while the steel frame and portal roof were both of a lightweight design,” adds Mr Lyons.

A timber decking has been used instead of a more traditional concrete floor, again this has minimised the loads being transferred down to the original foundations.

The project is scheduled for completion in February 2011. 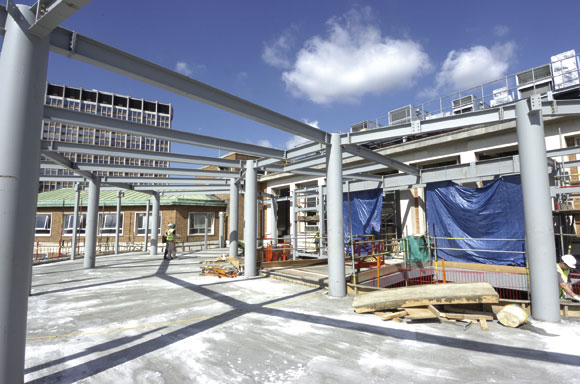