This large industrial structure encompasses all that is good in modern structural design. The 60m span roof trusses at 14m centres make use of the largest cold-formed purlins and rails available and provide a structure that is light, well-proportioned and with the minimum number of pieces. In addition the structure accommodates four large EOT cranes up to 200 tonnes capacity. The 3000 tonne plus facility is located within the Naval Base at Portsmouth and forms part of a £40M development. The contract was awarded on a design-and-build basis with WSSL being responsible for the complete design, construction and final finishing of the superstructure.

The client’s requirements were contained in a number of specifications. The following list identifies some fundamental requirements. 

The structural form consists of columns supporting crane beams and lattice roof trusses. A key decision to be made in the design process was the spacing of the main frames. Due to the height of the building and the requirement to carry large crane loads, the most economical solution was found to be the adoption of the maximum possible spacing of frames. This was dictated by the maximum available span of the cold-formed purlins and rails, which was assessed as 14.5m. The bays share a central column at the junction of the two bays. Bay A1 has permanent gable columns to the north and south ends of the building. Bay B1 has permanent gable columns at the south end, albeit in temporary positions to allow for future extension, and two independent 30m x 23m vertically operating fabric doors at the north end. The doors share a removable central post which is raised and lowered using a series of winches to provide a maximum opening of 30m x 46.7m. 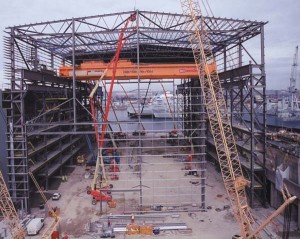 There are positions where the client’s requirements precluded using the two-span frame at 14.5m spacings. In two positions in bay A1, 15m x 16m doors are incorporated and result in the lattice columns splitting 29m into an 18.5m bay and a 10.5m bay. The roof trusses remained at 14.5m spacing necessitating the use of an eaves level truss to span the 18.5m bay to transfer the roof load.

The requirement to provide a 25m x 18m clear opening between bays also precluded using a lattice column on shared gridline 2 on grid B. As a result the crane beams were designed to span 29m resulting in a maximum I-beam plate girder size of 3160mm x 800mm weighing over 50te. 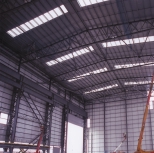 The main 23m x 30m launch doors take up the majority of the North gable of bay B1. There are clad areas to each side of the launch doors and cladding above the door up to the roof. The door framework consists of two box section outer posts, a clad lattice framed central removable post, and two composite door header beams. The composite door header beams carry the weight of the door and also span horizontally between centre and outer door posts to resist wind loading. The composite beams are also restrained via braces up to the roof level bracing system. When the central post is in position and the doors closed, wind load is transferred to the top and bottom of each post. Loads are resisted at the foot of each post by the base connections that incorporate shear keys. Loads at the top of the outer door posts were transferred directly back to main roof bracing system.

The environment for the steelwork was classed as marine aggressive and the life to first maintenance was to achieve 10 years. The corrosion protection system used for the majority of the steel was 240 microns of an Epoxy Zinc Phosphate primer/MIO build coat in a dark grey shade. Kick flats and stair stringers to the walkways and platforms were the exception having 175 microns of the primer/MIO plus 50 microns of an acrylic urethane gloss in yellow. Both systems gave a minimum life to first maintenance of 15 years.

The erection was carried out using a combination of 200tonne crawler cranes for the elevations and roof, 100tonne crawlers for assembly and general erection and 50tonne mobiles for miscellaneous erection and assembly of walkways. Erection proceeded at the rate of one week per bay for buildings A1 and B1 giving a total of approximately 18 weeks to erect 3055 tonnes.

Whilst the building is generally unheated, the roof cladding is insulated to minimise condensation. The wall cladding however was retained as single skin since the effects of condensation were considered less severe than on the underside of the roof.

An important maritime manufacturing facility located in this historic naval dockyard. This is an industrial building on an impressive scale, housing two tiers of heavy-duty overhead cranes. It is the marriage of traditional steel structural forms, scaled-up to optimise the use of secondary framing components that has produced this most efficient structural design solution.