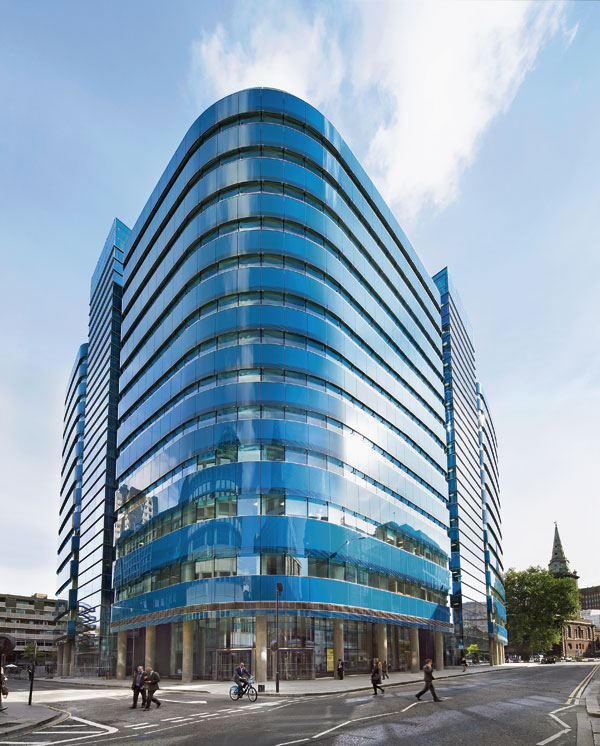 A large modern commercial building in the City of London has utilised steelwork’s flexibility and long span qualities to achieve its uninterrupted floor plates and centrepiece atrium.

The client’s brief for the St Botolph Building project was for a landmark City development featuring significant architectural merit, while providing flexible office space suitable for the insurance, banking and legal professions.

The project’s steelwork is crisply detailed throughout the floors, glazed atrium bridges, and even to the slender lift core supports. This is an exceptionally stylish commercial building, showing steelwork to great effect, say the judges.

A large proportion of the project’s steelwork has been left exposed, clearly displaying its structural function. In the central passenger lift core very tight construction and positional tolerances were achieved. This was necessary to get coordination between the four separate contracts that formed the building’s centrepiece lift core: primary steel, architectural steelwork, cladding and the lifts.

The lift core is an innovative steel and glass structure visible throughout the building. The engineering of this structure is deliberately displayed with all of the steelwork and lift gear exposed against the calmer background of the atrium walls.

RHS members have been used to frame the atrium, but as there are considerably more loads further down the structure, fabricated box sections have been utilised for the lower levels.

“The fabricated box sections are stiffer and can accept greater loads, but they have been designed to look identical to the RHS members used on the higher levels,” explains Arup Engineer, Richard White.

Meanwhile, at higher levels of the structure four atrium bridges brace the steel frame and provide access to the floor plates. The adjacent structures have been designed for future installation of additional bridges, allowing for future flexibility.

“The project’s efficiency could not have been achieved without steel,” says Mr White. “The steel frame allowed the large structural spans and uninterrupted floor plates, while the use of Fabsec beams meant all services were easily accommodated within the frame’s structural void.”

Externally the form of the building is said to be articulated along each elevation by the expression of perimeter service cores framed in steel with the stairs, lifts and boiler flues on display.

The steelwork of these elements is clearly articulated internally and externally. The perimeter stairs were designed as prefabricated steel assemblies, capable of spanning between framing members and bracing the perimeter core structures. This design eliminated the need for temporary works and early completion of the stairs provided safe access for trades following on behind the steel erection.

The innovative use of steel extended to the project’s temporary works. Steel assemblies built on level eight of the building transferred the load of four tower cranes directly into the superstructure. This allowed the lower crane mast sections to be removed so that completion and fit-out of the floors below could commence early.