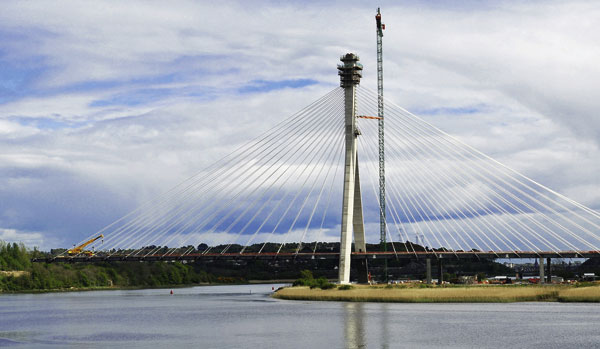 The new cable-stayed road bridge over the River Suir forms an integral part of the Waterford bypass, and has played a major role in alleviating congestion in and around the Irish port.

After a number of years of consultation Waterford has a new river crossing which forms an important part of the 18km-long Bypass which opened in 2010.

The overall scheme includes a number of viaducts crossing smaller rivers and railway lines, and this led to feasibility studies to identify the best route for the major crossing of the River Suir. The selected location for the bridge was chosen mainly for engineering factors, but also as the best option for port traffic and the continuity of the bypass.

A cable stayed bridge was then chosen as it would require no piers and consequently it would have a reduced environmental impact. This design also provided the option of a reduced deck thickness, offering a greater navigation clearance of 14m.

The design of the bridge consists of a central 100m-high inverted Y-shaped tower which supports the 230m long main deck via cables arranged in an asymmetrical twin fan configuration. Overall the 465m long bridge has the distinction of being one of Ireland’s longest span bridges. 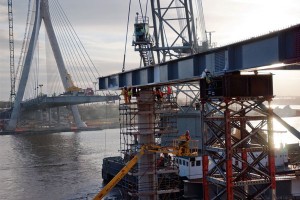 The ladder deck structure carrying the dual carriageway across the entire span was made up of 80 main girder sections, each weighing approximately 18t.

“The fabrication of the main girders for the cable supported section included some elements of complex geometry in the hangar locations. With large welds and complex angles, dimensional control in these areas was critical,” says Richard Selby, Mabey Bridge Head of Projects.

Two box sections at the north abutment, each weighing 170t, were manufactured at Mabey Bridge’s workshop in segments and welded into full lengths on site. A total of 102 10t cross girders were made in full lengths of 20m, and due to the width of the road deck and in order to maintain as low a deck weight as possible, the tops of these girders were profiled to follow the camber.

Erection of the bridge was completed in two main stages. Firstly the back span, up to the central pylon, was erected from ground level, using mobile cranes to erect the steelwork which was supported on trestles. Once the precast slab had been completed on this portion, the front span was erected in cantilever from the pylon using a modular technique.

“The back span is mostly over land, so we were able to erect it in a conventional manner,” explains Mr Selby. “The front span over the river required us to use a crane positioned and working on the completed bridge deck and this had to move forward sequentially as the deck was erected.”

Each module, consisting of two main girders and cross members, were delivered piece-small up to the erection crane sited on the cantilevered end of the deck. Over a seven day cycle each module was erected, the cables installed and pre-stressed, and the precast concrete deck positioned. In conjunction with the modular build, a supported section of the front span was also erected, with the aid of the largest available floating crane in the UK – the 1,000t capacity Mersey Mammoth.

In summary, the judges say this is a high profile cable stayed bridge that helps to generate pride in the community and satisfies both client and users.