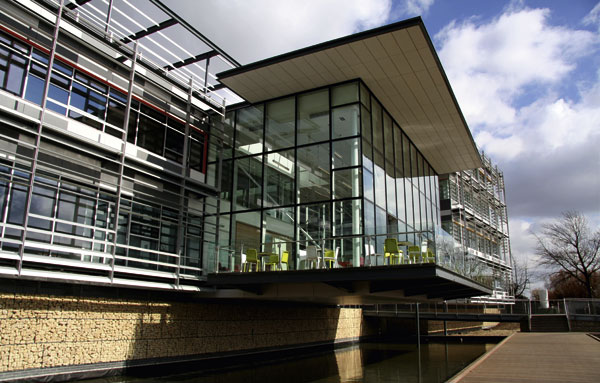 Incorporating a strikingly large cantilever over an adjacent water feature, the Hauser Forum project has used structural steelwork to achieve all of its architectural aims.

A mixed-use development at the University of Cambridge’s West Cambridge site, the Hauser Forum forms the latest stage in the expansion of the university’s science and technology campus.

The project consists of two steel framed structures, the Cambridge Enterprise Building (CEB) that incorporates a double height cafe space which cantilevers 11m from the southern facade, and the Broers Building – a four-storey research and development office block.

Both buildings are visually connected by a high level steel canopy which covers a landscaped space between the two structures. As well as representing the connection between the two buildings, the canopy also serves a practical purpose in providing solar shading.

As well as the canopy, the project retains a large amount of exposed architectural steelwork. Aside from its aesthetic qualities, steel was chosen for both buildings to enable the project team to meet the architectural aspirations and to help achieve a very tight programme. 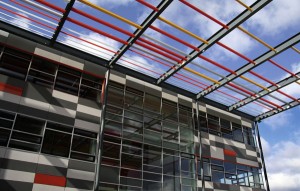 “The cafe cantilever was the overall the driver for steel,” says Steve Buckley, Mott MacDonald Project Engineer. “It’s a substantial 11m cantilever and would have been extremely difficult to achieve in any other material.”

Supporting a double height fully glazed cafe, the cantilever in the CEB also includes a terrace extending beyond the building’s enclosure. Delivering this architectural feature, while also meeting vibration limits for occupant comfort and deflection limitations for the proposed curtain walling system, led to significant analysis being completed by the design team.

Large steel trusses, using Macalloy tension rods as the diagonals, were used to form the cantilever. An additional pair of tie bars were added in the southern facade, these were needed to limit serviceability deflections of the 13.5m single span fabricated box floor beam.

Extensive consultation was needed with the construction team into how the cantilever could be built safely. It was erected on temporary props with a precamber of 35mm to counter overall dead load movements and to leave it with an aesthetically pleasing slight upward camber.

Once the cafe floor slab had been poured, the Macalloy rods in each elevation were stressed to lift the structure off its temporary seating, which allowed the props to be removed.

Another benefit of using steel for the entire project was the fact that the CEB’s natural ventilation strategy needed to incorporate exposed concrete soffits, something readily achievable with a steel frame. “Ordinarily this would have driven us towards a concrete building, but we incorporated the concrete soffits into the steel frame by using the Tata Steel Slimflor system with voided Omnia precast slabs,” adds Mr Buckley.

Summing up, the judges say this is a good example of practical steelwork design integrated into an intelligent solution.