Seven up for schools

Posted on March 12, 2016 by NSC in Projects and Features, This month's featured stories 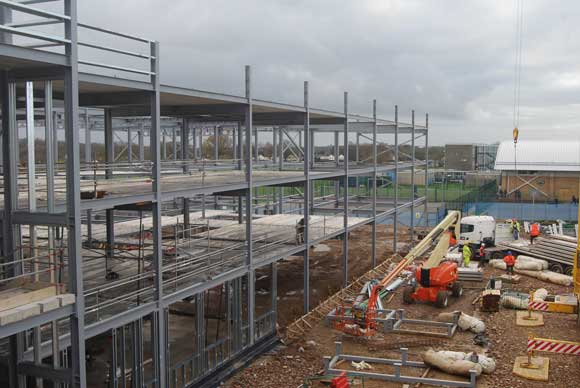 Steelwork goes up in front of Longdean’s retained sports hall

As part of the Government’s Priority School Building Programme, Interserve and Kajima Partnerships JV has been awarded the design and build contract for seven steel-framed secondary schools north west of London. Martin Cooper reports from the Home Counties.

Spread across Hertfordshire, Luton and Reading, seven replacement secondary schools are currently under construction as one of the first batches of the Education Funding Agency’s Priority School Building Programme, PF2 private finance model.

As well as the design and build contract, Interserve and Kajima JV will be responsible for all hard maintenance services over a 25 year period.

“What is now needed is a transparent pipeline of further projects to build on the experience and capability gained.”
Construction started on all schemes in March 2015 with the final school due to open in November 2016.

To create a cost-effective and efficient construction programme, the team has developed a solution that standardises the classroom design and allows for similar corridor layouts.

Predominately three storeys high, each school benefits from a large centrally-positioned atrium, which acts as a conduit between separate teaching blocks.

Interserve’s Associate Director Andy Pearson says: “All of the schools have similar design principles, although their layouts have been adapted to fit into their respective footprints, some of which are on very tight sites.”

A steel-frame supporting precast planks has been chosen as the most cost-effective design for all of the main school buildings. Long-span areas such as sports halls and assembly halls are formed with cellular steel beams, with the exception of the sports hall at Reading Girls’ School.

Due to the lack of space on site, this sports hall is spanned by a series of 18m-long transfer beams that supports construction of classrooms above.

Approximately 50 per cent of all classrooms are formed around a 7.2m by 7.8m grid pattern. Where a larger room is required, the standard structural grid is maintained and additional beams are provided where necessary, to avoid locating columns within rooms.

These are achieved through taking advantage of the high thermal mass qualities of the composite design, which is able to absorb and store heat. This in turn reduces the requirements for mechanical ventilation and cooling, which contributes to an overall saving in running costs of each school.

Senior Engineer at Arup Mike Wood says: “To mobilise the thermal mass effectively, the precast plank soffits are left exposed in all of the classrooms.”

All of the schools are being built adjacent to the existing premises, while maintaining sports pitches and other sports facilities. Once the new buildings are occupied, Interserve will demolish the old schools and create new car parks and improved sports pitches.

The only exceptions to this were at Goffs School near Cheshunt, and Stopsley High School in Luton. Here the sites are particularly tight, therefore demolition of some existing buildings had to be completed before the construction programme got under way.

At both of these schools, temporary classrooms have been provided for the duration of the project.

Interserve is also taking the opportunity to aid the local communities while constructing the school.

Top of the class design

The Longdean site is also the only one within the seven-school programme not subject to a confined and tight working footprint.

Construction work is taking place adjacent to the old school. Once the new build is open to students in November 2016, work will commence on demolishing the old structures with the entire job completed in June 2017.

Longdean is one of only two jobs in the programme where a retained sports hall is being incorporated into the scheme. This stand-alone structure was only built in the 1990s and is still suitable for the needs of a modern school.

This site is blessed with space and, due to Longdean’s central position to all of the other school projects, Interserve has set up its main office compound here.

The new build consists of two structurally independent steel-framed teaching wings positioned end-to-end and separated by a movement joint. The meeting point of the two blocks accommodates the school entrance and a full height atrium. 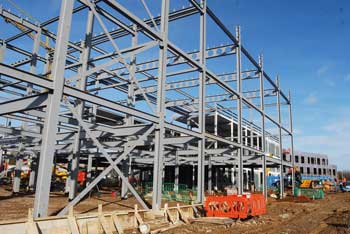 The braced frames are erected around a regular grid pattern

Although the atriums at the schools all differ in size and shape, depending on the individual school design, each one is a full height open void, spanned by link bridges and topped with a glazed roof light.

These large open voids also play an integral role in the structure’s ventilation system by keeping the surrounding classrooms cool.

Interserve’s project manager for Longdean Lee Williams, says: “The rectangular teaching wings are both three-storeys high, although one of the structures incorporates a lower ground floor covering about 20 per cent of the project’s footprint. The design incorporates the site’s slope, so one block has some additional teaching space.”

Hambleton Steel Contracts Manager Doug Willis, said: “It made sense that the steelwork contractor installed the precast elements in and around the steel frame, not just to make sequencing between trades easier, but also because we had the craneage already on site.” 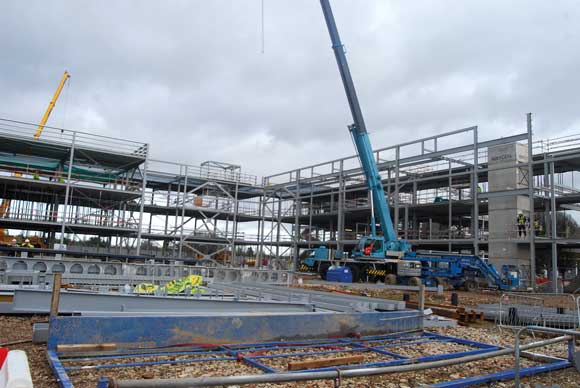 Plans for the school to undergo a major development were initially submitted to the local council back in November 2013. The rebuild will replace the existing secondary school and help increase its student capacity from 1,085 to 1,180, while also improving the quality of facilities at the school. It is expected to be finished in July 2016.

Interserve’s Project Manager for Kings Langley School John Harvey, says: “It’s a very tight site, which of course presents a number of challenges we’ve had to overcome; such as having to bring in materials on a just-in-time basis as there’s little room for storage.”

“We also have to share an entrance with the school so all deliveries have to be timed so as not to coincide with its opening and closing times.” 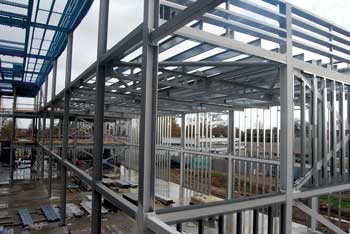 The new school is a three-storey structure containing a large central atrium and an attached sports hall.

Based around the standardised grid pattern, the school contains all of the programme’s principal elements such as bracing secreted in partition walls and many offsite-manufactured components.

One of the main standardised steel components is the steel-framed roof lights that adorn all of the school’s uppermost corridors. These are fabricated by the steelwork contractor and brought to site as completed units, measuring 2m × 1m, and then installed along with the roof steelwork.

The school will also be getting a new drop-off zone to ease congestion on surrounding roads, with a new turning circle which has enough space for eight coaches, and a covered outdoor amphitheatre. 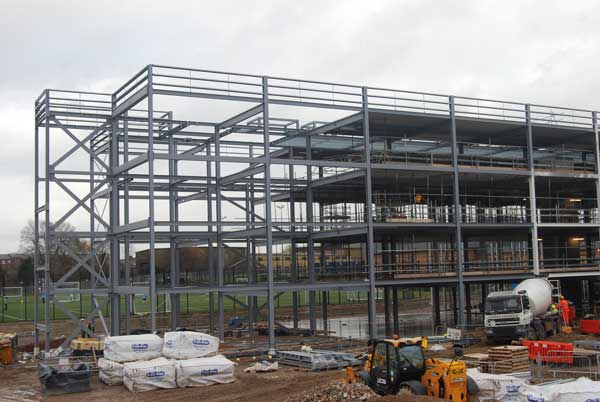 Westfield has the most pupils and consequently the design needed to accommodate sufficient classroom space while also blending the structure into its surroundings.

As none of the nearby buildings exceed three-storeys, a four-storey structure would have ordinarily stood out. However, taking advantage of the site’s sloping topography, a four-level structure has been erected, which from a distance looks like it only has three levels.

Project Leader at Maber Jonathan Coleflax says: “Due to site constraints we were unable to increase the school’s footprint, so a further storey has been introduced to achieve the requirements of the school. By utilising the existing topography of the site, the lowest floor appears below ground level, giving the appearance of three storeys when viewed from the main road.” 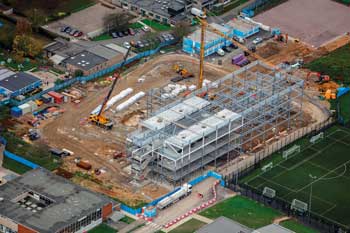 Access to the new school from the existing school’s site, which also includes a retained sports hall, is via a footbridge. This pedestrian link enters the structure’s entrance hall/atrium at first floor level, which again accentuates the building’s three-level appearance.

Also within the atrium is a movement joint that structurally separates the two steel-framed school teaching wings.

In keeping with the programme’s standardised design, bracing that is predominantly located in corridors provides the structural stability.

The only exception to the standard design is the steel frame supporting precast planks in the school’s second floor assembly hall, which is a double height space spanned by 18m-long cellular beams.

Hambleton Steel erected the steel and installed the precast units using one mobile crane and two erection gangs each working on one of the school wings.

The steelwork programme was completed in January and the new Westfield Academy is due to be open in time for this year’s autumn term. 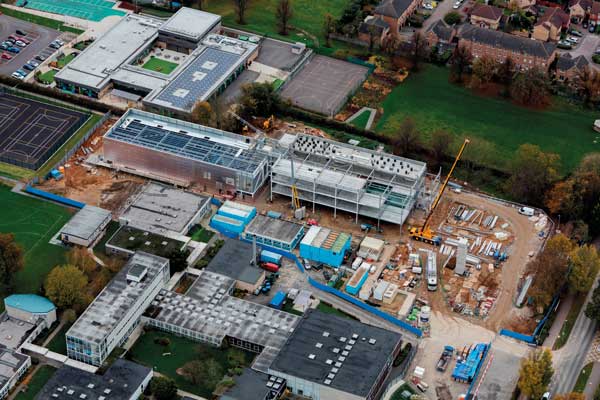 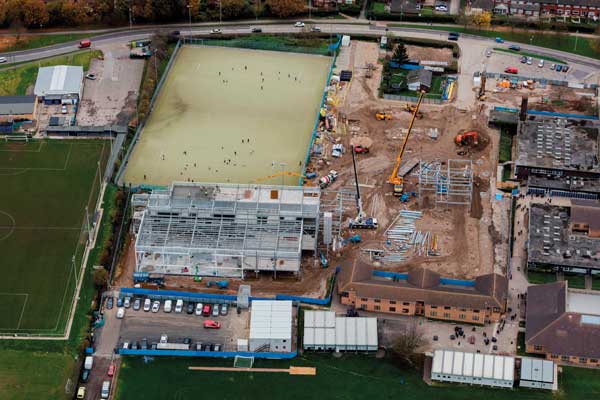 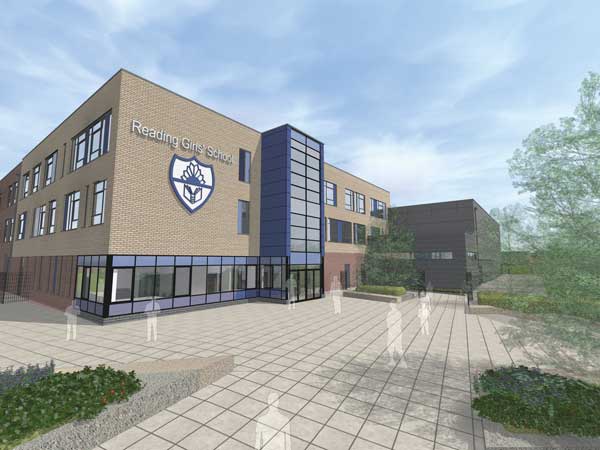 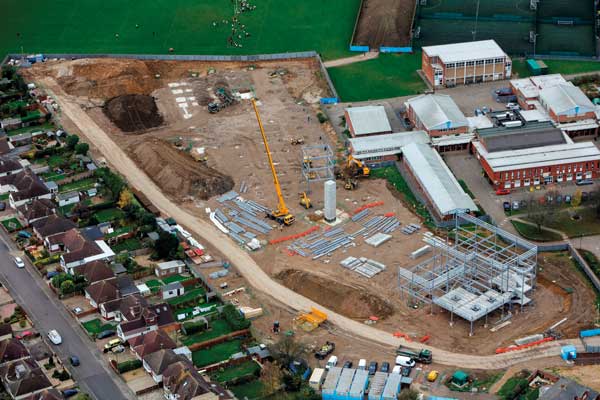