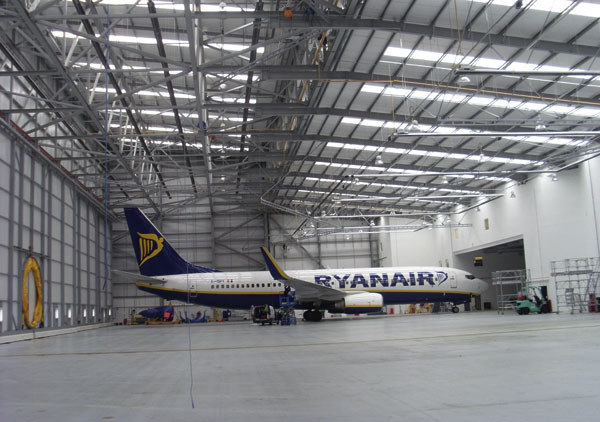 With a clear span of 125m Ryanair’s new cavernous hangar can accommodate up to five Boeing 737s.

Not far from Stansted’s main runway and within sight of the passenger terminal a new hangar capable of accommodating five 737s is up and running. This huge structure has a large clear span of 125m, an apex height of 25m and an overall building depth of 60m.

Working on a design and build contract Barrett Steel Buildings had to overcome a series of engineering and logistical challenges to lift the hangar’s three 125m-long steel trusses.

Design solution initially involved erecting the hangar’s framework, including large 25m high columns to support the trusses. Once this was complete a multi crane lifting operation, to erect the roof trusses, was able to begin.

“We wanted a rigid box which would then enable the following two trusses to be braced back to it securely,” says Chris Heptonstall, Associate Design Director at Barrett Steel Buildings. 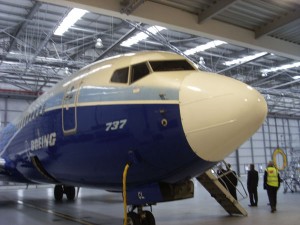 Two more lifting operations then took place to install the second and third trusses. These large sections were also assembled at ground level, but in three equal lengths. They were then lifted individually, by one 100t capacity mobile cranes, and spliced together while suspended in the air.

While the three sections of the truss were being spliced together another 25t capacity mobile crane was used to install the bracing which connects trusses back to the rigid box which was initially erected.

The roof trusses are all pre-cambered to take out the dead deflection and all connections are friction grip using TCB bolts. “We chose TCB’s for their speed of fixing and the surety that the full slip potential was guaranteed,” adds Mr Heptonstall.

All of the trusses were fabricated 50mm short of the supporting columns, and specially designed packs were installed to make up the difference during installation.

The three day lifting operations were the highlight of the steelwork erection, but before this Barrett Steel Buildings had already constructed the entire braced frame of the hangar and an office area, while main contractor Kier Eastern had undertaken a month-long earthmoving operation.

Nick Bache, Director, Kier Eastern, says: “During the selection process of the contractor Barrett Steel Buildings became the obvious choice as they were not only technically very able but also passionate about providing a service. They were an integral part of this very successful project for Ryanair.”

To conclude, the judges says the project is a fine example of an optimised long span structure, at minimum cost with fast erection.