The steelwork was complete within five weeks

A mystery is lurking in the swamps in which airfields are built. From the murky miasmas of many Much-Bindings-in-the-Marsh have risen the skeletons of elaborate entities of a type unable to survive in the harsher environments of commercial buildings. The bones of these skeletons, like Pterodactyls, Pterododous and Quetzelcoatluses, are often hollow, but unlike these dinosaurs, they will never fly; the hollow bones have not been used to save weight; on the contrary they have often been arranged in perverse patterns unknown in the rest of nature making them heavier than simpler and more viable structures. Reproduction of these various species is rare; very often the parent dies in the throes of birth; but even if it survives, the pain of disgorging such unnatural lumps often prevents to participants from trying again.

The mystery is: why?

Simple structures are almost always best. Regular portal frames can accommodate most aircraft types very cheaply; the old myth that space frames are more economical on 60m or 70m spans cannot be demonstrated in commercial practice – look at the picture of the Emirates hangar, designed, fabricated, galvanised and shipped in eight weeks, and erected in another eight weeks! But portals two have three problems: that of deflections – both relative and absolute – the need for horizontal reactions needed in the columns – and availability of big enough sections.

Out of plane members eliminate relative deflections – but absolute deflections can be a problem. Large apertures hinder horizontal restraints which can only be achieved with ties or load sharing horizontal beams. And above about 70m the economical beams run out.

These were the problems faced by John Reid & Sons Lid (REID) of Christchurch in their design-and-build contract for F R Aviation at Hurn. The 85m clear span (20m wider than the biggest commercial jets!) made portals just economical. The requirements to limit deflections led to the use of welded truss rafters, made from simple hot rolled sections; out of plane trusses of light tubes made these into an effective space frame eliminating relative deflections. 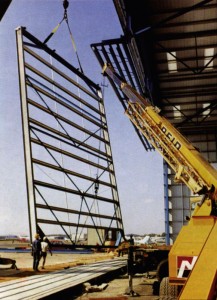 One of the eight electrically operated doors being hoisted into place

The main trusses produced small horizontal reactants, thus making it easy to miss out columns above the side-opening aircraft doors.

The completely open 85m front door frame made it necessary to brace the whole structure into a torsional box, with union jack bracing in the roof and three sides – wind loads, spread across the entire width and depth of the hangar, disappeared without trace into the footings – an important point as REID was contracting a design and build package and there was no point in saving money on steel if it necessitated huge cantilevered bases, especially if these cantilevers were to use up part of the door space.

Incidentally REID also designed and made the 85m electric doors including the tall boom door – putting all these together led to a cost effective solution all round.

All site connections were simply bolted with 8.8 tensile bolts. The erection was carried out using normal cranes and cages. The cladding is straightforward two-skin industrial cladding.

If space is needed between the trusses, there is space for squash courts between the members!

This structure is far too simple and straightforward to win awards: but it works! So why are complex, obesely overweight structures regarded as the norm and, like the freak from Devizes, do they win prizes?

The finished job. This hangar will be used for converting big jet liners into fuel carriers for refuelling in flight